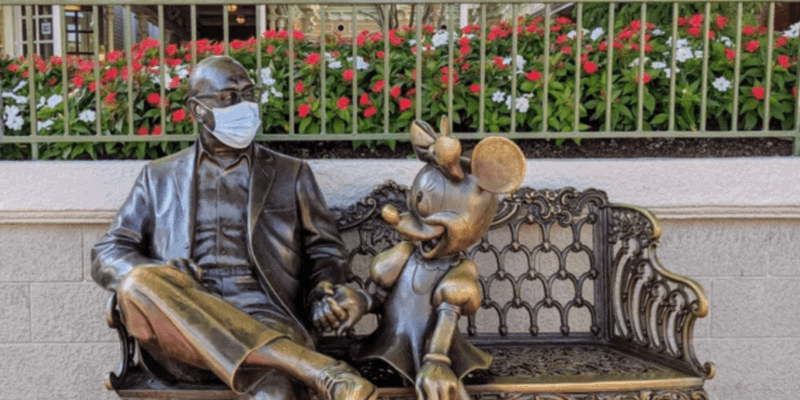 Recently, a photo emerged on Reddit showing that someone put a face mask on the Roy O. Disney statue at Magic Kingdom. There’s no word on how long this lasted — and many speculate whether it was a Guest or even a Disney World Cast Member who did this as a way of reminding Guests to wear a face-covering during their visit.

Here is what the Roy statue looks like without the mask:

And here is the statue with the mask:

This photo was posted on Reddit by user u/charliezard7 — a Cast Member at Magic Kingdom who did not put the mask on the statue, but instead came across it. You can read the entire Reddit thread here.

This statue is of course found in Magic Kingdom at Walt Disney World Resort. It depicts Roy Disney sitting on a park bench with Minnie Mouse.

The “Sharing the Magic” statue is described by Disney Parks Blog as one of the most prized photo locations ever:

The iconic park bench occupied by co-founding father Roy O. Disney seated next to Minnie Mouse greets millions of guests each year and is one of the most prized photo locations ever. Although it was originally placed inside the fence in Town Square at Magic Kingdom Park, guests routinely climbed over it to sit next to Minnie. Within a year, it was relocated just outside the fence. Guests may feel that the empty space to the right of Minnie was made for them, but Blaine’s intent was to show Minnie’s conscious decision to sit right next to Roy as a way to make him more “approachable,” as he was rarely in the limelight as was Walt.

Of course in the pandemic-era world, in order to visit Walt Disney World Resort, you must wear face coverings at the theme parks, in hotel common areas, and at Disney Springs. Disney has been very strict about these rules as they want to ensure a safe environment for both Guests and Cast Members. If you do not comply with face-covering rules, Disney will remove you from the parks.

While some Guests have continued to fight against Disney World face mask rules, Disney World has held very firm to their new health and safety regulations.

We would not be surprised if Walt Disney World put a mask on Roy themselves since they have been getting creative with encouraging Guests to wear face coverings! Disney Cast Members have even used masked Mickey Mouse plush toys to encourage Guests to wear their masks. However, since the masked Roy statue is technically an act of vandalism, it can only be assumed that it was a Guest who did this.

Here is a link to the official Walt Disney World website, where you can read up on all of the new health and safety procedures at the parks so you are ready for your next visit!

What do you think about the face mask on the Roy Disney statue? Let us know in the comments!

We can help you plan the perfect Walt Disney World vacation, click here for more information!