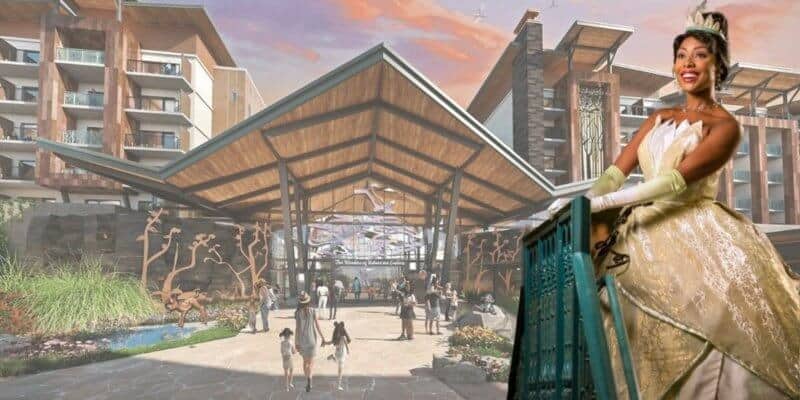 Reflections — A Disney Lakeside Lodge, which had already begun construction prior to the pandemic, has had no updates or has even been mentioned by Disney in quite some time. But now, a new permit indicates that the project has been put on hold indefinitely, or possibly even scrapped completely.

Here’s everything we know.

Related: Amid Cancelation Rumors, Construction on Reflections to Continue

The previously announced Disney Resort was planned to be built on the same land as the old River Country water park and was even set to have a The Princess and the Frog-themed restaurant! Since the Lakeside Lodge is set to be inspired by the wonders of nature and artistry of Walt Disney, it’s only fitting for it to be the new location of a Princess and the Frog-themed restaurant, since that film features stunning animation of the natural beauty of the bayou.

Additionally, in the artist renderings (below) of the property, we can clearly see that the lobby was set to feature a Pocahontas statue!

Before the pandemic hit, work on Reflections already began, however, in more recent months, rumors began circulating that Disney pulled the plug on the project.

In case you missed it, Reflections — a Disney Lakeside Lodge was removed from Disney’s press releases despite the company not having made a formal announcement that there may have been a change in plans. Now, the interesting thing is according to a new permit that has been filed, it looks as though they are removing the construction offices onsite. This leads many to believe that, if there are no need for the construction offices on the property, then perhaps work will no longer be taking place.

Though, again, nothing has been confirmed at this time. If construction offices are being removed, it looks to be a sign that the project could be delayed or possibly canceled completely for the time being. We, like many others, were certainly excited for this new Disney Resort to open in the future, but given the lack of updates from Disney, it seems like this is one project they are not hyping up at all right now, and the company is dedicated to completing other projects instead.

At the time of publication, Disney has not made an official announcement regarding Reflections — A Disney Lakeside Lodge, but Inside the Magic will keep you updated as we get information.

In regards to projects that are confirmed to be moving forward and expected to open in 2021, be sure to read our article here. From Remy’s Ratatouille Adventure at EPCOT in Walt Disney World to the newly renovated Snow White’s Scary Adventures attraction — renamed to Snow White’s Enchanted Wish — at Disneyland Resort, Guests have so much to look forward to this year.

What do you think is happening with Reflections? Do you hope this Disney Resort eventually opens? Let us know in the comments below.

If you want to visit a Disney Park on your next vacation, start planning today!