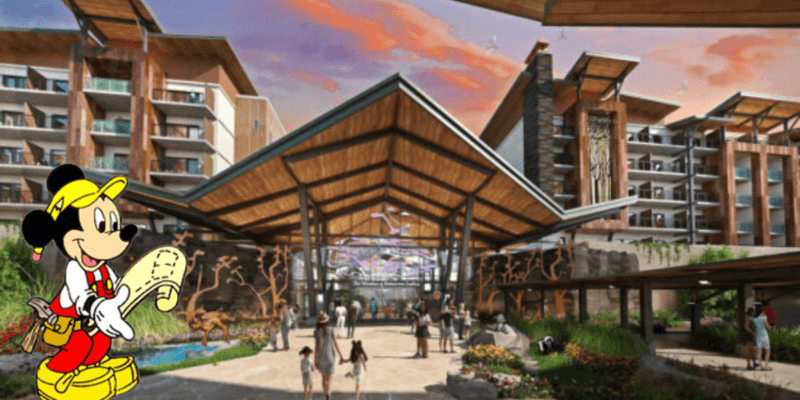 While construction zones sit empty across the Walt Disney World resort, progress still attempts to move ahead for one project: the 900-room Reflections: A Disney Lakeside Lodge.

According to the Orlando Business Journal,

Six new notice of commencement filings, which signal the start of construction work, have been submitted to Orange County for work at addresses near and around the future 900-room Reflections: A Disney Lakeside Lodge project. The contractor on the permits is Balfour Beatty Construction LLC, which has been the speculate builder for the new resort on the former River Country water park land.

And this all hints at what future guests have been told to expect from the new resort, particularly access to the Magic Kingdom Park by watercraft across Bay Lake, and Tiana’s Restaurant themed off of the animated Disney classic, Princess and the Frog. It will also include beautiful villas for Disney Vacation Club members.

The limited construction is meant to abide by the precautionary measures set forth by state and local governments as well as those from the Centers for Disease Control and Prevention while also attempting to make some progress on the immense amount of work that lies ahead of them.

In a statement, Balfour Beatty stated the following:

“As an essential business, we have a responsibility to keep our projects operating while we modify the way we deliver work to allow for the new and necessary health and safety measures that are now required as a result of this pandemic. The practicalities of how to implement social distancing in the field are complex and our workforce is committed to meeting these needs, knowing that each decision has an impact on not only the team’s ability to deliver and our production flow, but the health and wellbeing of everyone.”

Reflections is only one of a plethora of projects underway scattered across the Walt Disney World, including the TRON Lightcycle roller coaster at the Magic Kingdom, a Star Wars hotel, and EPCOT’s park-wide revamp that includes new attraction like Remy’s Ratatouille Adventure, and Guardians of the Galaxy: Cosmic Rewind. But any progress made is better than no progress at all.

Are you excited for Reflections: A Disney Lakeside Lodge? Let us know in the comments!