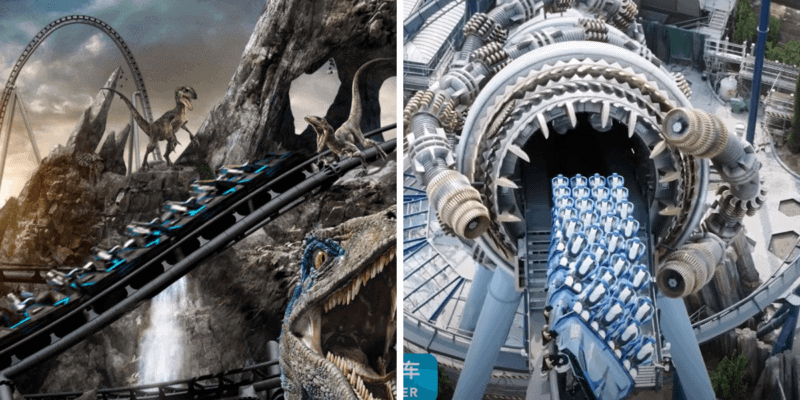 Today we are going to break down each coaster and what thrills fans can expect from both!

The VelociCoaster will be opening to Guests this summer, though no official date has been announced just yet. VelociCoaster is based on the Jurassic World franchise and will feature raptors such as Blue from the films. The upcoming coaster has a max speed of 70 mph and will combine several thrilling inversion maneuvers including a heartline roll.

There is so much to love about this coaster, including the look! It brings some fresh life into the Jurassic Park-themed area, and ties in with the Raptor Encounter meet and greet nicely.

Over in China, Universal has been working diligently on a brand-new theme park — Universal Studios Beijing at Universal Beijing Resort.

Interestingly enough, despite Universal Studios Beijing hosting a Jurassic World Isla Nublar section of the park, it will not have the VelociCoaster coaster. Instead, the land will have a brand-new attraction, Pteranodon Flyers, as well as the Raptor Encounter meet and greet.

The biggest rollercoaster at Universal Beijing Resort — Decepticoaster — will be located in a new land called Transformers Metrobase, which will be themed completely to Transformers.

Here is how Universal describes the Decepticoaster:

Join Autobot Coaster, for a once-in-a-lifetime ride through the massive Decepticon Driller to observe how it processes Energon. But be careful, one wrong move and The Driller could be revving up its razor sharp teeth. You may be in for a wild ride!

While we do not have any stats from Universal on the Decepticaoster you can see that this is strikingly similar to another fan-favorite coaster that already exists at a Universal park — The Incredible Hulk Coaster.

Decepticoaster is similar but not identical to the Incredible Hulk Coaster, so there are a lot of new thrills to look forward to with this brand-new coaster, that is for sure!

Universal Beijing Resort appears to still be opening on time in May, and even recently announced soft opening dates for the theme park.

Once Universal opens Universal Beijing Resort, all eyes will be on Orlando as work on Epic Universe has resumed after hitting pausing due to the pandemic.

Which Universal coaster are you most excited to open? Let us know in the comments!