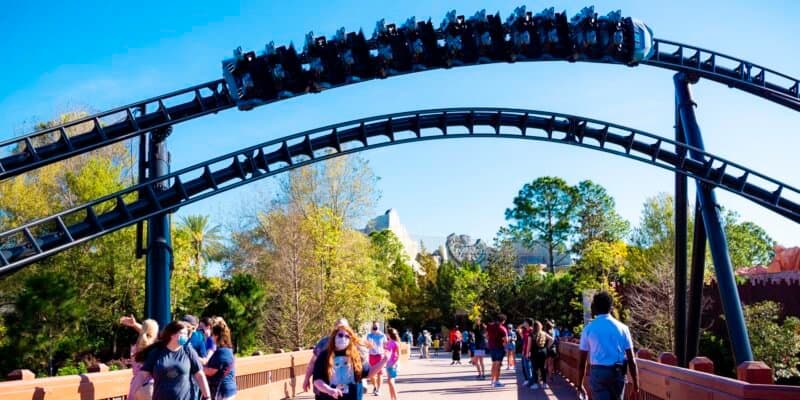 As summer 2021 approaches, the one thing that almost all Universal fans are excited about is the opening of VelociCoaster.

Universal has been heavily hyping up VelociCoaster through their social media as of late, which has left fans in a frenzy as we await an official opening date to be revealed. Because Universal’s Twitter account (@UniversalORL) is so engaged with its Guests, many have been reaching out to ask for an opening date for the new roller coaster.

Now, it seems that Universal has confirmed that no matter how much we ask, right now, they will not be telling us when VelociCoaster will open. But, that does not mean they will stop teasing us!

No, we can’t tell you when VelociCoaster will open. Yes, it will be awesome.

No, we can't tell you when VelociCoaster will open.

Yes, it will be awesome.

When fans of the upcoming Jurassic World VelociCoaster saw the Tweet, there were some interesting reactions!

Yeah honestly? I think you just one day open it. Don’t make a big deal just POOF it’s open. Because honestly? The mass of people you had at Hagrids opening? Probs not a great idea just yet

Yeah honestly? I think you just one day open it. Don’t make a big deal just POOF it’s open. Because honestly? The mass of people you had at Hagrids opening? Probs not a great idea just yet

This would be an interesting way to open the coaster. On one hand, after seeing the 10+ hour waits for some Guests endured for the opening of Hagrid’s Magical Creatures Motorbike Adventure, I understand wanting a quiet opening. But, if parks are still capped at 35% capacity this summer, then the line may not cause the same issue as there will be far fewer Guests in the parks.

Personally, I think they will announce an opening day for the coaster solely because there has been too much media on the coaster to let it open quietly, and Universal needs to keep tourism going to financially profit. But I also think that Universal Orlando Resort may use a virtual queue for the attraction to avoid crowding and long lines. With lines being socially distanced, a packed queue will likely span throughout the park, and a virtual queue can avoid all of that. That being said, this is all just my personal opinion.

You can, you just won’t. But shhhh….I won’t tell everyone that international Dinosaur Day just happens to be June 1st.

You can, you just won't. But shhhh….I won't tell everyone that international Dinosaur Day just happens to be June 1st. ?

Opening on International Dinosaur Day (who knew this was even a real day!) would be pretty perfect for the Jurassic-themed coaster. It also does fall into the summer 2021 category.

Dolly G (@MizDollyGee) seems to want what many of us Universal Orlando Passholders want!

Please please do a Passholder preview

Universal has done Passholder previews for new attractions in the past at both Universal Studios Florida and Islands of Adventure, so it wouldn’t be surprising to hear that they will do it again for VelociCoaster. Universal has also been very reliant on Passholders throughout the pandemic, so this would be a great way to continue the Universal x Passholder bond!

All of that being said, Universal is now allowing Guests to get up close and personal with VelociCoaster, which is a good sign about opening the coaster. The bridge that VelociCoaster rides past at Islands of Adventure is now open, which means Guests can stand right under the coaster!

Thanks to Orlando Informer (@OrlandoInformer), we can see that the coaster is testing while Guests walk past!

If you thought the newly reopened bridge looked good yesterday, here it is this morning with Jurassic World VelociCoaster running.

If you thought the newly reopened bridge looked good yesterday, here it is this morning with Jurassic World VelociCoaster running. ?? pic.twitter.com/QM0HDgTXB5

The majority of the Tweets are filled with many fans just wanting the coaster to open as soon as possible, and we don’t blame them! Considering this will be Universal’s most immersive thrill coaster to date, many of us cannot wait to join the prehistoric club and ride with some raptors!

Do you think Universal Orlando should set an opening date for VelociCoaster? Or should it be a quiet opening?