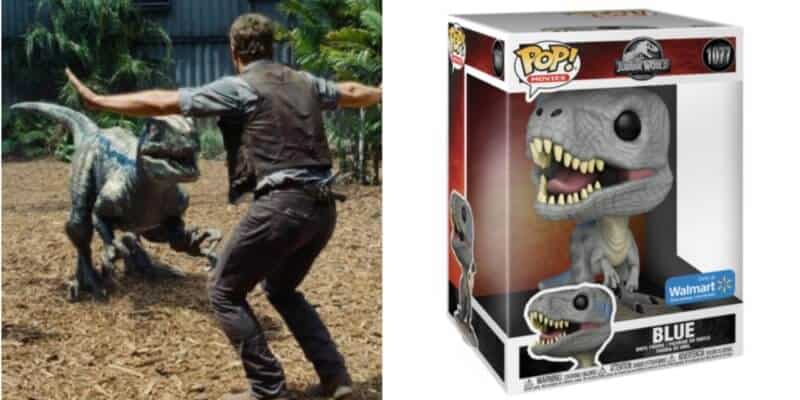 Universal Orlando Resort has already begun to launch merch for its upcoming attraction, Jurassic World VelociCoaster, set to debut at Islands of Adventure in 2021. Now, it looks like worlds are colliding as the latest Funko POP! available for pre-order is a certain Jurassic World raptor — and she looks oddly familiar.

Today, we have discovered the new trailer and release date for the popular series Jurassic World: Camp Cretaceous Season 3 on Netflix, as well as a giant 10-inch Funko POP! of everyone’s favorite velociraptor, Blue. You can order the giant Funko POP! for a pre-order price of $29.96. It is a Wal-Mart exclusive. The toy will ship on May 28 to any Jurassic World Funko fan who wants it!

The reason this reporter is so intrigued with the raptor, however, is that it matches the raptor appearance that we will see on the VelociCoaster ride. As you may know, VelociCoaster falls under the Jurassic World IP, which follows Owen Grady (Chris Pratt) — it is not based directly on the Jurassic Park trilogy. If you have seen Jurassic World (2015) Jurassic World: Fallen Kingdom (2018), then you likely recognize the blue-streaked raptor named Blue. In the attraction, not only do the raptors have blue stripes on their back, but the coaster itself appears to be a giant blue streak as it whizzes through the Universal skyline.

It seems pretty clear that the character Blue will be used in the attraction, which means that this brand new Funko POP! is not representing the dino on-screen, but likely, in the parks as well.

Plus, a giant vinyl figure version of the dinosaur will be an amazing addition to any Funko POP collector’s shelves.

At the moment, we are not sure exactly when VelociCoaster will be opening, but Universal has been heavily teasing an opening date, so many thrill-seekers are hoping to see one soon. The coaster will have 3-D screens (which we have even seen Blue appear on!) as well as statues, sound effects, and Florida’s fastest launch.

Related: Is Marvel About to Take Over DC Comics? Here’s Why it Could Happen

Now that Funko POP! is joining in on the hype (even if unintentionally) it seems that Jurassic World as a franchise is truly saturating the market at the moment, on shelves with collectible figurines, on screen, and soon, in theme parks. With all of the excitement the franchise is generating, it surely will only continue to grow as Jurassic World: Dominion races to a 2022 debut.

As a Universal fan, would you be interested in buying a Jurassic World Funko POP!?

Comments Off on Excited for Velocicoaster? Get This ‘Jurassic World’ Funko Pop!