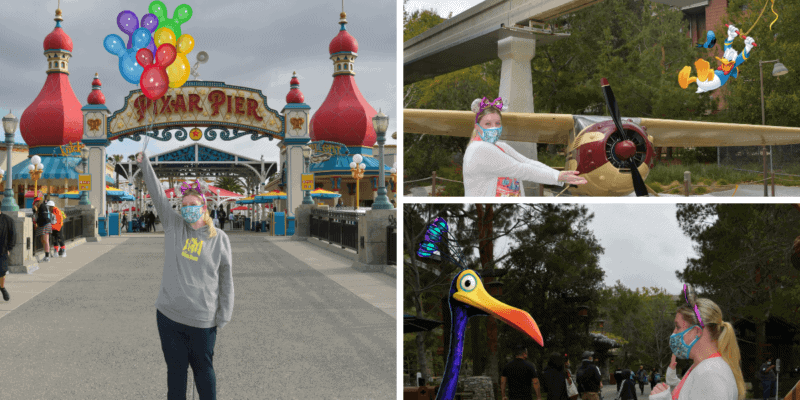 On March 18, Disney California Adventure opened up almost all areas of the park for Guests to enjoy the new temporary experience, A Touch of Disney.  With six booths featuring traditional Food & Wine festival eats, as well as Disneyland Park and Disney California Adventure classics available throughout the park (make sure to grab that Dole Whip!), there has been something for everyone to enjoy since the event began.

However, with the pandemic still ongoing throughout the country, there are still certain theme park experiences that cannot happen due to safety concerns. Beloved character meet and greets at Disney Parks are currently suspended, for example.

Instead of allowing Guests to have close interactions with characters at this time, Disney has multiple characters visible all around the park!

There are also fun, new photo opportunities, as well as PhotoPass Magic Shots for event attendees.

With trams unavailable, Guests have been walking to the event along the tram road and have been greeted by fun signs telling them that they’re getting closer to a churro cart.  In the tram drop-off area, Guests have also been able to take pictures of Autopia cars emblazoned with the Touch of Disney logo.

Once inside California Adventure, Guests have been able to make their way around the park and take selfies from a safe distance with their favorite Cars characters, including Lightning McQueen and Mater.  At the Inside Out Emotional Whirlwind attraction, Joy and Sadness have been found picture-ready.

You might even be able to take a socially distanced selfie like Disneyland President Ken Potrock did with Joy!

Guests have also been able to walk around and see classic characters like Goofy and Max fishing by Pixar Pier and Conductor Mickey, Minnie, Pluto, and Daisy at the Silly Symphony Swings.  If visitors take the Grizzly Peak route that passes by the Redwood Creek Challenge Trail and the Grand Californian Hotel, they may be lucky enough to spot the mischievous chipmunks Chip and Dale, as well as Donald Duck.

Remember: Unlimited PhotoPass downloads are included in the event admission for A Touch of Disney.

For Disneyland’s former Annual Passholders, now known as Legacy Passholders, there is a special photo opportunity right by Paradise Garden Grill!  Disney California Adventure is celebrating its 20th Anniversary and has a 20th Anniversary background, as well as a special button and magnet available for Legacy Passholders to take advantage of.  Simply show your Annual Pass to the Cast Member at the entrance to enter the exclusive area.

Be sure to take advantage of all of these amazing photo opportunities while at A Touch Of Disney!

Are you excited about all the fun photo ops?  Let us know your favorite one in the comments below!

Looking to book a Disney vacation?  Let our friends at Academy Travel help you out!  Click here to get started today!