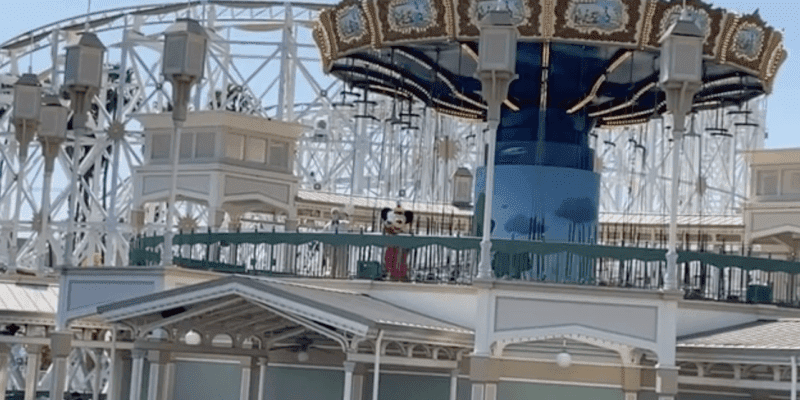 But, that’s not all, because Guests attending the event also have the opportunity to see Mickey and the gang from a safe social distance!

Related: Disneyland Resort Is Bringing Back Characters NEXT MONTH!

Inside the Magic was lucky enough to score opening day tickets and we are reporting to you from inside the theme park! Not only have we tried some of the food and beverage offerings, but we have spotted some Disney characters who are out and about at Disney California Adventure!

This is the first time in one year since we’ve seen Mickey and the gang due to the theme park closures, which occurred because of the current pandemic, and we are so excited!

We already knew thanks to Disney Parks Blog that Guests attending A Touch of Disney may catch a wave from various Disney characters from a safe social distance, including:

Well, we’ve spotted some of our Disney friends on opening day here at A Touch of Disney and wanted to share the Disney magic with you all!

Goofy and his son, Max, were enjoying a day in the sun fishing on Pacific Wharf! Goofy is decked out in a Hawaiian shirt and fishing hat, set for a full day on the water.

Mickey Mouse and Minnie Mouse were also out and about today — but not on Buena Vista Street! Instead, the iconic duo were spending time at the Silly Symphony Swings, waving to Guests and showing off their outfits.

Not to be left out, Mickey’s best pal, Pluto, also tagged along to greet Guests from the swings!

The fun wasn’t limited to Mickey Mouse and Friends! Miguel from Pixar’s Coco (2017) also made an appearance at A Touch of Disney today!

And, of course, no visit to Cars Land would be complete without a Lightning McQueen sighting! It’s so good to see our favorite race car back where he belongs in Radiator Springs.

Joy waving to Guests at Pixar Pier! Joy is even holding a core memory, perhaps she wants to remember the opening day of A Touch of Disney forever!

It is important to note that A Touch of Disney is a special ticketed event, and tickets are sold out for the event through its April 19 end date. There are no attractions currently operating as Disney California Adventure is not operating as a theme park.

For more information on this event, visit Disneyland’s website here.

In case you missed it, the major theme parks located within the state of California, including Disneyland Resort and Universal Studios Hollywood, received positive reopening news as they are now allowed to reopen in tier 2 at 15% limited capacity. However, we do want to note that once the theme parks do reopen, they can only host California residents only — no out-of-state Guests are allowed in this first phase of the theme park reopening.

Though at this time we do not have an exact reopening date or reopening guidelines for Disneyland Park or Disney California Adventure, Walt Disney Company’s CEO, Bob Chapek, confirmed that he hopes to have both theme parks at Disneyland Resort ready to reopen by late April.

In the meantime, Guests can soak up Disney magic by visiting the Downtown Disney District or if you purchased tickets, by attending A Touch of Disney at Disney California Adventure.

Are you planning on attending A Touch of Disney? Let us know in the comments below.