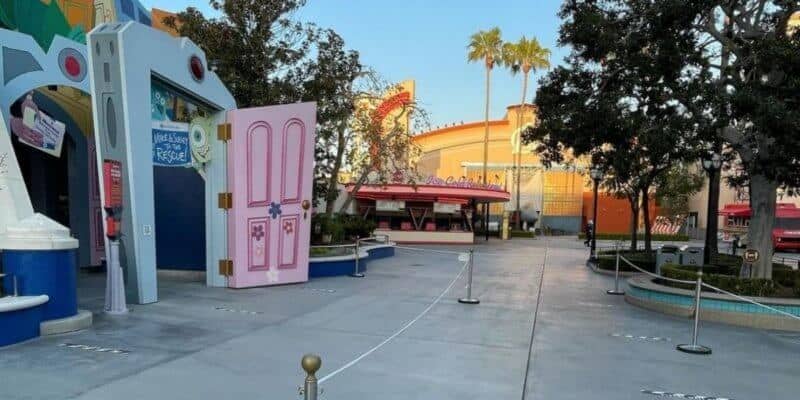 Disneyland fans have been itching to once again step foot into the original Disney theme park in California. And as we get closer to a hopeful reopening, it looks like Disney California Adventure is beginning to prep for Guests.

If you weren’t aware, in just a few days, Disney California Adventure will be opening up more of its theme park as they will host an event titled A Touch of Disney, which will bring Guests a selection of iconic food and beverage items from both Disneyland Park and Disney California Adventure as well as the opportunity to see Mickey and the gang from a safe social distance!

At this time, Disney California Adventure will only be opening its gates for this event and attractions will not be operating since this is not an event that is being held when the theme parks are technically open.

Now, it looks like the theme park is gearing up for Guests as social distancing markers and ropes have been installed near one of its attractions.

At this time we do not know if these social distancing markers are being installed as preparation for when Disney California Adventure does reopen as a theme park, with operating attractions, or if these markers are being placed for other reasons. Perhaps they could be installed for something relating to the upcoming A Touch of Disney event, which begins in just a few days.

Many people speculate that these markers could be used for the queues for photo spots (such as for character appearances or other photo opportunities, since PhotoPass will be available). One of Paul’s Instagram followers, Chelsea W. (@chelseaa.suee) suggests it could be for a photo opportunity of some sort, writing “I think it will be a photo spot!!”

Inside the Magic will keep you updated as we find out more information surrounding these social distancing markers found inside Disney California Adventure.

More on Monsters, Inc. Mike & Sulley to the Rescue

The official description of Monsters, Inc. Mike & Sulley to the Rescue reads:

Zip through scenes from the Disney and Pixar film Monsters, Inc. on a wild taxi ride with familiar scare-acters.

Venture inside the Monstropolis Transit Terminal and hail a taxi cab for a tour of the town. As your journey begins, an emergency “special report” is unexpectedly broadcast inside your cab—a human child is loose in Monstropolis and must be caught!

Help friendly monsters Mike and Sulley as they race to return little girl Boo safely to her home.

Can she find the way back before it’s too late?

In case you missed it, the major theme parks located within the state of California, including Disneyland Resort and Universal Studios Hollywood, received positive reopening news as they are now allowed to reopen in tier 2 at 15% limited capacity. However, we do want to note that once the theme parks do reopen, they can only host California residents only — no out-of-state Guests are allowed in this first phase of the theme park reopening.

Though at this time we do not have an exact reopening date or reopening guidelines for Disneyland Park or Disney California Adventure, Walt Disney Company’s CEO, Bob Chapek, confirmed that he hopes to have both theme parks at Disneyland Resort ready to reopen by late April.

And in the meantime, if you are looking to get some sort of Disneyland experience, be sure to visit the Downtown Disney District, and by extension portions of Buena Vista Street in Disney California Adventure, as they are currently open to Guests for select outdoor dining and shopping (though Buena Vista Street will close and reopen as part of A Touch of Disney). And as mentioned earlier, in just a few days, Disney California Adventure will be opening up more of its theme park as they will host A Touch of Disney.

What do you think these social distancing markers at Disney California Adventure are for? Let us know in the comments below.

If you want to visit one of the many Disney Parks around the world on your next family vacation, but need help planning, then don’t hesitate to get in touch with our friends over at Academy Travel. The trustworthy travel agents will be there with you every step of the way when navigating your magical vacation. Get started with a free quote today!

Comments Off on Social Distancing Markers Installed Outside DCA Ride