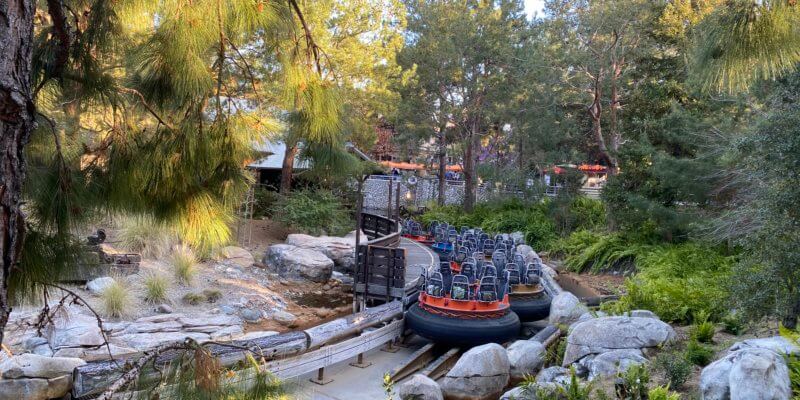 While we were visiting Disneyland Resort for the opening day of A Touch of Disney, the limited-time ticketed event at Disney California Adventure Park, we noticed something peculiar going on with an attraction. Grizzly River Run was completely drained of water!

If you take a look at the images below, you will see that the river at Grizzly Peak is still drained of water during this extended Disney Park closure, and it hasn’t yet been refilled.

Considering Disneyland and Disney California Adventure have been closed for over a year and will not reopen their attractions until late next month, it is no surprise that the theme park’s rapids ride is still drained of water. However, when the theme park is operating as normal, this isn’t exactly a common sight — unless, of course, this Disney California Adventure attraction is under a scheduled refurbishment. This refurbishment typically occurs in January and February annually, just as it did last year. So right now, we suspect that this could be one of the many rides at Disneyland Resort that Cast Members are working on getting in tip-top shape so that Guests can ride it once again.

Still, it’s certainly interesting to see an attraction like this without any water, especially since we love seeing and hearing the river flowing through Grizzly Peak on sunny days at the Happiest Place on Earth.

Located in Grizzly Peak near Soarin’ Over California (or Soarin’ Around the World, depending on the time of year) and the Redwood Creek Challenge Trail, Grizzly River Run is often regarded as a must-do attraction on hot California days. Although the river rapids ride doesn’t tend to boast long wait times year-round, it is highly popular in the summer and during Southern California heat waves. Plus, it is the only water-based attraction in Disney California Adventure Park, making it a unique experience at the Disneyland Resort and a great way to cool off when needed.

Although Grizzly River Run is completely drained of water right now, that doesn’t mean Guests won’t get to experience rafting through the rapids once the theme parks of the Disneyland Resort reopen. We look forward to experiencing this ride hopefully sooner rather than later, and we’ll update Inside the Magic when we have more information on specific attraction operations as those details are released.

Additionally, several rooms at Disney’s Grand Californian Hotel & Spa offer views of Disney California Adventure Park, many of which overlook Grizzly River Rapids. So, we hope that the river is filled back up with water by the time the Grand Californian reopens, since Guests will be able to stay there beginning April 29, just one day before the theme parks reopen to the public.

If you want to read more about Grizzly River Run, we’ve included the full attraction description below, courtesy of the Disneyland website:

Strap into a circular 8-person raft and drift along a lazy river, passing the rusty remnants of an old mining company. Rumble up to the top of the mountain and brace yourself for an exhilarating descent down Grizzly River on a wild river ride. Bob and spin through the raging current. Careen through a craggy mountain cavern. Plummet down a perilous bedrock slope. Ease your way back to base camp, but not before navigating waters overrun with gushing geysers.

The majestic grizzly bear is the symbol of California—land of towering peaks, giant trees and thundering waterfalls.As you make your way towards the debarkation point, look for the distinctive bear profile at the top of the mountain. According to early folklore, Grizzly Peak was once a giant bear named Oo-soo’-ma-te, whom A-ha-le the Coyote transformed into stone to watch over and protect the mountain. Listen closely and you may hear the great bear’s spirit roaring along the river!

Lockers Available
Lockers are located next to the 20-foot tall grizzly bear statue that marks the entrance to Grizzly River Run. Please stow phones, cameras and any other items that might be damaged by water. Lockers are available at no charge for the first 2 hours.

Currently, A Touch of Disney is running from March 18 through April 19 as a separately ticketed event (which actually sold out the day tickets became available!). On April 30, Disneyland Park and Disney California Adventure Park will reopen — find all the details here.

Stay tuned to Inside the Magic for the latest information on all things Disney Parks!

Click here to book your next Disney trip with Academy Travel — especially if you want to be among the first Disney Parks fans to visit Disneyland and Disney California Adventure when they reopen at Disneyland Resort!