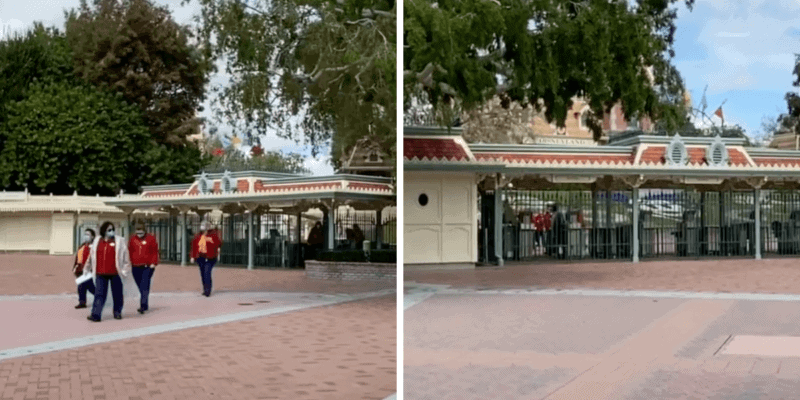 And so it begins — the preparations to reopen the Disneyland theme parks! Disney magic is right around the corner, and Disney announced recently that approximately 10,000 Cast Members will be brought back to work at Disneyland Resort, and now they have been spotted at Disneyland Park.

Well, positive news spread very quickly that last Friday, California Governor Gavin Newsom released a revised version of the Blueprint For a Safer Economy. With regard to the reopening guidelines of all California theme parks both large and small, the “Blueprint Refresh” states that a theme park can reopen as early as April 1st, as long as  the county in which that theme park is located is in the substantial red tier, the second tier of the four-tier reopening guidelines.

Disneyland President Ken Potrock followed up with a statement of encouragement to Disney Cast Members and fans that there is magic within reach. Orange County, where Disneyland Resort is located, is currently still in the widespread purple tier but is expected to reach the red tier very soon. There are hopes that vaccination sites like the one at the Toy Story parking lot at Disneyland will allow for them to open up the gates quickly.

Disney CEO Bob Chapek even stated that Disney is hopeful that Disneyland will be able to reopen as a theme park by late April — though only to California residents. One thing that won’t be reopening with Disneyland Park and Disney California Adventure is the highly anticipated Avengers Campus. The reopening date for this new land will come at a later time.

Disneyland Resort is operating Disney California Adventure beginning March 18 for one month for the ticketed event, A Touch of Disney. Fans will be able to get their hands on the Disneyland foods and experiences they have been craving since Disneyland began its temporary closure last March.

While the fans are waiting for the original Disney Park to welcome them back, Disney isn’t waiting to start the magical preparations. Let’s be honest — magic happens when the Cast Members onstage and backstage are putting together all the pixie dust.

And today, thanks to wonders_of_magic on Instagram, we can see that no one, but a bunch of Cast Members were spotted at Disneyland Park. It’s already expected that it will take some time to recall and train Cast Members in the new health and safety measures for the reopening, and we know that 10,000 employees will be called back to the Happiest Place on Earth for the theme parks to reopen this spring. A Touch of Disney already allowed Disneyland Resort to recall 1,000 Cast Members back to DCA for work.

Now Disney is recalling Cast Members for different stations and each attraction that they can. Some are still waiting for their magical moment to be recalled from furlough as a Disneyland Cast Member. Certainly, Cast Members who are being recalled for the reopening are happy to be back to work at The Happiest Place on Earth.

Take a look at the video below to see some Cast Members behind the Disneyland Park gates:

Disney has yet to make any more announcements on how these guidelines will be handled for the reopening, but we will continue to update as more news is announced.

Any Cast Members out there want to share their excitement for going back to work at Disneyland? Who’s excited to wave and interact with all the Cast Members when we’re able to visit Disneyland again? Share your thoughts in the comments!