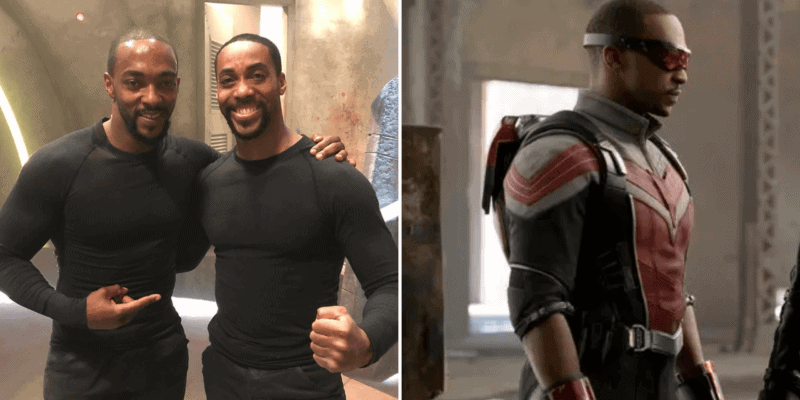 The Falcon and the Winter Soldier has been a source of joy over the past two weeks. However, a Marvel fan got an additional chuckle after pausing at the perfect moment to catch Anthony Mackie stunt double Aaron Toney.

It happened during episode two, as Mackie’s Falcon/Sam Wilson takes on the Flag Smashers. Check out the hilarious moment below.

Marvel Studios is usually great at hiding its stunt doubles through quick edits and rapid-fire shots. However, even Disney can’t beat the might of the TV pause button! Reddit user @LightsOut5774 shared the following picture to the r/MarvelStudios sub-Reddit. The user wrote, “I had to pause the show to answer a phone call. It turns out I paused on the exact frame that shows Anthony Mackie’s stunt double lol”.

As you can tell, that is not Anthony Mackie! That is, in fact, Aaron Toney, Mackie’s longtime stunt double.

So, they certainly have a long history together! It’s worth noting that Toney intends to retire following The Falcon and the Winter Soldier, so Mackie may have to work with another stunt double moving forward.

What was going on in this scene in The Falcon and the Winter Soldier?

The scene in question sees Bucky Barnes/Winter Soldier (Sebastian Stan) and Falcon/Sam Wilson (Anthony Mackie) going up against the Flag Smashers for the first time. The group is seeking to return the world to the way it was during the Blip, with no borders and no nations.

Things don’t go too well for the two Avengers, however, as they get thoroughly beaten by the group, who seemingly have super soldier powers. Additionally, they don’t receive a lot of useful help from John Walker (Wyatt Russell), the new Captain America. Although he’s certainly not a patch on Steve Rogers (played by Chris Evans).

It seems that the group will somehow be tied to Baron Zemo (Daniel Brühl), who our heroes are seemingly set to visit in episode three. We got a brief glimpse of the villain in his cell at the end of the second episode of the series.

Stay tuned to Inside the Magic for the latest updates on The Falcon and the Winter Soldier.

The Falcon and the Winter Soldier is streaming exclusively on Disney+. It stars Anthony Mackie, Sebastian Stan, Daniel Brühl, Emily VanCamp, and Wyatt Russell. It is created by Malcolm Spellman as well as the team at Marvel Studios led by Kevin Feige.

Related: The Russo Brothers confirm that Steve Rogers is no longer Captain America

But that’s not all. Toney has also worked as a stunt double for Djimon Hounsou in Guardians of the Galaxy (2014) and Chadwick Boseman in Captain America: Civil War (2016), Black Panther (2018) and Avengers: Endgame (2019) and Michael B. Jordan in Black Panther. Sadly, The Falcon and the Winter Soldier will be the stunt performer’s final role in the MCU, as he’s announced he’s retiring.

You can check out almost every Marvel Studios project on Disney+. From Captain Marvel to WandaVision, starring Elizabeth Olsen (as Wanda / Scarlet Witch), Paul Bettany (as Vision), and Kat Dennings (as Darcy Lewis). Be sure to keep an eye out for the new Black Widow movie, too, when it finally releases!

Did you catch the Anthony Mackie stunt double shot? Let us know in the comments below.