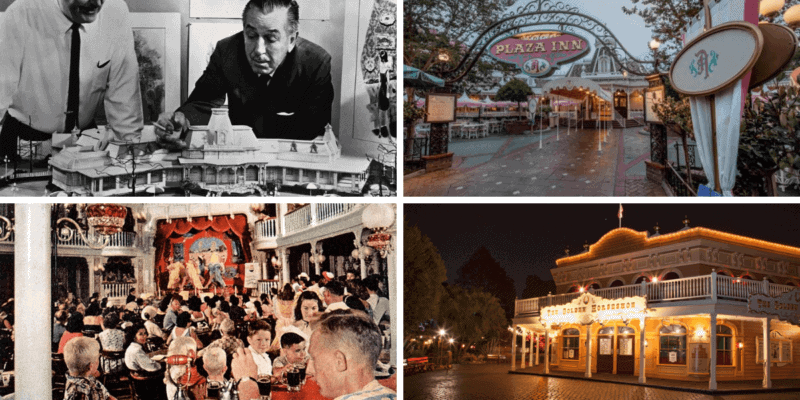 Thanks, Disney Parks Blog, for taking us on a look back at the history of Disneyland foods through the decades. Disneyland always comes with a full day of snacking on longtime favorites and seasonal goodies. Some of these past-enjoyed treats have remained the same, but some have changed dramatically over the years. Let’s look at how Guests have enjoyed foods across the decades at Disneyland Resort.

When Disneyland park opened in 1955, the food offerings ranged from hot dogs for the families eating on the go as they went from attraction to attraction, to sit down meals at Swift’s Red Wagon Inn (now Plaza Inn), where “fancy” meals were served in an elegant setting. The food focal point of Fantasyland was the Chicken of the Sea Pirate Ship and Restaurant. Tomorrowland’s quick service eateries were the Yacht Club and Space Bar. Main Street U.S.A.’s Carnation Café offered hot dogs, sandwiches and chili along with an array of ice cream treats representing each land. Ta Cup, a fried tortilla bowl filled with hamburger meat and cheese, was the signature item sold at Casa de Fritos in Frontierland (Rancho del Zocalo Restaurante occupies the space now). Menus at The Golden Horseshoe advertised “Tongue Teasing Foods and Drinks,” along with the famous stage show.

Now, hot dogs are much less popular at Disneyland, but what has taken over instead? Corn dogs! As you can see from the history provided by Disney Parks Blog, Plaza Inn was once the Red Wagon Inn, but there’s still a red wagon, the Little Red Wagon. Stationed in between the Plaza Inn and the Main Street Photo Supply Co., the Little Red Wagon is still serving up the best hand-dipped corn dogs in town. Sometimes you’ll catch the line wrapping around towards the front of the Plaza Inn, who’s now famous for their Fried Chicken and Pot Roast Dinners. If you’re still craving a good old fashioned hot dog, you can grab one across the way at The Refreshment Corner with a iced-cold soda or a super complicated hot dog from Walt Disney World.

The Blue Bayou Restaurant was ready when New Orleans Square was dedicated in 1966, however Pirates of the Caribbean was not. Walt delayed the opening of his anticipated themed restaurant saying, “It’s a bad show to look out at the bayou without pirate boats floating by.” Upstairs, the private and exclusive Club 33 was where Walt intended to host dignitaries and sponsors, including those that were being courted for what was then called simply Disney World. (His brother Roy added Walt’s first name to the Florida Theme Park after Walt passed away, insisting that there couldn’t be a Walt Disney World without Walt.) The cuisine throughout New Orleans Square was authentic –  Monte Cristos, beignets and Mint Juleps – and remain today. Adventureland featured the Tahitian Terrace along the banks of the Jungle River. Don DeFore’s Silver Banjo Barbecue, the only restaurant at Disneyland park to have a name on it other than Walt’s or one of his Disney characters, offered spareribs, chicken, plus fish and chips. Fantasia Ice Cream  – a blend of banana, pistachio and cherry – was introduced to Disneyland park!

Not much has changed about New Orleans Square. Many of us are still dreaming that one day we’ll get the opportunity to dine at the exclusive Club 33. Cafe Orleans is still serving Monte Cristos often paired with a side of their famous Pomme Frites. Guests can then head over to the French Market to pick up a paper bag full of sugar dusted Mickey-Shaped Beignets and a cold Mint Julep. Now, we even get to enjoy seasonally flavored Mickey-shaped Beignets!

DOLE became the sponsor for Walt Disney’s Enchanted Tiki Room, notably the only attraction at Disneyland park with Walt’s name on it. In the beginning, only fresh pineapple spears and pineapple juice were sold; DOLE Whips arrived the following decade. Originally planned to be a restaurant concept, the idea was abandoned when it was determined that the guests would be so “enchanted” with the birds above, they would linger and never leave. The dinner show became a theater experience with three performances an hour. Outside, the Tikis in the Garden of the Gods were carved by Disney Legend and Imagineer Rolly Crump using an ordinary plastic fork from the Walt Disney Studios commissary.

Dole Whips are still the craze and queues will usually wrap around the front and back of the Tiki Juice Bar. You’ve got your options now on where to enjoy your Dole Whip. On a summer day, many are still taking their Dole Whip into Walt Disney’s Enchanted Tiki Room to escape that Southern California  heat. Adjacent is the new Tropical Hideaway where you can treat yourself to Dole Whip Swirls, Bao Buns, and Sweet and Savory Lumpia, snacks that pair well with the tropical theme of your Dole Whip.

Churros and Disneyland park go together like Wanda and Vision. Intended for Videopolis in Tomorrowland, they were first tested near the exit of the Mark Twain Riverboat. Only 100 were made on that one fateful day in 1985. When they were wheeled through Frontierland, guests were following the cart, and needless to say – they sold out! Variations on flavors, colors, textures and dipping sauces were innovated more than a decade later; the churro remains a fan favorite and darling of social media. Big Thunder Barbecue opened at Big Thunder Ranch in 1986. Set outside, Guests were served beef or chicken from the chuck wagon. The fixings were delivered family-style to picnic tables. The beloved BBQ’s operation spanned nearly thirty years – with a few name changes – before finally closing to make room for a galaxy far, far away.

Churros are another snack that has remained timelessly delicious over the years — with numerous must-try seasonal flavors each year — but, still, nothing beats the original churro. Disneyland may have tested churros in one location before, but now there are Churro Carts in just about all the lands! Big Thunder Barbecue may not be there anymore, but you can still enjoy these western favorites at The Golden Horseshoe and barbecue at River Belle Terrance.

Believe it or not, it took almost forty years to bring a fully realized, chocolate-covered ice cream bar in the shape of Mickey Mouse to Disneyland park. There were several iterations over the years, with the vanilla bar first having oblong and oval shapes, and a version with only Mickey’s ears covered in chocolate, before technology finally caught up with the Mouse that started it all. The treat we know and love today, Nestlé’s Mickey’s Premium Ice Cream Bar, was introduced by Nestlé in 1992. This decade also brought us skewers across the path from Indiana Jones Adventure at Bengal Barbecue. Beef, chicken, veggie – but no snake!

Those loyal to Disneyland are still treating themselves to Mickey ice cream bars here and there, but the ice cream carts not the only spots you can get ice cream at Disneyland. There’s your classic 1950’s looking Gibson Girl Ice Cream Parlor at Disneyland Park and The Kitchen Sink dessert extravaganza at Clarabelle’s Hand-Scooped Ice Cream is a famous one to split with friends. The latest and greatest is Salt & Straw over in the Downtown Disney District, where handmade ice cream meets innovative flavors.

The 2000’s brought the opening of Disney California Adventure. Though it didn’t all happen in the 2000’s decade, the opening of Disney California Adventure is significant to the culinary history of the Disneyland Resort. It brought along Schmoozies with their amazing milkshakes, became the home of many festival marketplaces with tastes from around the world, and eventually, when Paradise Pier became Pixar Pier, the Jack-Jack Cookie Num Nums.

Star Wars: Galaxy’s Edge opened at Disneyland park in 2019 and included intergalactic foods from Batuu including Blue and Green Milk, (believed to be Luke Skywalker’s favorite), and podracer engine-roasted Ronto Wraps. State of the art culinary theming is also evident at Oga’s cantina and Chef Strono “Cookie” Tuggs Docking Bay 7 Food and Cargo. Back on earth, the Tropical Hideaway in Adventureland became the new home of solo artist Rosita, along with assorted baos, lumpia, and reimagined DOLE Whip.

Star Wars: Galaxy’s Edge created the newest Disneyland food debate. Are you team blue milk or green milk? This new land brought a whole different aspect to dining at Disneyland. Though Guests are used to the special ambience that Disneyland always brings to their dining, Star Wars: Galaxy’s Edge has become something fully immersive that not only takes Guests away from their troubles for a day, but literally transports them to another galaxy altogether!

The 2020 decade is just starting and it has quite literally turned the world upside down. Now, we just look forward to what is to coming next at Disneyland Resort. The upcoming opening of the Avengers Campus at Disney California Adventure is sure to offer something new and exciting for Disney foodies. Could this new land come with Marvel superhero food?

Which decade of Disneyland food is your favorite?

Comments Off on How Disneyland Foods Have Changed Through The Decades