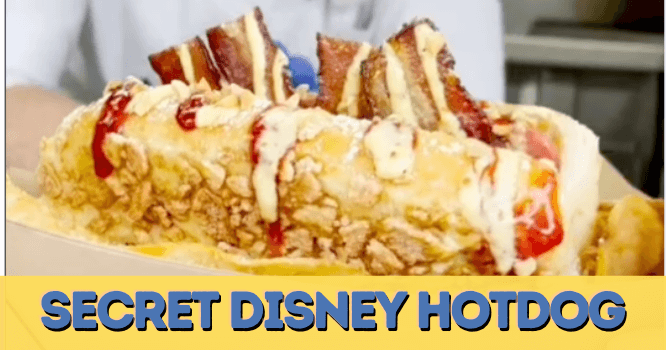 Ready for something your tastebuds will never forget? The over-the-top secret menu item debuting at Disney Springs was announced via a secret TikTok video by the official Disney Parks (@DisneyParks) channel — and it is simply too much.

Only by visiting the Hot Diggity Dogs food truck at Disney Springs and saying the magic words (no seriously, there is a secret phrase) can you order the secret Disney hot dog that won’t debut to the Disney Park public for two more weeks.

Disney hot dog fans are used to sticking to the perennial favorite, Casey’s Corner in Magic Kingdom theme park, but ever since our preferred corn dog nuggets made an appearance in Frontierland, we’ve been worried about the timely return of Casey’s Hot Dogs. With a food truck specializing in hot dogs ready to serve us at Disney Springs in Walt Disney World Resort, this reporter is open to some new ideas.

Let’s take a look below to see if our taste buds start tingling!

WAIT, WE TAKE IT BACK!

This new spicy PB&J meets hot dog with added crunchies may be too much — even for the most adventurous foodie. “The King Dog” as coined by Disney Parks, is an all-beef butterflied hot dog sitting in a French-Toast battered and cereal dipped hot dog bun (okay, that part sounds like a tasty treat) piped with spicy peanut butter (okay…). Then, the hot dog is topped with banana honey mustard (Ummm, does that match?), chipotle-berry preserves, and stuffed with billionaire’s bacon.

Did you get all that? The flavor profile is insanely complicated with savory, spicy, sweet, and tailgating flavors. One can’t forget the dusting of powdered sugar because this entree doesn’t have enough going on… right? Here’s a look at the finished product as it’s being dressed by a Cast Member:

Watching the video on TikTok is like viewing an Epic Meal Time cooking show — but in real life. The greatest part of this secret Disney hot dog (for now, until it’s released later this year) is how you’re supposed to order it. Belly up to the food truck and sing “Hot Dog, Hot Dog, Hot Diggity Dog!” and the crew will start prepping your menu item.

If you do order this secret Disney hot dog, make sure to film yourself ordering, eating, and rating this new delicacy. It’s bound to be more than you ever wanted in a hot dog, but we are curious… so you do the tastin’ and report back to us!

Would you try this sweet and savory (and totally complicated) secret Disney hot dog? Leave us a comment below!