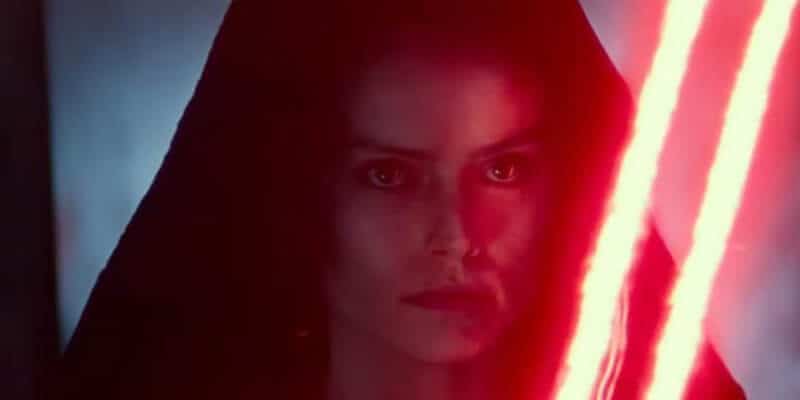 Beginning with her initial hesitation to leave Jakku in The Force Awakens, much of Rey’s story arc throughout the sequel trilogy involved searching for her parents.

Ultimately, she discovered that her alarming connection to Kylo Ren/Ben Solo (Adam Driver) and strong Force sensitivity were due to the fact that her father was, in fact, a failed clone of Emperor Palpatine (Ian McDiarmid).

…the special look included Rey dressed in dark robes and wielding a double-bladed red lightsaber. Although she doesn’t fall to the dark side in The Rise of Skywalker, she comes close during a climactic battle with Palpatine. Instead, she vanquishes him and the Sith, bringing balance back to the Force.

The image features Rey dressed in a black robe and cape, seemingly emerging from a post-apocalyptic landscape. In the second image, viewers can see the rather crazed look on the Star Wars heroine’s face as she apparently fully descends to the dark side, a la Anakin Skywalker becoming Darth Vader.

At this time, it is unknown if Rey — who took the name “Rey Skywalker” on Tatooine at the end of Episode IX — will ever return the Star Wars universe. Actress Ridley, much like her co-stars John Boyega (ex-stromtrooper Finn) and Oscar Isaac (Resistance pilot Poe Dameron), has expressed that she was happy with Rey’s ending and feels no need to continue her story, but Star Wars actors have certainly changed their minds about returning to the franchise before.

As a matter of fact, Star Wars icon Mark Hamill recently reprised his role as Luke Skywalker — albeit as a CGI de-aged version of the Jedi Knight — in Jon Favreau and Dave Filoni’s The Mandalorian Season 2 finale. Hamill had previously stated he didn’t expect to play Skywalker again following the sequels.

What do you think about this “Dark Rey” concept art? Would you like to see Rey, Finn, and Poe Dameron come back to Star Wars in some way?