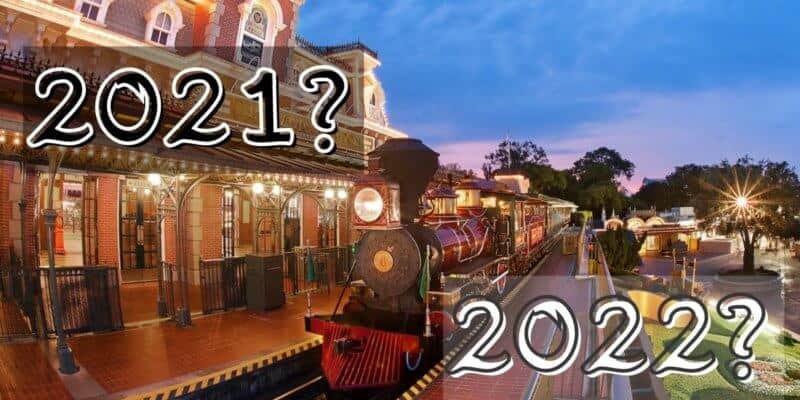 The famous Walt Disney World Railroad, which gives Guests the grand circle tour of Magic Kingdom, has been closed ever since December 2018 so Disney World could begin construction and make way for the upcoming TRON attraction in Tomorrowland.

It is more than likely once the calendar extends to further dates, the refurbishment/closure of the Walt Disney World Railroad will also be extended.

As we mentioned before, the Walt Disney World Railroad has been closed to Guests ever since December 2018 so Disney could begin construction on the upcoming TRON Lightcycle / Run attraction, located in Tomorrowland. If Disney World never closed the Railroad, not only would it get in the way of construction workers working on the TRON attraction, but it would also allow Guests to get behind-the-scenes looks at the upcoming attraction. Therefore, the Railroad will more than likely stay closed until TRON Lightcycle / Run makes its debut.

At this time, Disney has not yet announced an opening date for TRON. Initially, it was expected to open in time for Disney World’s 50th anniversary, which takes place in October 2021. However, with construction coming to a halt due to the pandemic, workers fell behind and now we are unsure when this attraction will open.

Disney did confirm that the TRON project has “picked back up in stages”, and so they are continuously working on the attraction to get it ready for its big opening day, however, again, Disney has not yet announced when they plan to debut the highly anticipated attraction. In fact, despite construction continuing on the project, when Disney mentioned which projects are “priority” back in September, TRON Lightcycle / Run was not mentioned. So, it could still be slated for a 2021 opening, but it also could have easily gotten pushed back to 2022, given the impacts that the pandemic has had on construction projects at Disney Parks.

It is more than likely we won’t see the Walt Disney World Railroad reopen until TRON debuts due to the fact that it really will get in the way of construction. Inside the Magic will continue to update you as we get information regarding both of these attractions.

You can take a ride on the Walt Disney World Railroad just before it closed in December 2018 thanks to our POV ride through here: