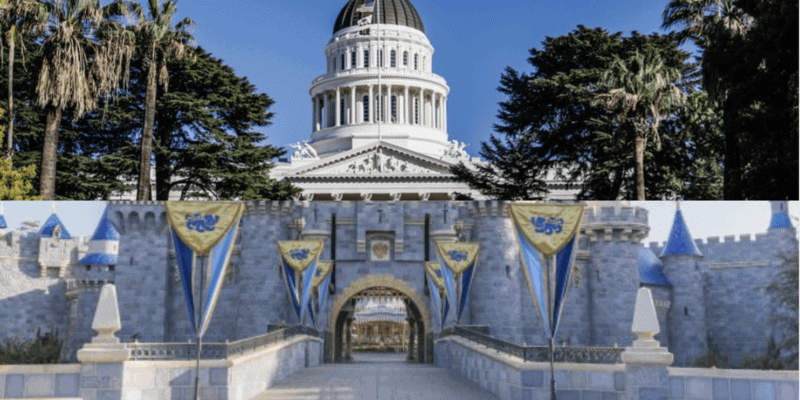 Similar to the California Attractions and Parks Association and many theme park executives, including Disneyland Resort President Ken Potrock, the mayors asserted that the existing framework is effectively ruining the economy in cities that rely on theme park tourism as a major source of both jobs and municipal income.

When ITM exclusively spoke with a city of Anaheim official, we were told that the city has been devastated by the lengthy Disneyland Resort closure and is down 25 million visitors as a direct result. This not only impacts Disney as a corporation, of course, but the individual Cast Members, small business owners, and others who participate in the local Anaheim — and overarching southern California — economy on a daily basis.

Here, we consider whether or not it would be possible for the California State Assembly and State Senate to step in and reopen theme parks, effectively overriding Governor Newsom’s guidelines.

Numerous California state legislators have already asked Governor Newsom to reopen theme parks. First, there was a letter sent by Assemblywoman Sharon Quirk-Silva and others and then, more recently, legislators who toured Disneyland asked the Governor to reopen the Disney Resort.

Quirk-Silva Tweeted this when the letter was sent:

I, along with my colleagues, request that @CAgovernor consider immediate reopening of California’s theme parks. Our theme park industry needs clear guidance to ensure the safety & health of their employees & guests. It’s time to reopen theme parks, safely and responsibly! #reopen

I, along with my colleagues, request that @CAgovernor consider immediate reopening of California’s theme parks. Our theme park industry needs clear guidance to ensure the safety & health of their employees & guests. It’s time to reopen theme parks, safely and responsibly! #reopen pic.twitter.com/245XeOi4cp

This shows that members of the California State Assembly are actively engaged in working hard to reopen theme parks in the state.

Since tens of thousands of workers in the state are employed by these currently closed amusement parks, their constituents may not look fondly on Assemblymen and Assemblywomen who don’t fight for California theme parks’ prompt reopening.

Could the CA state legislature battle the Governor?

The short answer is, in theory, yes. As many Americans recall from elementary school, in the United States, both federal and state governments have checks and balances that are designed to prevent any one branch or office — in this case, the California gubernatorial office — from having too much influence.

The state legislature adjourned on August 31 this year. Since they are not currently in-session, no bills are being actively introduced at this time. A PDF document outlining the California Assembly’s legal procedures provides these details about new bills:

The legislative process begins with the introduction of bills. To introduce a bill, the Member instructs the Legislative Counsel to draft the measure and assign it a request number (RN). This draft is then put “across the Desk,” meaning that the Member’s staff delivers the measure to the Assembly Chamber, where it is given a bill number by the Chief Clerk. The clerk then sends the bill to be printed. Pursuant to the rules and the Constitution, bills must be in print for 30 days before any action or votes can be taken (this provision can be waived by 60 votes pursuant to Art. IV, Sec. 8(a) and J.R. 55). The Budget Bill is exempt from the waiting period. Legislative deadlines govern virtually the entire process, including bill introductions, committee meetings, joint recesses, and bill passage from one House to the other. Most deadlines are established by Joint Rules 51 & 61, and can only be waived by a super-majority vote (i.e., 54 votes). A bill may be introduced beyond the established deadline, subject to approval by the Speaker (J.R. 54(a))

There are, even from this brief excerpt, many steps that have to be taken in order for a bill — such as a proposal to immediately reopen theme parks like Disneyland and Disney California Adventure or to somehow alter the Blueprint For a Safer Economy — to be presented in front of the Assembly.

It is worth noting that in certain cases, there is the option for the Assembly to vote to have a bill considered on the day it is introduced.

Related: OpEd: It’s Time for Disneyland to File a Lawsuit to Reopen

The California State Assemby’s 2020 legislative calendar can be viewed online and gives a better understanding of when any Assembly bill must be introduced in order to be considered.

What does the law say?

In a recent Reason.com article, attorney Luke Wake of the Pacific Legal Foundation (PLF) spoke about

…the state’s [California’s] Emergency Services Act, which enables the governor to declare a state of emergency, and gives him sweeping powers to craft regulations and direct state agencies’ actions when responding to an emergency.

While this law consolidates executive power in the hands of the governor, argues Wake, it doesn’t create new executive powers that haven’t already been approved by the state legislature.

“The Emergency Services Act allows the Governor to coordinate all aspects of the executive branch of the state and to exercise all powers already granted to any executive agency of the state,” reads the lawsuit. “It does not grant the Governor the authority to take actions not otherwise authorized by the California Constitution or by statute.”

Essentially, some — including certain lawyers like Mr. Wake — are questioning whether or not Governor Newsom has the legal right to enact all of the coronavirus restrictions he has on businesses of all sizes, from small local establishments to large theme park corporations.

Is the Assembly taking action likely to happen?

Currently, it is clear that many legislators are on the side of theme park executives, CAPA, and the Orange County Health Agency. It would not be surprising to see the theme park reopening situation ultimately wind-up on the CA Assembly floor if Disneyland Resort, Universal Studios Hollywood, and other major theme park properties have not reopened by the time Assembly members and state Senators reconvene. Only time will tell if this will be the case.

What do you think? Should the California State Legislature step in to reopen theme parks like Disneyland immediately?