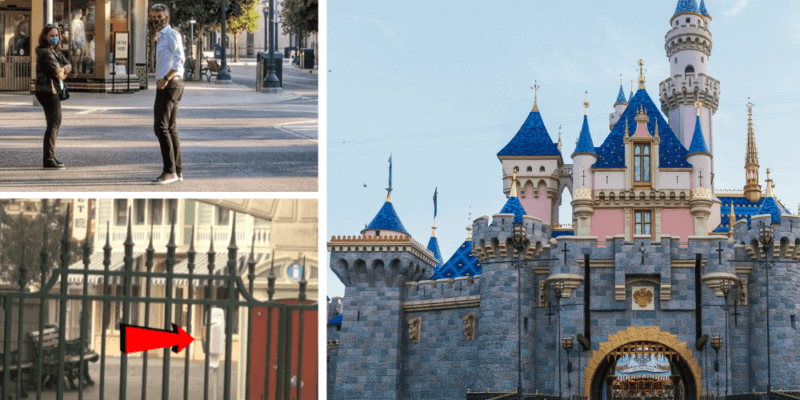 In the past few weeks, the energy of the Disneyland Resort seems to have wholly changed. Guests visiting Downtown Disney who make their way to the Esplanade have noticed new social distancing markers and barriers added to the entrances of both Disneyland Park and Disney California Adventure Park. In the wake of this new buzz, let’s see what steps Disneyland is retaking to reopen.

It has been a turbulent six months since the temporary closure of both Disneyland and Disney California Adventure in mid-March 2020. What everyone presumed would be a “two-week” closure turned into months of waiting for any news regarding the California theme parks reopening. However, recent activity at the Disneyland Resort appears to suggest that Disney is ready for their parks to reopen, but are waiting for guidelines from Governor Newsom.

Cast Members have been spotted at the entrances of both park entrances with new plexiglass barriers and scanning in their passes to test turnstiles. These new wrap-around plexiglass barriers suggest that Disney is prepping for crowds to return, but it all depends on a reopening date approved by the governor.

A few weeks ago, these plexiglass barriers were a single, flat piece in front of the turnstiles, rather than a full wrap-around design. Cast Members and fans alike are eager to return to the Happiest Place on Earth and are doing everything they can to make sure it happens this year.

Disney california adventure park today workers were testing the entrance by scanning their passes. New whistling noise could be heard from the machine instead of the normal buzz. plexi glass was being installed. In the disneyland park construction on the emporium has begun. from disneyparks

The glimpse into the near future of what the parks are going to look like. I think a common theme we will see at the stores is similar to world of disney format where you only enter one way and exit one way. I’m all for these new additions and Disneyland is definitely making tons of strides to boost the health and safety measures of the park. ????? . . #disneyland #disenycaliforniaadventure #disney #disneylandcalifornia

Guests visiting the Disneyland Resort have recently spotted brand new social distancing markers placed at the entrance of Disneyland Park. These new additions of social distancing reminders are signs of Disney eager to reopen and to boost their safety and health measures for Cast Members and Guests alike.

A few days ago, these “Please Wait Here” markers placed every six feet were nonexistent. They were noticeable after the virtual presentation from Disney Parks urging California State officials to reopen Disneyland Resort.

These new markers may suggest Disney is ready to reopen at any given moment and they could be pushing closer and closer to striking a deal with California government officials on how and when they can reopen their theme parks.

The entire resort is buzzing with activity. Cast Members are being spotted throughout the entrances of the parks while testing is being done on fan-favorite attractions. New social distancing markers and signs seem to be added nearly every day.

California Governor Gavin Newsom recently toyed with the notion of reopening California theme parks soon, but in recent days this may be a possibility.

Last week, Disney Parks, Experiences, and Products Chairman Josh D’Amaro was spotted at the entrance of Disney California Adventure by popular YouTubers Adam The Woo and Best Life & Beyond.

The duo called the Disneyland Resort a “beehive of activity.” On several occasions over the past week or two, Josh D’Amaro and other Disney officials have been spotted at Downtown Disney and the Esplanade. It appears there was an official walkthrough, though we don’t know the reason, and the new signage suggests officials are inspecting the parks to assess safety measures and health guidelines.

Josh D’Amaro has become the people’s champion after actively campaigning for Disneyland Resort to reopen again. In the recent Disney Parks virtual presentation on operating the parks during a pandemic, D’Amaro ended his remarks with, “We’re ready, and more importantly, it’s time.”

Possible Filming Outside of Disneyland Gates

This just in: several Cast Members were spotted at the entrance of Disneyland Park and in the Esplanade filming some possible promotional video.

Appears to be some activity going on in front of Disneyland ? might be filming happening they even have a cast member at the turnstile

Instagram user @paulsthemeparkadventures and @themeparktagalong spotted this filming crew and actors entering Disneyland and Disney California Adventure parks with the gates being wide open! Cast Members and possibly actors are sporting Disney masks and Mickey ears with what appears a Cast Member at one of Disneyland’s turnstiles ready to scan them in.

Looks like they are filming a commercial!!!!! This is not a drill! Still no date but it feels like it’s getting a lot closer more than ever! #disneyland #disneycaliforniaadventure

This is exciting news as activity around the resort is only building up. With this filming, we could see more signs of a near reopening date announcement from the company, but no date has been officially confirmed yet.

In the past few days, attractions like Incredicoaster and Matterhorn have been spotted testing for maintenance and safety. The parks have been quiet in recent months, but this new activity suggests that Disney is waiting for California officials to offer a reopening date. The parks are running like normal but without guests.

YouTubers Fresh Baked spotted the fountains from the spectacular nighttime World of Color show being tested in broad daylight.

Unless some huge sprinkler broke in Disney California Adventure, Cast Members are bringing life back to attractions that haven’t been used for months.

Related: Everything Disneyland Cast Members Are Doing to Prepare For Reopening

The Pixar Pal-A-Round at Disney California Adventure and Matterhorn Mountain at Disneyland were inspected and tested within the past few weeks, as well.

On top of this, the Five & Dime streetcar was spotted a few blocks away from Disneyland Dr. just a few days ago. While it’s uncertain, it appears that the “streetmosphere” car was transported from an offsite storage location to Disney California Adventure to prep the vehicle for future usage.

Unless this is a prized collection car that’s not the Five & Dime car, it appears that Disney California Adventure is getting ready to welcome back guests with performers and live entertainment from a distance. Cast Members may be getting ready to place the car in socially distanced locations that allow performers to play their jazzy tunes still. Though we don’t yet know what offerings will be available when the parks reopen, this gives us some hope.

It’s unclear if the Five & Dime performers have been called back, but this is an excellent sign for Disney getting ready for reopening.

Cleaning up the Park

One of the foundations of Disneyland is keeping Walt’s park clean. In recent weeks and days, Cast Members have been spotted around both parks’ entrances and within the theme parks trimming trees around the Matterhorn Mountain and Finding Nemo Submarine Voyage.

YouTuber Adam The Woo, joined by showrunner Spencer from Best Life & Beyond, walked around the perimeter of Disneyland Resort to spot any new activity taking place within the gates of Disneyland and around the theme parks.

In his video, we can see the tram pathway from the Mickey & Friends and Pixar Pals parking structures converted into a walkway with benches, trash cans, and social distancing signs added along the road. In recent weeks, guests spotted the tramway littered with leaves, but this new image suggests that Disney has converted this road into a walkway.

While it’s still uncertain, it’s possible that Disneyland will follow Walt Disney World in not offering transportation from parking to parks via trams.

Along the same pathway, a police officer surveillance tower has been placed along the path. This strongly suggests the trams will not be running when Disneyland reopens, as these towers are seen at the Harbor Blvd. and Downtown Disney entrance of the Disneyland Resort.

In the picture, a blue sign stating that guests must have a park reservation to enter is placed right next to a trash can along the old tram pathway.

Taking all of this into consideration, it appears that Disneyland is ready for reopening. It looks as though Disney has gone above and beyond to ensure Cast Member and Guest safety upon returning to the Disneyland Resort, and all they’re waiting on is an official agreement from California government officials.

We’re eager to see what Disney does next to help the parks reopen and can’t wait for an official reopening date! Click here to book a trip to Disneyland as soon as possible.

What are your thoughts on all of the activities taking place around Disneyland? Let us know in the comments below!

Comments Off on Steps Disneyland is Taking to Reopen