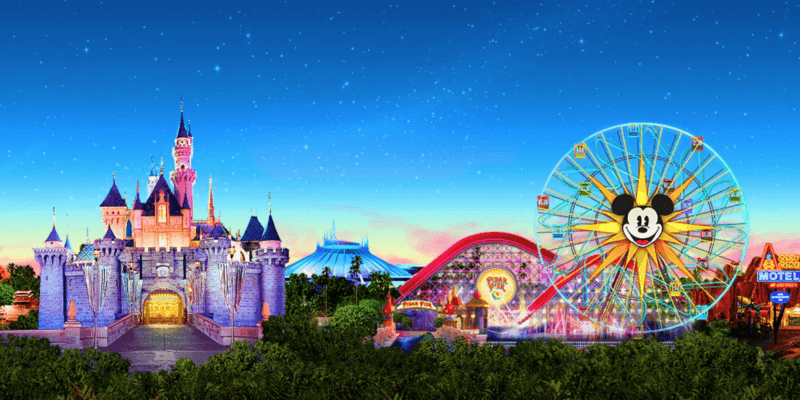 If you are like us, you probably cannot wait to see the gates of Disneyland reopen. After being closed for 6 months due to the pandemic, the idea of hearing music on Main Street, U.S.A. is a happy — but distant — memory.

Both Disneyland and Disney California Adventure are both awaiting the green light to reopen, and once they do there will be changes. Of course, with the new normal being a socially distanced, limited capacity theme park experience — things will have to change.

We can infer many changes from Walt Disney World, such as no nighttime fireworks or shows, no parades, and reduced park hours. Those are changes we are expecting, but we are starting to see a few smaller details of change that will effect your theme park experience.

Related: What to Expect at Disneyland After Disney World’s Reopening

Will trams be running?

On Twitter, @magicandwalnut showed us a few photos of the tramway at the Disneyland Resort, and it looks like the road is not usable at the current moment.

The @Disneyland Resort has all but confirmed parking trams will not be in service upon the theme parks’ reopening, with the placement of benches, trash cans and #Covid_19 safety signs all along the tram route. pic.twitter.com/k2mO5LKWtu

As you can imagine, placing benches and trashcans alongside a roadway will make is quite unusable when it comes to large tram vehicles. It seems like the feelings towards walking from the parking lot to the main entrance are mixed, some say “I think a lot of people will be Ubering if this is the case!” while others say, “I always walk, it’s no big deal.” Keep in mind that when the Walt Disney World theme parks opened in July, Disney made the announcement that the parking lot trams would not be operating. So many fans wouldn’t be surprised if this action was taken at Disneyland Resort, as well.

Perhaps this extra space will be used for socially distanced lines to enter the park, temperature checks, and extra security measures. The items on the roadway may even be removed prior to Disneyland opening and trams may run. All of this is speculative at this point, but it makes sense as to why Disney doesn’t want to have to have every guest sit on a tram for safety reasons. We will share official information as soon as Disney announces it.

Related: How Will the Disney Parks Change? Disneyland Shares Insight

Music on the walkway

Now if the speculation that trams will not be running is correct, this change may be directly linked to that. @magicandwalnut also shared this Twitter post:

The parking structure tram route at the @Disneyland Resort has just received a fun upgrade: An outdoor sound system playing background music on a loop. The music is festive and LOUD! pic.twitter.com/Fsv7qX8ufj

If you have a listen to the music, it is fun and upbeat — perfect for a long walk to the entrance of the park. The music is set to fit in with the Downtown Disney soundtrack and it also is the first time in 20 years that music is being played along this walk way. If we are going to walk from the Mickey & Friends and Pixar Pals parking structures, we might as well do it to Disney area music right?

Time will tell as to what else we see at Disneyland in terms of theme park changes. We can expect crowds will want into the park from Downtown Disney’s consistently hitting capacity on weekends, but the magic will always still be there.

Will you be headed to Disneyland once it reopens? Let us know!