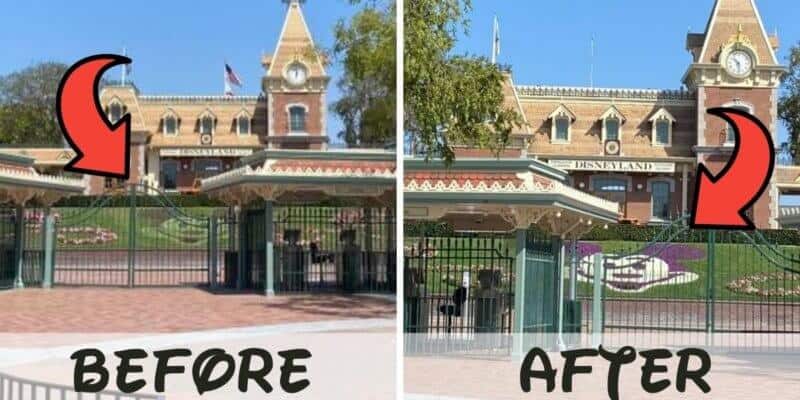 Today, Inside the Magic was visiting Downtown Disney when our Editor-in-Chief noticed that the floral Mickey at the Main Street Train Station at the Disneyland entrance has been spruced up!

This could possibly be just so it looks nice to Guests who are passing by, but this could also be another sign Disney is gearing up to reopen its California theme parks!

Check out a before and after shot below.

Now please keep in mind that Disneyland has not yet announced any official reopening dates or plans, but Inside the Magic has been reporting on some signs that the company is thinking about their next move. In fact, Disneyland has already stated that they have been ready to reopen since July, but they are waiting for the Governor’s approval to move forward. Senior Vice President of Walt Disney World Resort Jim MacPhee shared in a press conference, “Disneyland has been ready to roll since July, awaiting guidance from the state Governor on what the reopening protocols would be.”

Another good sign pointing towards reopening Disneyland soon is the fact that work has continued on the Emporium, which you can see in the photos taken by our staff below.

One of the most exciting things Inside the Magic recently reported on regarding a possible Disneyland reopening announcement is the fact that Josh D’Amaro was recently spotted inside the park!

Overall, it’s safe to say that Disneyland is prepping for its reopening, whenever that may be. Cast Members have been spotted beginning to fill the entry way, World Of Color is possibly testing, grooming and maintenance is being done throughout the parks, rides are running and being tested, and social distancing signs and plexiglass have all been installed.

However, until Disney officially announces their reopening plans, we will not know an exact date. Please stay tuned to Inside the Magic as we ill update you as soon as we know more information!

When do you think Disneyland will reopen? Let us know in the comments.