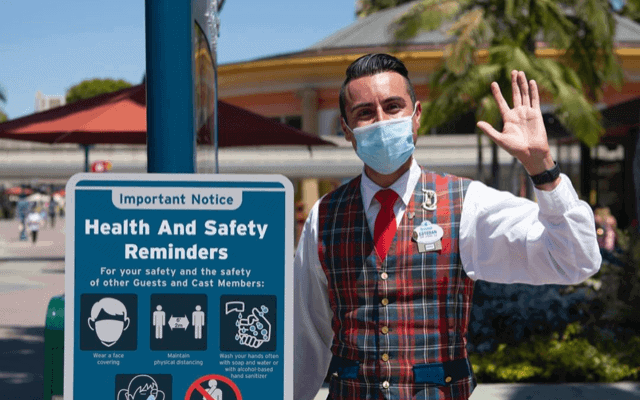 There’s been a lot of movement at the Disneyland Resort recently as Orange County moves into the next phase of reopening. The latest news is regarding Downtown Disney.

According to ABC7’s Tony Cabrera, Downtown Disney is currently making the proper adjustments to comply with new state and county guidelines. This will lead to more reopening of retail and possibly indoor dining.

Many are speculating what this could mean for the capacity restrictions set in place at stores like World of Disney, but Disney has not made any announcements regarding any changes there.

We’re told Downtown Disney and its retail/dining operators are making the appropriate adjustments to their locations to align w/ the new state and county guidelines.

More info on health & safety measures there can be found at https://t.co/tmL8Pr6yK7. @ABC7

What Does California’s Current Tier Mean for the Disneyland Resort?

Since the phased reopening of the Downtown Disney District beginning on July 9th, the question of when the resort can get back to being fully operational has been on everyone’s minds. However, since there has been more movement inside the parks with attractions testing and the installation of plexiglass at the turnstiles, we believe a reopening can’t be too far behind.

What Could Reopen In the Substantial Tier?

Not too long ago, we at ITM, reported on how the resort can reopen based on California’s new tier system. Disneyland’s Orange County was just placed in the Substantial Tier which could mean more movement towards a phased reopening of the theme park. Under this second tier, some indoor experiences and dining can reopen. As far as attractions go, the following could open under this tier: Great Moments with Mr. Lincoln, Main Street Cinema, The Enchanted Tiki Room, and Star Wars Launch Bay. The state is still working towards getting to the point of being fully operational and within state and county guidelines. California state governor had this to say about Disneyland’s eventual reopening:

“[Conversations] are ongoing, just as a reminder, for theme parks, amusement parks, and the like. There’s still many areas where we are open-ended in terms of our negotiation, making progress and advancing in the same space, getting closer to concluding when and how to safely reopen those sectors.”

Related: How Will Disneyland Reopen Under California’s New Tier Plan?

We continue to wait for more official information from Disneyland Resort regarding the continuation of its phased reopening.

What do you think about possible more openings for the Disneyland Resort under this current tier? Let us know in the comments!

Looking to book a Disneyland vacation for when the resort reopens? Let us help you plan!