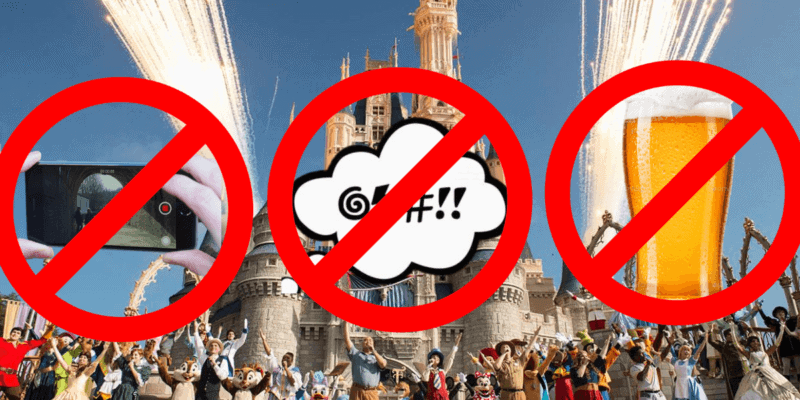 The question on many fans’ minds when we walk through those magical Disney gates is: “What to do at Disney today?” Well, in an exposé by Insider, former Cast Members reveal what not to do at Disney Parks, sharing some anecdotes from their time working for Disney.

Many of their frustrations stem from a lack of basic courtesy, though there are some interesting insights that only a Disney employee can provide.

So here is their advice for what you can do to make a Disney Cast Member‘s life more pleasant while still enjoying your own Disney experience.

Note: We have anonymously included the anecdotes and tips from Cast Members within this article, just as they were written on Insider. You can find each of their quotes in italicized text throughout this post.

Height restrictions are there to keep you safe

Cast Members become rightly frustrated when some parents try make their kids look tall enough to get on a specific attraction. If a roller coaster like Space Mountain or Expedition Everest has a height restriction, it’s for everyone’s safety.

The same principle applies for any other ride, even more tame experiences like Splash Mountain:

“This ranged from padding their shoes so they would be the right height for a ride, to lying about their age if a ride had an age requirement to ride solo … height requirements can mean the difference between a fun experience and a very serious injury.”

“Cast members just want to keep everyone safe – don’t lie to them about things like this.”

Getting a complimentary extra FastPass or an unexpected visit from Mickey adds that Disney magic to any trip. However, if you’re lucky enough to be selected for a “magical moment” once, it’s recommended that you don’t actively seek it out again.

“Cast members are trained to observe and listen to all the guests, and when they see an opportunity for a magical moment, [they] make it happen [for the guests] … It really ruins the magic when it’s forced or asked for.”

“Do not simply ask for extra FastPasses to be cheeky.”

Related: These are the things that annoy the Disney fan in all of us

Your Disney trip should be fun, but not at the expense of others

Cutting lines at a Disney theme park is poor form

For the Walt Disney World crowd, this one can be infuriating. Yes, the weather is pretty unpredictable and standing in the hot sun can be brutal. But whether you’re waiting for a Mickey meet and greet or to ride Spaceship Earth, nobody is exempt from waiting in line:

“Lines are there for a reason … It would also be amazing if all guests just respected the lines. It’s mainly teenagers that try to cut the long lines and it is definitely not allowed.”

Disney Parks are a place for families first and foremost. The Magic Kingdom can feel like it loses a little bit of magic every time someone drops an F- or S-bomb near a child. Equally, having a pint at the British pavilion at EPCOT is one thing, but downing several Mickey themed Martinis at a character meal is a whole other level:

“I wish guests didn’t walk around the park drunk [and] swear, complain, or talk badly about the characters … Everyone is there to have an amazing and magical time, and these things can ruin it.”

“Many guests have waited their whole life and dug into their savings to get to the Disney parks … My hope is that more people realize that and let every guest enjoy their visit.”

Bad behavior can give you a FastPass to consequences

Trash belongs in trash cans — your Disney vacation is no exception

Why ruin the beauty of Disney‘s Animal Kingdom or the Golden Age wonder of Disney‘s Hollywood Studios by littering the place with trash? Littering leads to extra work for Cast Members:

“I wish people would stop throwing trash in the themed queue areas … Disney puts so much thought, time, and effort into theming their queues to make them engaging for guests, and nothing ruins the magic like seeing a discarded soda cup or other pieces of trash out of place before a cast member has had time to remove it.”

Defacing rides and property is illegal, even at a Walt Disney World park

This should also go without saying, but don’t deface the parks. It just kills the Disney magic and the thematic immersion that each resort is so well-known for. More to the point, why would you want to ruin the Most Magical Place on Earth?

“Please do not climb or damage the attractions and set pieces. It was heartbreaking to see that as soon as Toy Story Land opened in Disney‘s Hollywood Studios that guests had already begun to deface the walls and sets in queue lines.”

Phones and tablets can be really annoying during shows

We’ve all been there. We’re about to settle into Disney Dreams or Happily Ever After, when all we can see is the person in front’s iPhone, right in our face. Fortunately, the selfie stick is a thing of the past at Disney resorts, but that doesn’t stop people from blocking the view of others with their devices.

Most of the fireworks shows have even been uploaded to Youtube for you to enjoy, so please think of other guests before you spend twenty minutes watching the show through your device.

“Please leave the iPad at home … You are there to experience the magic in person, not from behind your screen. I always get annoyed when watching a nighttime show like Happily Ever After, for example, but my view is blocked by a scene of screens.”

Camping at The Magic Kingdom for nighttime shows

Walt Disney World crowds are difficult to navigate, but during the Magic Kingdom light shows, they can be a nightmare. Be respectful of your fellow guests and Cast Members and leave appropriate space for people to get around.

“I skip watching the Magic Kingdom fireworks from the front of the castle (like everyone else)”.

This former Cast Member instead suggests watching from behind, near Fantasyland:

“The view is better – hardly any guests watch from the back – and the cast members come out and enjoy the show with you … They even interacted with my daughter last time and made her a princess during the show.”

Related: Why Do Fans Want To Visit A Disney Park Now?

Which Disney employee tip resonated with you? Will you be thinking of these the next time you head to EPCOT or the Magic Kingdom? Let us know in the comments below.