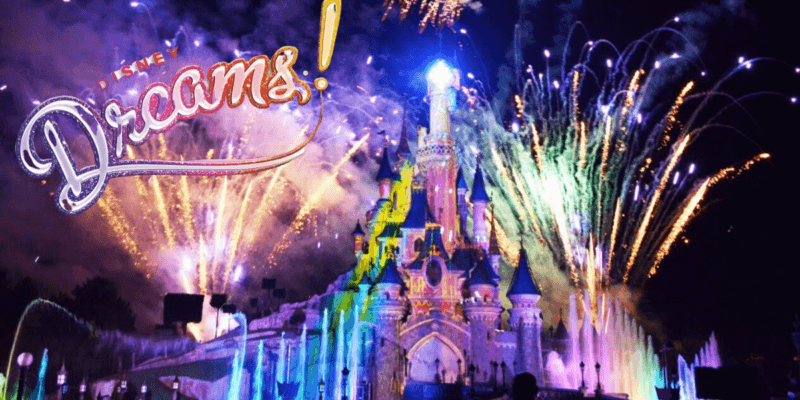 As every Disney Park (bar one) remains closed, Disney has allowed us to experience the magic of its iconic nighttime spectaculars from the comfort of our own castle.

Magic Kingdom‘s Happily Ever After Show and Disneyland Paris‘ Illuminations have let us relive our favorite castle projections park show while the theme parks are still sadly closed to the public.

This time, however, Disney has gone one step further by taking a trip down memory lane with Disneyland Paris‘ most iconic past show; Disney Dreams.

Introduced long after Euro Disney was renamed to Disneyland Paris, Disney Dreams ran for five years, between 2012 and 2017, and was created as part of the park’s 20th anniversary. The fact that we’re able to experience the magic of a nighttime spectacular designed specifically to tie into a theme park‘s 20th anniversary celebration is frankly awe-inspiring.

I loved watching this show at the time, and it’s a Disney dream come true to be able to watch it in such high quality, years later. Disneyland Paris Disney Dreams made just one other appearance, to celebrate Mickey’s 90th birthday in 2018, so this is a real treat.

Like many a Disneyland Paris attraction, ride and parade, Disney Dreams features classic Disney songs in both French and English. There is something so charming about hearing classic Disney park and movie tunes in the language of love; it’s a dream come true!

It appropriately features French Disney characters like Ratatouille‘s Remi and The Hunchback of Notre Dame‘s Quasimodo to pay homage to its amazing country. It also features fan-favorite songs like The Princess and the Frog‘s ‘Friends on the Other Side’ that don’t always get as much attention at other parks. What a unique show!

The Imagineers really outdid themselves with this Disneyland park show. Like its contemporaries, Disney Dreams uses a blend of firework, mist screens, and projection mapping technology to create a magical experience.

It’s amazing that Disneyland Paris managed to make the stunning Sleeping Beauty Castle look even more beautiful, but covering it in iconic Disney characters and movie scenes will do it!

Don’t miss out on finding the second star on the right and join Peter’s Shadow for an incredible show. If you ask me, this is Disneyland Paris‘ greatest nighttime spectacular. My dream would be to stay at the Disneyland Hotel, just past Disney village, and watch it in person one last time.

But I’ll make do with this awesome video for now. I’m not crying, you’re crying!

What do you think of Disneyland Paris Disney Dreams? Do you prefer it to Illuminations or Happily Ever After? Let us know in the comments below.