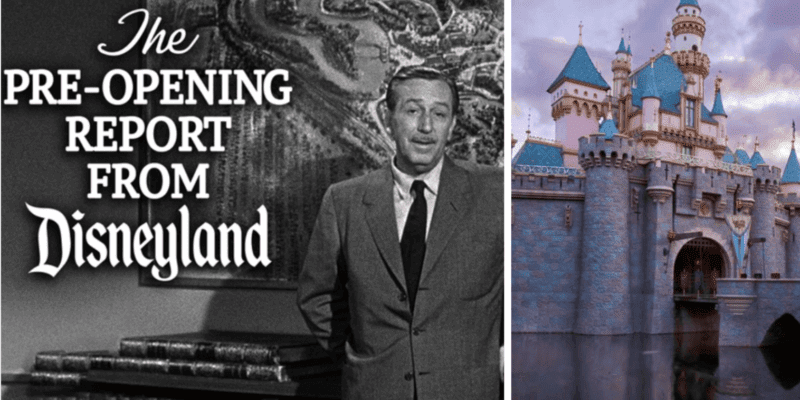 In 1955, when Disneyland opened in Anaheim, California, it was the first theme park of its kind. Most amusement parks of the day were geared solely toward children. Walt Disney, however, had envisioned  “a family park where parents and children could have fun- together.”

This brand new concept ultimately won over families from not only around the United States, but around the world, making Disneyland park (and the newer Disney California Adventure park) among the most popular theme parks on earth.

To celebrate Disneyland’s 65th Anniversary today, The Walt Disney Company has added the original 1955 Pre-Opening Report from Disneyland to Disney+.  This special feature was an episode of the Disneyland TV show and gave Walt Disney’s audience their first glimpse of his brand new world of “yesterday, tomorrow, and fantasy.”

The Disney Parks Blog shared the following description of The Pre-Opening Report From Disneyland:

Originally aired on July 13, 1955, Walt provides a final look at the many details necessary to ensure that the park will be ready. He begins by showing the audience a large map of the site, then introduces Winston Hibler, who provides a behind-the-scenes tour of how Studio technicians went about designing and building the unusual rides and shows about to open.

Hibler, known around the Walt Disney Studios lot simply as “Hib,” was a longtime Walt Disney Company employee, perhaps best remembered for narrating Walt Disney’s True-Life Adventures. He passed away in 1976 and was posthumously inducted as a Disney Legend in 1992.

Throughout the Pre-Opening Report From Disneyland, Hibler takes Guests on a virtual tour around the brand new theme park, still under construction at the time.

Viewers got to see the Autopia cars, which were truly innovative at the time. There was nothing similar at any other theme park in the 1950s.

The Disney at-home audience also got the chance to see progress on Sleeping Beauty Castle before Disneyland’s Grand Opening day. The castle remains a Disneyland icon and, thanks to renovations through the years, it still looks as amazing as ever for modern Disneyland Guests.

After you stream The Pre-Opening Report From Disneyland on Disney+ today, there are lots of other ways you can celebrate Disneyland Resort’s 65th birthday at home!

We encourage you to check out all of Disneyland coverage, from a round-up of activities you can do from the comfort of your living room to a tribute to Walt Disney’s beloved Disneyland railroad to a look at Disneyland Park is being commemorated today.

Are you looking forward seeing the original Disneyland Pre-Opening Report streaming? We think Walt would love the innovation of viewing a 65-year-old TV special on such a modern platform!