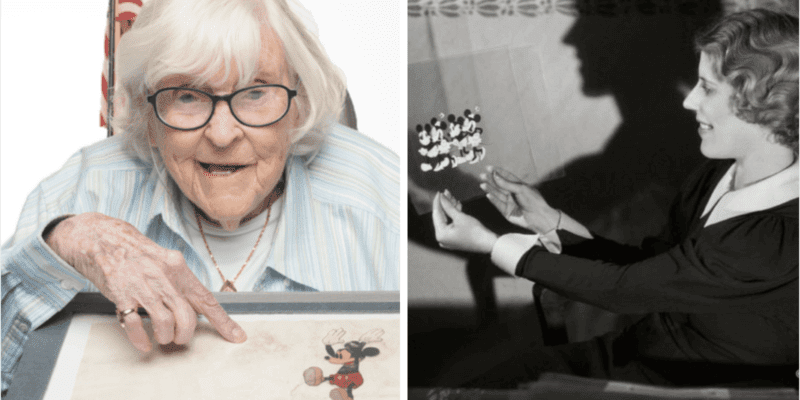 We love highlighting prominent members of the Disney community at Inside the Magic. This month, Disney Legend Ruthie Thompson will be celebrating her 110th birthday — what a milestone!

D23’s Jeffrey Epstein recently shared an article celebrating Thompson and all she has accomplished. You can read Epstein’s full story and interview with Thompson here.

Below you can find more information about Ruthie Thompson, how she got her start at the Disney company, and where she is today.

Ruthie Thompson knew the Disney brothers long before they became the household names they are today. Thompson grew up near Walt and Roy when they owned their house on Kingswell Avenue in Los Angeles and was one of several neighborhood kids who served as a live-action reference model for the Disney brothers’ Alice comedies.

As an adult, Thompson was offered a job in the Walt Disney Animation Studios Ink & Paint Department. She worked at Disney for 40 years, from 1935 until she retired in 1975. Thompson famously worked on nearly every animated Walt Disney feature film from Snow White and the Seven Dwarfs through The Rescuers, movies that are still household favorites to this day.

On July 22, 2020, Thompson will celebrate her 110th birthday! According to a D23 report on the upcoming celebration, the staff at the Motion Picture & Television Fund’s nursing home campus (where Thompson resides) has already “decorated the halls where she lives with her two favorite things: Disney and the Dodgers.” If you would like to donate to the MPTF’s fundraiser to dedicate a Post-Production Suite at MPTF’s Wassermann Campus to Ruthie, visit the official project website here.

Disney Executive Chairman Bob Iger also offered birthday wishes to Ruthie Thompson, calling her “an amazingly talented artist, a courageous pioneer, and a true Disney Legend [Thompson was inducted as a Disney Legend in 2000], and all of us at The Walt Disney Company salute you and wish you the very best. Keep smiling!”

Thompson herself spoke to D23, answering a few questions about her longevity and youthful spirit. She even offered some advice. In response to being asked if there’s any wisdom she’d like to share, Thompson said, “Have fun. Try to do as much as you can for yourself. Remember all the good things in life.” We couldn’t agree more!

Additionally, as she is a resident at MPTF, she shared some of the things she loves most about living there.

Thompson said, “Without MPTF, I would probably be living on the street somewhere. [Laughs] I want to do as much as I can myself. But when I can’t, they take care of me. I am grateful for so many things. I like the people here and I like to be with people I like. My friendships here aren’t picked, they just happen and they stay with me.”

Don’t forget to leave your happy birthday wishes in the comments as Ruthie Thompson turns 110!