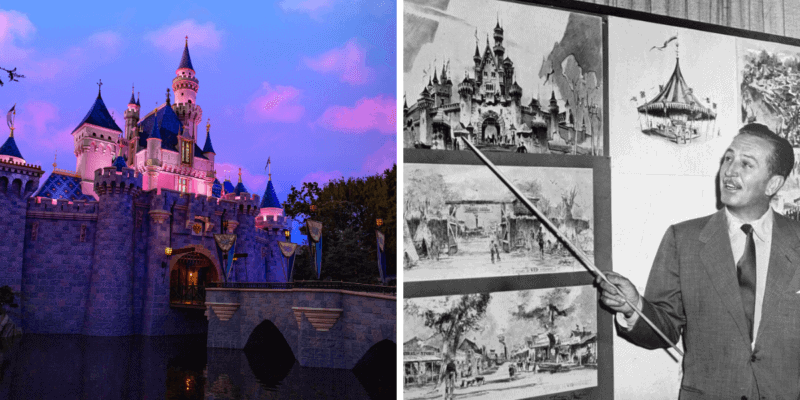 On this day, 65 years ago, a new form of entertainment came into the world. Successful movie producer and animation pioneer, Walt Disney, had long dreamt of a place where family members of all ages could have fun together. Drawing on his own vivid imagination, as well as those of his talented colleagues, Walt created a magical place that has been beloved since opening day.

A star-studded television special broadcasted the inaugural day to the world. 18 attractions were unveiled, many of which still thrill guests, including the Disneyland Railroad, Jungle Cruise and Fantasyland favorites King Arthur Carrousel, Peter Pan’s Flight and Mr. Toad’s Wild Ride.

Disneyland quickly generated a loyal following with more guests arriving enthusiastically in the days that followed, as well as carrying word of this magical place to others. Soon it was the de rigueur place to be seen by celebrities, dignitaries and even heads of state.

Over the years, the park has evolved, with the first major expansion in 1959, which included three new state-of-the-art attractions (including the world’s first tubular steel roller coaster). Other notable expansions included 1966 with New Orleans Square, Mickey’s Toontown in 1993, and most recently, the successful opening of Star Wars: Galaxy’s Edge in 2019. Today, the Disneyland Resort encompasses two theme parks, three resort hotels and the Downtown Disney District.

But beyond the attractions, the sparkling façade of Sleeping Beauty Castle and the iconic snacks of corn dogs, popcorn and churros, or perhaps embedded in them, many guests find a treasured nostalgia, and this love of Disneyland is handed down from generation to generation as a beloved gift.

To commemorate the occasion, “A Pre-Opening Report from Disneyland” is now available on Disney+. Originally aired on July 13, 1955, Walt provides a final look at the many details necessary to ensure that the park will be ready. He begins by showing the audience a large map of the site, then introduces Winston Hibler, who provides a behind-the-scenes tour of how Studio technicians went about designing and building the unusual rides and shows about to open.

With the eternal optimism that is the heart of Disneyland, we look forward to welcoming you back and celebrating this milestone together soon.

Today, Disneyland sits temporarily closed. Like the princess from whom her castle gets its namesake, then she lays in a deep peaceful slumber waiting to be awakened once again. But there is still so much celebration to be had either at home or in Downtown Disney District.

Related: Happy 65 Years, Disneyland! How to Celebrate at Home

Over the decades, Disneyland would become a part of a family of Disney Parks scattered throughout the world. Beginning with Magic Kingdom in 1971, followed in the 1980s by EPCOT, Tokyo Disneyland, and Disney’s Hollywood Studios came next. Disneyland Paris and Disney’s Animal Kingdom opened in the ’90s. Disney California Adventure, Tokyo DisneySea, and Walt Disney Studios joined at the beginning of the new millennium and were then joined by Hong Kong Disneyland and most recently Shanghai Disneyland.

But while the Disney Parks family has grown tremendously, there is only one original Disneyland. And just like we never forget that “it was all started by a mouse,” we will never forget that all of the parks, resorts, and amazing world-class attractions began with one man’s dream in the middle of California Orange Groves.

What’s your favorite Disneyland memory? Let us know in the comments!