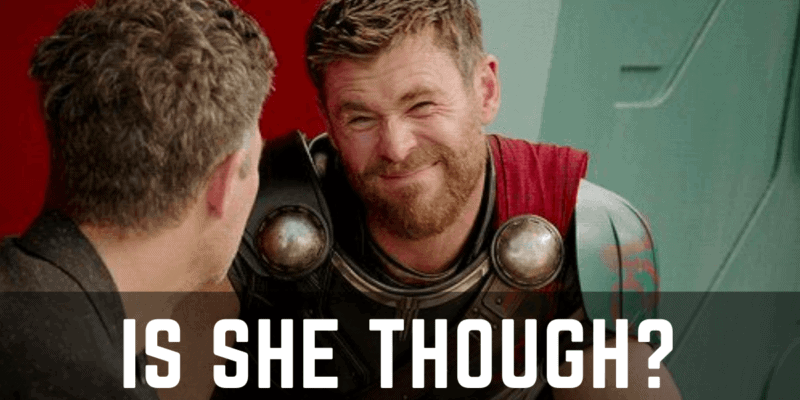 After starring in the ultra-successful Captain Marvel, Marvel Studios star Brie Larson may hop galaxy to the world of Star Wars if a new rumor is to be believed. But just how likely is a Brie Larson Star Wars movie?

We’ve already reported the rumor that she’d star as a live-action Ashoka Tano, as well as Larson’s response. It seems like every day a new MCU actor is rumored to make the jump to lightspeed and join Han Solo and crew, though Larson is a pretty consistent choice.

According to a report from Koi Moi, Larson will reportedly join a future Star Wars project alongside The Last Jedi director Rian Johnson and Taika Waititi.

Waititi is hugely in Disney‘s good books at the moment after making his Marvel Cinematic Universe debut with Thor: Ragnarok. As if that wasn’t enough, the actor-director superstar went on to direct and star in The Mandalorian tv series.

We know that he’s has been officially confirmed to helm a Star Wars franchise movie, so could this perhaps be that film?

It’s also worth noting that Larson confirmed she did indeed audition for a Star Wars movie, as well as a Hunger Games and Terminator movie in the past, something she confirmed on her own Youtube channel.

How likely is this Brie Larson rumor to be true?

We’d say 50/50. Larson is undeniably a hit in the world of Hollywood right now, with Disney – Marvel priming her for a confirmed Captain Marvel sequel, presumably coming in phase four or five of the Marvel Cinematic Universe.

It also would follow Lucasfilm‘s trend of casting high-profile actresses in lead roles, as we saw with star Felicity Jones in Rogue One and Emilia Clarke in Solo: A Star Wars Story.

Where the rumor falls down is that the film claims to be based on the Knights of the Old Republic, a hugely popular video game in the Star Wars fandom. While this isn’t impossible, the recent announcement of Disney‘s new High Republic series seems to discount this.

Regardless, this is all just hearsay at the moment. Whether Endgame star Brie Larson is really gearing up to star in a New Star Wars movie or not, nothing is confirmed until we hear it directly from Lucasfilm – Disney.

And let’s not also forget that this isn’t the first time Brie has been rumored to join Star Wars. We doubt it’ll be the last.

Did someone say Star Wars?! pic.twitter.com/e6vVm5wW2p

What do you think? Should MCU actress Brie Larson star in a new Star Wars film? Let us know in the comments below.