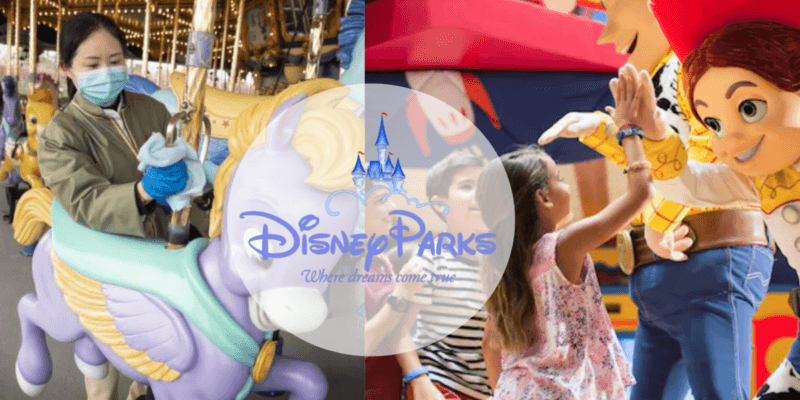 It’s no secret that wearing a mask to a Disney theme park is a vacation deal-breaker for some fans.

Just last week we gathered some of the most passionate responses to Shanghai Disney Resort’s new health and safety procedures, and almost all of the negative comments referred to wearing a mask as the chief point of contention;

‘Hope they use common sense in the reopening of WDW. Inside an attraction I don’t have a problem with a mask, outside in the heat; yeah not a good idea.’

‘No Disney for me until masks aren’t required.’

‘While I would love to see the parks open to the public, I will not return if face masks are required. And I’m ok with that. I will miss my home away from home, but I just can’t enjoy this experience with a face mask🙁 to all that will be going to the parks…have fun and stay safe’.

Will Disney fans have to wear a face mask at Disney parks and resorts in America?

CEO Bob Chapek has already said that the Walt Disney Company is considering face coverings in the form of a face mask as an essential health and safety measure when reopening the parks;

‘Along with social distancing, one of the things that we are likely going to require is masks for both the cast and the guest‘ Chapek told CNBC on May 11.

We’ve seen this policy rolled out in Shanghai Disneyland, where all guests are required to cover their faces with a mask. Cast members are also required to wear a face mask at all times, meaning your favorite Disney princess will have their face covered by a surgical mask during socially distanced meet and greets.

However, it is worth noting that this policy has allegedly already been relaxed at Shanghai Disney Resort as guests are now allowed to remove their mask when taking a photo at their favorite Disney landmark or attraction.

It’s a challenging time, but so far the policy seems to be working for Shanghai, where, we might add, the average temperature in May is between 62 and 76 degrees.

Will your child have to wear a mask at all times in a Disney park?

Kids can be tricky. Telling them that they must wear a mask when visiting the happiest place on earth may be a hard sell, but yes, it seems if Walt Disney World, for example, opens with the same guidelines as Disney Springs, kids over three years old will have to wear a mask to cover their small faces.

As a reminder, item six of Disney‘s press release explaining health and safety at Shanghai Disney Resort states that all guests must;

‘Wear an approved mask during the entire visit to the resort except when dining.’

Disney Springs’ policy on the Disney Parks Blog published on May 16 reads;

‘All guests 3 years of age and older, along with cast members and third-party operating-participant employees, will be required to wear an appropriate face covering while visiting Disney Springs. This is an important part of protecting both our guests and our cast. Please be sure you have an ample amount of face coverings for yourself and your party before you arrive, as you’ll need to wear them over your nose and mouth at all times (except when sitting at a dining table).‘

These policies apply to all cast members, beloved characters, and kids. Touching your face has been consistently advised against and experts around the world have suggested that cloth face masks may help to contain the spread. The medical community’s ongoing efforts have also included the implementation of social distancing to aid the prevention of respiratory threats via transportation of the airborne strain. Vulnerable communities such as those over 65 remain at greatest risk.

In Orlando, where the temperature can reach up to an average of 92 degrees in July and August, some Disney fans claim that a cloth face mask will in fact make it more difficult to breathe.

Disney has also not said how this new rule will be enforced, but as we know that Disney Springs has created a cast member team specifically to ensure that social distancing is respected, it’s not out of the question to assume that Disney staff will be there to make sure we’re all wearing an approved cloth mask whether they be Star Wars, Marvel, Disney patterned or otherwise.

Adherence to the rules may end up being the greatest challenge to Disney, as many of our followers have already expressed disdain at the idea of standing in hot waiting areas while wearing a stuffy cotton face mask.

However, some readers have seen the need and are in fact more worried that people won’t follow the rules and wear their mask;

‘I sure hope this doesn’t carry over into the States [Shanghai Disney Resort’s easing of mask guidelines]. If people don’t have to wear masks, they won’t and that’s too dangerous to risk going.’

Some fans have also pointed to the Disney character suits that cast members don during the hottest months. Their argument is that if a person can feasibly walk around in sweltering heat while dressed as heavy Marvel characters or fluffy Pixar characters, surely a guest and their child can manage wearing a piece of cloth across their face?

At the end of the day, guests’ needs are secondary to guests’ health and safety to the Walt Disney Company. Chapek and co, of course, want to get us all back in the Disney parks with our favorite characters to create more timeless stories. But they also need to ensure that the virus is contained which means if they say wear a mask, both you and your child will have to don a face mask if you want to visit Walt Disney World. However, as nothing has yet been announced, we’ll have to wait and see what both American Disney resorts decide to do when they finally reopen during this challenging time.

As for dealing with that Orlando heat, again, we’ll have to put our faith in The Walt Disney Company. It’s up to Disney to ensure that every adult, child, and Disney character performer on park grounds are as safe as they can be.

However, as we outlined in a recent article, if you are in the high-risk group of vulnerable communities, please consider the safety of both yourself and others before booking your visit; cloth face mask or no cloth face mask.

Do you think that Walt Disney World and Disneyland Resort should force guests to wear a face mask? Let us know in the comments below.