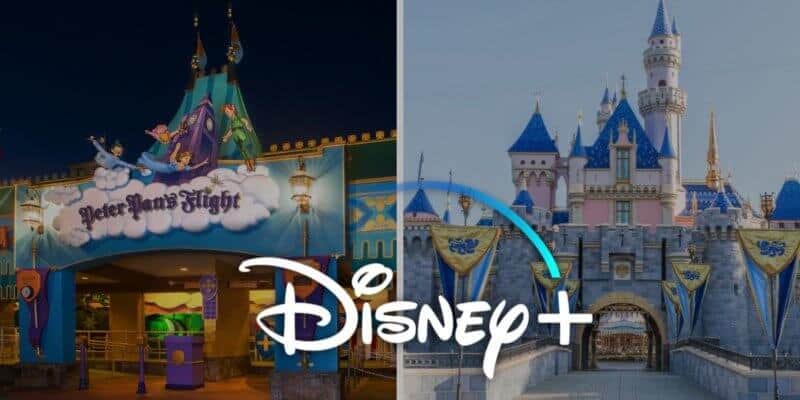 Are you missing the Disney Parks? I know I am — That is why my plans now include following along with this Disney Parks inspired watchlist.

This theme parks watchlist on Disney+ is guaranteed to bring the Disney feels right into your own living room. By checking out this Disney+ watchlist, you will feel as if you are right in Disneyland Park! So let’s begin our Disney Day, shall we?

Starting over in Tomorrowland, we will first dive under the ocean by “riding” the Finding Nemo Submarine Voyage — Therefore, the first film on our Disney+ watchlist is Finding Nemo. Next, let’s go high above the sky on Astro Orbitor and watch The Rocketeer. Lastly, we will blast off into space and explore Mars by watching Expedition Mars: Spirit & Opportunity.

The next land we will visit on our Disneyland Day is Fantasyland! This fairytale land is filled with imagination, magic, and pixie dust.

Next stop — the wilderness! Who loves Big Thunder Mountain? If so, let’s pop on Davy Crockett: King of the Wild Frontier and Pocahontas so we can pay tribute to the pioneers. And then, we will venture over to Tom Sawyer Island as we watch The Adventures of Huck Finn.

Want to visit Mickey Mouse? Then let’s head on over to Mickey’s Toontown!

This watchlist is filled with Disney classics to make you feel as if you are really inside Disneyland. Start with DuckTales, then watch A Goofy Movie, and finish by watching Who Framed Roger Rabbit?, and feel as if you are on the classic Toontown attraction.

Our next stop at Disneyland Park is Critter Country — Home to one of my favorite attractions, The Many Adventure of Winnie the Pooh.

Let’s watch some Disney films that remind us of our favorite critters — Zootopia, Winnie the Pooh and Bambi.

Next up, let’s embark on a swashbuckling adventure by watching Pirates of the Caribbean. (Personally, I recommend the first film but any will do!)

Of course, a visit to New Orleans Square wouldn’t be complete without The Princess and the Frog. (Added bonus — Create your own Mickey beignets by following this recipe!)

Which Disney+ watchlist will you begin your Disneyland Day with? Let us know in the comments.

Comments Off on Want To Take A Trip Around Disneyland? Follow This Parks Inspired Disney+ Watchlist