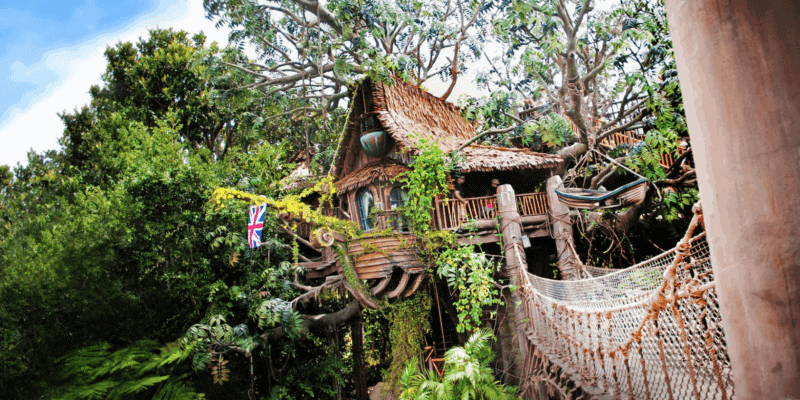 According to LA Times, Disneyland has reopened Tarzan’s Treehouse to Disneyland guests Monday morning after Disneyland had to close the popular Adventureland attraction on Sunday afternoon to guests after a wooden slat broke on a rope bridge, which was suspended three stories above the ground.

Thankfully it appears that no one was injured on Tarzan’s Treehouse, according to Disneyland officials, and a search was underway to identify the Disney guests involved in this incident. The Disneyland attraction remained closed for the remainder of the day on Sunday, officials said.

The wooden slat reportedly broke when a father was jumping on the bridge trying to show his children that the suspension bridge wouldn’t break. After the wooden slat broke, the Disneyland attraction was evacuated.

There have been photos posted to social media, which show the broken slot of wood on the suspension bridge on Tarzan’s Treehouse.

Allegedly, someone jumped so hard on the rope bridge in Tarzan’s Treehouse that it broke the bridge!!! ? https://t.co/61IZk3HFTB

If you look closely at the Tweet above, you can see that there is a wooden board which has been completely cracked all the way through. It also appears as if a net has been placed atop the broken board.

Tarzan’s Treehouse opened in 1999 to Disney guests as a walk-through attraction which showcases the story of Tarzan with treehouse rooms that closely resembles those from salvaged parts from a shipwreck, according to the Disneyland attraction’s backstory. Before the attraction was Tarzan’s Treehouse, it was known as Swiss Family Treehouse, which opened to Disney guests in 1962, and featured concrete roots, steel limbs and 300,000 leaves.

This is a developing news story and will continue to update on the situation as we get more information.