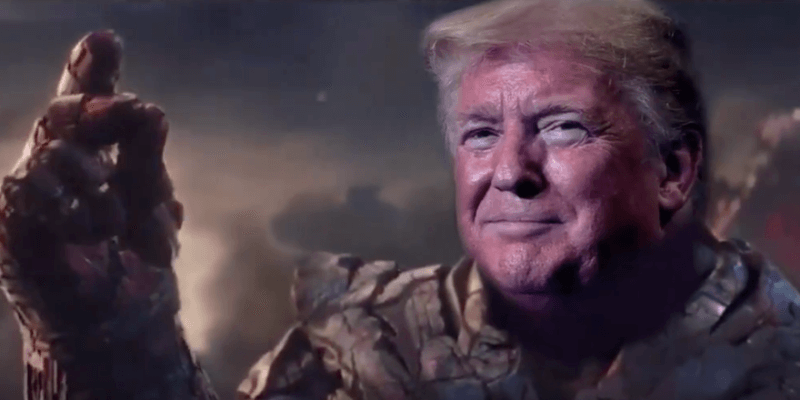 The Thanos creator is now speaking out about the President’s new campaign which compared him to the MCU villain. Jim Starlin, who introduced Thanos in the 1970s, called President Trump a “pompous fool” after seeing the campaign surface the Internet.

“After my initial feeling of being violated, seeing that pompous fool using my creation to stroke his infantile ego, it finally struck me that the leader of my country and the free world actually enjoys comparing himself to a mass murderer,” Starlin said.

He even told The Hollywood Reporter, “How sick is that? These are sad and strange times we are going through. Fortunately, all things, even national nightmares, eventually come to an end.”

Jim Starlin is known for his creation of the MCU villain as well as the Infinity trilogy in the early ’90s, which was a series of books that helped inspire both box office hits, Avengers: Infinity War and Avengers: Endgame.

On December 10, 2020, the House of Representatives introduced two articles of impeachment against President Donald J. Trump.

That’s right, the one and only Thanos.

One of Trump‘s official campaign accounts tweeted out a video of Thanos, who is played by Josh Brolin in Marvel’s record-breaking 2019 film, Avengers: Endgame and Avengers: Infinity War, with President Trump‘s head over Thanos’ face.

Of course, with any sort of political topic came a lot of conversation. Twitter blew up and users had a lot to say about this one, especially because President Trump compared himself to a villain who has killed millions.

There is also the fact that the new Presidential campaign Tweet actually used a clip of a scene from Avengers: Endgame where Thanos’ arrogance gets in the way and “blinds him to the point he didn’t realize he was getting beat”. This is the same scene where Tony Stark, played by Robert Downey Jr., actually took the Infinity Stones away from Thanos without him knowing. (You know, the clip where Stark saves the world).

In the Twitter campaign clip, Thanos/Trump performs the infamous snap as he dusts Nancy Pelosi (D-CA) away as well as other “high-ranking members of the president’s congressional opposition”.

House Democrats can push their sham impeachment all they want.

This leaves me wondering… What does Disney think about this?

Regardless, you can stream Avengers: Endgame on Disney+, Disney’s new streaming service, and you can look forward to other Marvel films and Disney+ series making their debut next year:

What do you think of the new Trump/Thanos campaign video? Let us know in the comments.