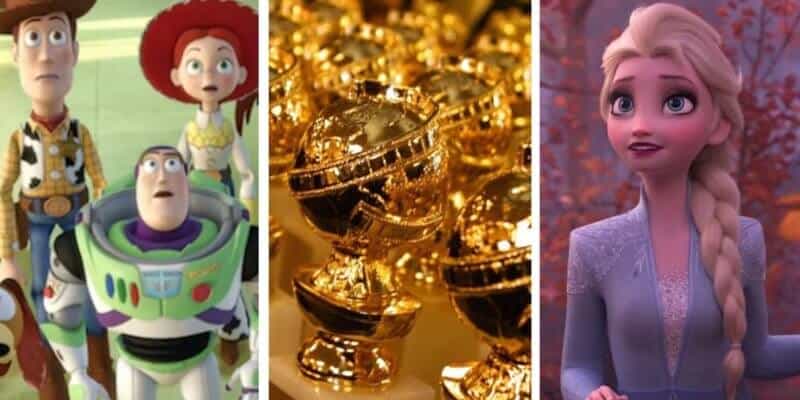 It’s that time of year again — The 2020 Golden Globes will be airing on January 5 of next year and the nominations have just been revealed!

It’s no surprise that Disney has several nominations on the list considering they have had a huge year in the box office and even broke the record of having the biggest year of any other studio in box office history.

Toy Story 4, which earned $1.074 billion, is also nominated for Best Motion Picture – Animated. This means that Disney has three out of the five nominations in that category.

But what is pretty surprising is that Avengers: Endgame is nowhere to be found on the list of 2020 Golden Globe nominations, especially considering it was Disney’s biggest earning film for Disney in 2019 and broke records on its own, becoming the highest-grossing film of all time. It brought in $2.798 billion worldwide.

Also missing from the list is Disney’s live-action film, Disney’s Aladdin, which has been getting a lot of buzz lately around Mena Massoud and the new spin-off series coming to Disney+.

Netflix is the company that actually ruled the 2020 Golden Globe nominations, which scored Marriage Story and The Irishman on the film side as well as The Crown and Unbelievable for the television side of things.

Netflix and Disney have always been competitors, but even more so now ever since Disney’s new streaming service, Disney+, has debuted. It will be interesting to see how things pan out at the 2020 Golden Globes, which airs on January 5, 2020.

Are you surprised by any of Disney’s nominations? Is there anything missing from the list that you would’ve liked to see? Let us know in the comments.

Comments Off on 2020 Golden Globe Nominations Revealed: ‘Frozen 2’, ‘The Lion King’, and more!