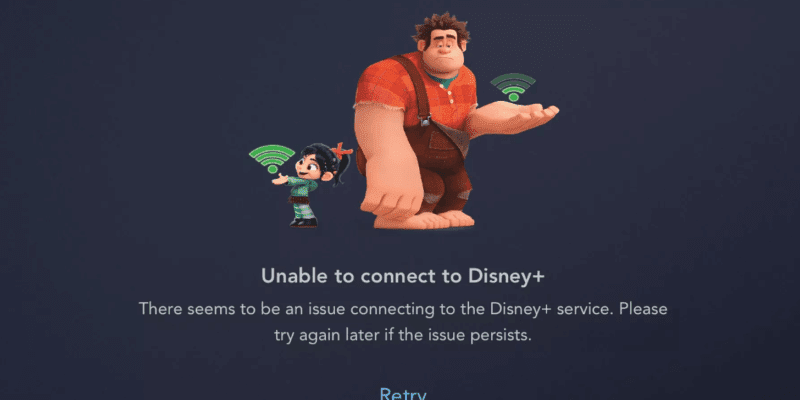 Initially, Disney+ was planned to launch at 9 a.m. EST, but then it got pushed up to 6 a.m. EST. And then, 3 a.m. EST., and Disney fans were excited to notice that the app was available for download and were able to start streaming the service in the middle of the night.

But, once the East Coast woke up, started downloading the app and tried to start streaming the service, it seems as if there has been an overload and Disney+ is now experiencing connection errors.

It seems as if not everyone is running into these errors with the newly launched service, but reports have been coming in across both Facebook and Twitter as well as other social media platforms over the last hour or two with connection error messages.

I’m just trying to watch Jeff Goldblum get happy about shoes, can we get a fix please? #DisneyPlus pic.twitter.com/G2ib27hNiu

There are a few different error messages popping up on the service, including this one of Mickey and Pluto who are visiting Outer Space.

#DisneyPlus what’s the point of billion dollar companies to launch unfinished products whether its video games or streaming services. So stupid. Not a good start. pic.twitter.com/BXZHqTVDjW

I saw a ton of Disney content on the service that I can’t wait to start binging. From classic Disney movies like Sleeping Beauty, Beauty and the Beast, The Lion King and Aladdin to original Disney+ series and films such as the live action Lady and the Tramp, Encore!, and The Mandalorian, to animated series such as The Simpsons, there is so much to stream once the service is back up and running.

Disney Pixar films are also available such as Monster’s Inc and Toy Story 3 as well as Marvel films like Avengers: Endgame and Captain Marvel.

Another aspect of the streaming service that subscribers are really looking forward to are all the documentaries that will be available, especially Encore!, from executive producer, Kristen Bell, which will bring together former cast members of high school musicals and then follow along as they re-create their original performance.

The highly anticipated Disney+ original series, The Imagineering Story, is also available at launch, which gives viewers a behind-the-scenes look at some of the upcoming Disney Parks attractions.

Personally, I cannot wait to relive my childhood and binge Disney Channel Original Series such as Lizzie McGuire and Hannah Montana as well as original Disney cartoons, including Steamboat Willie.

Disney Streaming Services has several teams of workers monitoring the new streaming platform launch 24/7, so we bet the company is already working on trying to fix this issue as well as address any other issues the service is experiencing to get things back up and running smoothly. Many users have reached out to the official Disney+ Help account on Twitter for assistance.

Hi @jeffrhind, we’d like to help. Please Follow/DM our support handle @DisneyPlusHelp and someone from Customer Service will reach out.

Let’s hope that the service will stabilize as the day goes on since there will only be more and more subscribers logging on from this point on.

What are you looking forward to streaming most on the new streaming platform, Disney+?