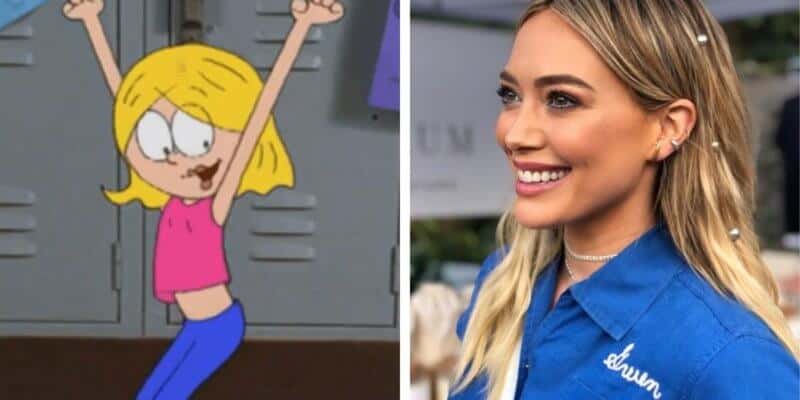 Lizzie McGuire fans — This is what dreams are made of!

As we anxiously wait for the reboot of Lizzie McGuire series to debut, which will be available exclusively on Disney’s new streaming service, Disney+, Hilary Duff is dropping some major hints that fans can look forward to with the new series.

On November 6, Hilary Duff shared some great news that we have all been waiting for! Duff took to Instagram to share a picture of her, in character, for the Lizzie McGuire sequel series.

Duff looks absolutely amazing (as always). But what exactly is she dressed as? Possibly a waitress? I also noticed that her outfit looks like it reads Gwen. Not sure what exactly that means, but fans do know Duff has confirmed Lizzie has her dream job, so maybe she is an actress playing a waitress named Gwen in a new role?

L is for… You can see in the second picture that Duff is wearing a necklace with an L, which obviously stands for Lizzie!

And now, Duff has confirmed not only will Animated Lizzie be returning to the Disney+ original series, but she will be returning with her iconic outfit. Yes, that’s right — the pink crop top, blue bell bottoms, and those iconic orange platform shoes will be making a come back.

Duff also confirms that Animated Lizzie will be the comic relief of the upcoming series.

Lizzo, the American singer, rapper and songwriter best known for her hit Truth Hurts, wants to make a cameo in the upcoming series and Duff is all for it!

In a recent interview with Entertainment Tonight, Duff said there was a Twitter exchange between the two celebs, discussing the possibility. “I think it would be a dream and she’s obviously the coolest,” Duff stated.

Duff was also asked about the return of Gordo and Miranda, Lizzie’s two best friends from the original series, in which she responds with “I cannot get in trouble tonight so I’m just gonna keep my mouth shut and you guys are gonna have to watch” as she giggles.

We already know Lizzie McGuire’s family will be returning in the new series, but I guess we are just going to have to wait and see if other iconic Lizzie McGuire characters will be making a comeback as well.

Is Lizzie Engaged to Ethan?

During the Entertainment Tonight interview, Duff was asked “Is there a chance Lizzie is engaged to Ethan?” in which she responds with “No, she is not currently engaged to Ethan Craft.”

The interviewer then follows up with “Okay, so like someone else? Like a new person?” in which Duff responds with “Like in his place?” and then the interviewer states, “Well you said that Lizzie’s engaged.”

“She.. Um.. I have no idea what you’re talking about,” Duff responds as she giggles.

I know, personally, I simply cannot wait for Lizzie McGuire to debut on Disney+. As a child, I always idolized Lizzie and now as an adult, I idolize Hilary Duff. This reboot is going to be nothing like ever before!

Are you excited to see Hilary Duff return as Lizzie McGuire in the upcoming Disney+ series?