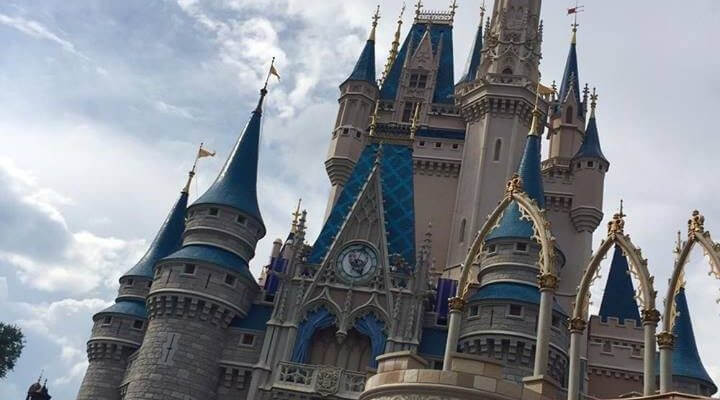 The magic of Disney theme parks is as much about timeless stories as it is about attention to detail.  Heartwarming classics and exciting adventures deliver exciting, memorable experiences for those who visit.

Making magical memories takes a lot of careful planning and a bit of pixie dust.  While icons like Cinderella’s castle and spirited spooks of the Haunted Mansion are obvious examples of this enchantment, there are quite a few delightful details that often go overlooked. 1. – 3. Main Street USA is the gateway to thrilling themed lands that make up the Magic Kingdom. Designed to be inviting on the way into the Florida theme park, Main Street has a few subtle details to guide the guest into a happy place.  Forced perspective via the shortened second stories of buildings and a slight incline of the street not only makes the journey towards Cinderella’s castle (also a forced perspective illusion as the higher up bricks are smaller) seem like a longer haul of anticipation, the same trick of the eye serves as a seemingly shorter stroll of egress when leaving. 4. – 5. Another arrival and departure distinction relies on the crowd preference to walk on the right side of the road.  Thus, upon emerging from under the train station (another deliberate transformation) when entering Main Street – food is found mostly on the right side of the street.  For those departing it is hoped, by placing most of the shopping on the right side when exiting, a few more dollars will also depart in purchasing tangible memories (aka souvenirs).

6. Even more magical manifestations on Main Street are the tributes to those who helped make the magic.  Special signage honors the creative collaborators with clever imagined businesses displayed on second floor windows of shops and structures along the turn of the century styled street.

7. – 9. Some surprises are found on a smaller scale.  These can be paw prints in front of Tony’s Town Square (of “Lady and the Tramp” fame) to a faux phone within the Chapeau (hat store) on Main Street (a similar phone found in Tomorrowland delivers out of this world conversation).

10. While each of the themed lands at the Magic Kingdom is designed to feel isolated from the other (via creative construction, varying atmospheric audio and perfectly planned plants), some lands seem to go the extra mile.

11. – 12.  To keep with 18th century appearances, Liberty Square is deliberately devoid of bathrooms (the ones within the Columbia Harbor House are technically located in Fantasyland).  The lack of lavatories is not without a means to an end; a close examination of the pavement provides proof.  The brown gravel like area in the center is not an accident – it intended to represent flow of emptied chamber pots prevalent in the time period. 13. Peer down at the ground around the Haunted Mansion’s ghostly guided hearse and hoof prints point a path to the tack shop nearby. 14. – 15. If the Liberty Bell looks too good to be true, it’s because it was cast from the very same mold as the historic bell it represents. 15. – 17. A count of the lanterns in the Liberty Tree (a nod to the 1954 Disney movie “Johnny Tremain”) will reveal that there are 13, one for each colony. Paul Revere’s ride is also represented by the two (if by sea) lit lanterns displayed within a window of the Hall of Presidents.  Within that attraction is one of two specially approved icons.  It took an act of Congress to allow the United States Presidential seal to appear here (the second is located in the American Dream attraction at Epcot). 18. While Main Street, Cinderella’s Castle and Liberty Squire provide a plethora of perfect examples of detail devotion, the creative culture is crafted into all areas of the theme park.  Country Bear Jamboree, for example has claw marks on the floor. 19. – 20. Unseen details also play a role in affording an enjoyable visit.  Chewing gum is not sold at the Magic Kingdom, aiding in keeping unsightly spots of the spent snack from becoming stains on the ground.  Trash cans are always close by within 30 steps. 21. Even the color of the concrete on the ground is deliberate done to both act as a subtle guide between lands but also add the perfect reflective hue to photographs. Most of these enchanting enhancements are often missed by many as they dash from attraction to attraction.  Taking a moment to stop and look all around can reveal a delightful depth of deliberately designed details that make an ordinary day at Disney World a truly magical experience.