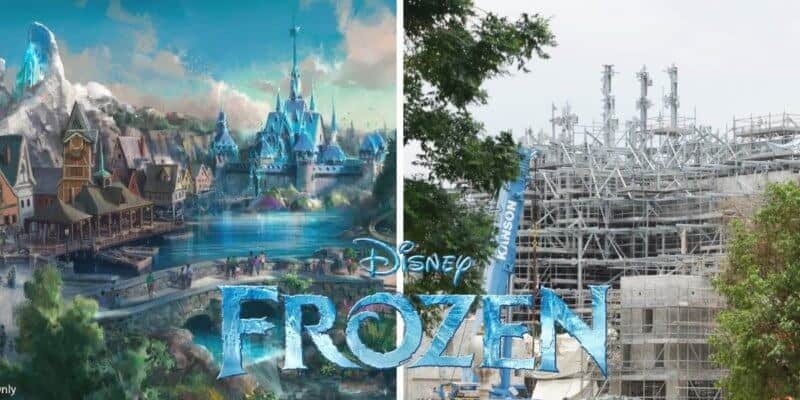 In case you aren’t familiar, the highly-anticipated Frozen land was first announced in 2016 and will be home to a stunning atmosphere, unique attractions, and may even allow Guests to bump into some favorite characters from the record-breaking film.

It wasn’t long ago Inside the Magic reported that certain aspects of the Frozen land are beginning to take shape — Including Arendelle’s mountain range! Now, Guests can see Arendelle’s North Mountain construction from Main Street, U.S.A.!

Disney Imagineers have been hard at work as construction continues on the Frozen-themed land, and thanks to Twitter user HKDL Fantasy (@hkdlfantasy), we can see certain structures continuing to take shape. In fact, now Guests can see the North Mountain structure from Main Street, U.S.A.!

As Arendelle’s North Mountain continues to rise, its early structure can now be seen prominently from Main Street, USA.

The rest of the mountain range is now vastly covered with sculptured mesh for rockwork.

As Arendelle’s North Mountain continues to rise, its early structure can now be seen prominently from Main Street, USA.

The rest of the mountain range is now vastly covered with sculptured mesh for rockwork.#HKDL #HongKongDisneyland #HongKong #Arendelle #Frozen pic.twitter.com/FBKPHD3q3m

At this time, we do not have a set opening date for Arendelle: World of Frozen but it is exciting that Guests will now be able to see the North Mountain from Main Street, U.S.A.! As construction is continuing, we here at Inside the Magic cannot wait to see this land once it’s complete.

What can Guests expect from Arendelle: World of Frozen?