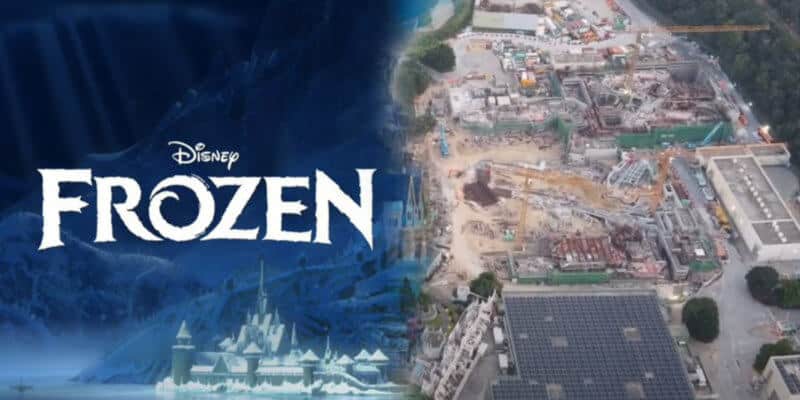 As construction comes to a halt at the Disney Parks in the wake of the recent pandemic, we can’t help but look toward the exciting adventures and stories that are still to come — one specifically that will be a freezing good time: Frozen Land at Hong Kong Disneyland.

In a series of new images taken from recent drone footage, we see the current state of the Frozen land at the Hong Kong Disneyland Park, which seems to be coming along in preparation for its December 2021 premiere quite nicely.

Pictured above, we can see the land’s entrance, which will sit right behind the theme park’s Dumbo attraction. In the image below, we can see the Wandering Oaken’s Sliding Sleighs roller coaster construction, giving us a good look at how big the attraction will be and how it will sit in the park.

Guests will enter from the left side of the photo pictured above, making the Frozen-themed roller coaster one of the first sights guests will encounter when entering the area.

Upon opening, the attraction will take guests on a winding journey through Arendelle. The experience will begin when you visit Oaken’s infamous store. Then, Olaf and Sven help pull your sled to the top of the lift before sending you on your way.

During the announcement of the Frozen roller coaster in August at D23 Expo, Bob Chapek, CEO of the Walt Disney Company, spoke on his excitement of the land, saying: “Soon guests will be able to visit the kingdom of Arendelle with all of its sights, sounds, cuisines, and traditions.”

In addition to Wandering Oaken’s Sliding Sleighs roller coaster, the land will also feature an identical version of the Frozen Ever After attraction at Walt Disney World’s EPCOT.

Arendelle: World of Frozen was first revealed on November 22, 2016, when the Walt Disney Company and the Hong Kong Government announced the plans for the multi-year expansion costing HK $10.9 billion.

Will you be visiting Wandering Oaken’s Sliding Sleighs coaster when it premieres at Hong Kong Disneyland in 2021? Let us know in the comments!