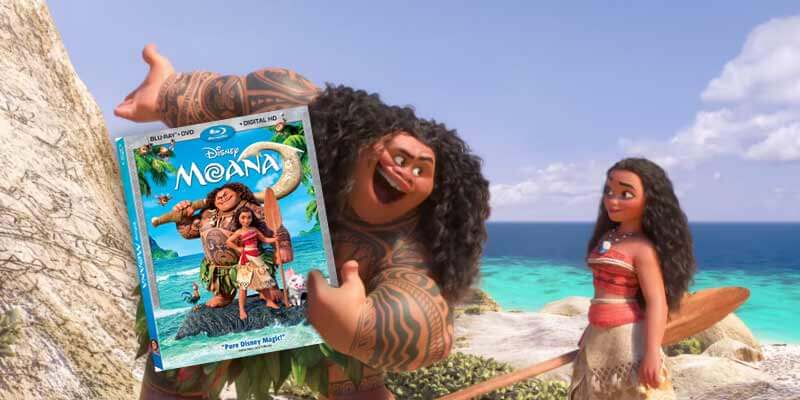 It’s time for Disney to say “You’re welcome!”, as they have delivered one of the most comprehensive home video releases in the history of their beloved animated features. The Oscar-nominated movie “Moana” arrived on Blu-ray and DVD today (after being released on Digital HD and Disney Movies Anywhere two weeks ago) and I literally can’t think of anything it’s missing.

By my count, the disc includes over three and a half hours worth of bonus features, which I’ve painstakingly listed below along with their running times.

Theatrical Short Film: “Inner Workings”
Intro (0:48) – Director Leo Matsuda and producer Sean Lurie talk about the inspiration for the short.
Short (6:26) – The delightful Disney short about what goes on inside an everyman’s head as he goes through an average day at work while he longs for fun at a nearby beach.

Voice of the Islands (31:13) – The longest featurette on the release is a fascinating behind-the-scenes documentary detailing the research trips that the creative team took to the Pacific Islands and how those trips influenced the story of “Moana” and helped shape the look of the movie itself.

Things You Didn’t Know About… (4:00)
Ron Clements, John Musker, Auli’i Cravalho, and Dwayne Johnson – The directors and stars of “Moana” answer some quick-fire questions about their day-to-day lives.
Mark Mancina, Opetaia Foa’i, and Lin-Manel Miranda – The composers behind the music in “Moana” describe their daily routines and touch a bit on their songwriting histories.

Island Fashion (5:13) – Costume designer Neya Bové describes her process in coming up with the wardrobe of Moana and some of her favorite background characters.

The Elements Of… (14:14)
Mini-Maui – Animator Eric Goldberg takes center stage as he talks about the hand-drawn animation process used to bring the tattoo character Mini-Maui to life.
Water – The visual effects team behind “Moana” discuss the difficulties in animating the vast amount of water in the movie.
Lava – The technology behind the movie’s climax is explored in detail.
Hair – Another notoriously tedious procedure, the team explains how Moana’s flowing hair was simulated in the film.

They Know the Way: Making the Music of ‘Moana’ (12:37) – Musical coposers Mark Mancina, Opetaia Foa’i, and Lin-Manuel Miranda get their own feauturette, showcasing the development of the movie’s songs and score.

Deleted Song: “Warrior Face” with introduction by Lin-Manuel Miranda (3:41) – Miranda talks about one of the songs that was removed from the feature, which took place just before Moana and Maui’s confrontation with Tamatoa, recorded in demo form by members of the cast of his Broadway musical “Hamilton“”. We also get to see a storyboarded version of the sequence.

Fishing for Easter Eggs (2:52) – This is my favorite short featurette included in the bonus materials, and any big Disney fan is sure to get a kick out of voice actors Auli’i Cravalho and Dwayne Johnson explaining where to find many of the in-jokes and Disney Easter Eggs hidden throughout “Moana””, including Aladdin’s lamp, Flounder from “The Little Mermaid”, Olaf’s nose, and even Baymax. Deleted Scenes with introductions by John Musker and Ron Clements (25:56) – Musker and Clements talk about each deleted scene before they are presented in storyboard format with scratch audio. The scenes mostly take place early in the film before Moana leaves Motunui, and are presented as follows:
“Grandmother’s Warning / Legend of Maui”, “Canoe Race”, “Father, Daughter, Boat”, “Education of Moana”, “Discussing Moana’s Future”, “Race the Wind / Ties that Bind”, “Under the Sea”

“How Far I’ll Go” performed by Alessia Cara (3:04) – The full official music video of the pop-music version of the Oscar-nominated song written by Lin-Manuel Miranda.

“How Far I’ll Go” Around the World – An interesting video cut together from all the different foreign-language versions of the song.

Audio Commentary with directors Ron Clements and John Musker (1:47:12) – Captivating as always, Clements and Musker give viewers a thorough and in-depth examination of the work that went into creating “Moana”, with nods to just about every department of Disney Animation responsible for the finished film. Of course, the wonderful movie itself is included on the disc as well, which brings the grand total of content to almost five and a half hours. I’d say that’s well worth the price of the Ultimate Collector’s Edition Blu-ray set, which, yes, also gives you a 3D Blu-ray, a “Moana” DVD, and a Digital HD copy of the movie.

As for technical specs, the feature looks absolutely fantastic, as should be expected by this point. It’s presented in 1080p High Definition, with a widescreen aspect ratio of 2.39:1. Audio is in English 7.1 DTS-HD, with a 2.0 Descriptive Audio track, and Spanish and French-language 5.1 Dolby Digital. Other than Ultra HD, you really can’t get much better quality than this in a home video release.