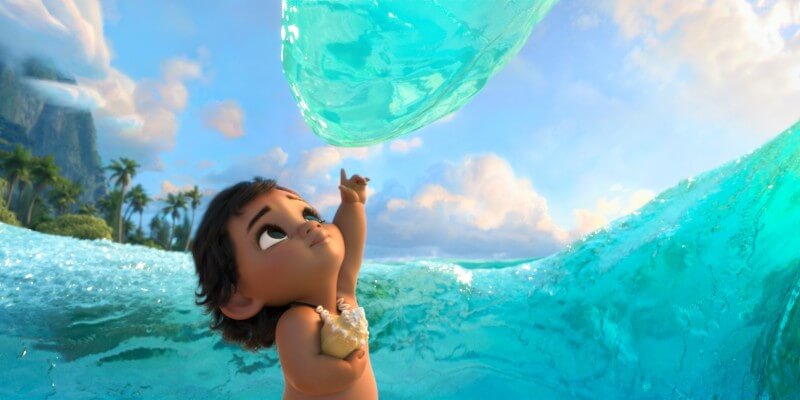 In part 5 of our in-depth interviews with the creative team behind Walt Disney Animation’s latest animated feature “Moana”, I talk with visual effects supervisor Kyle Odermatt and technical supervisor Hank Driskill about what it took to make the vast amount of water in the movie look as realistic as possible.

ITM:  Give us a sense of both of your histories with Disney, and which projects you’ve proudest to have worked on.

Kyle Odermatt:  We worked together on ‘Big Hero 6’ prior to this. I’ve worked on a number of [‘Moana’ directors Ron Clements and John Musker] movies in the past. I’ve been at the company for twenty years. I worked on ‘Treasure Planet’, that’s one of the first big projects that I worked on here. I worked on ‘Chicken Little’, our transition to CG-animated films. I worked on our return to hand-drawn, ‘[The] Princess and the Frog’. I worked on a hybrid short, ‘Paperman’. So those are some of the kind of things I’ve been involved with, both on the 2D side, CG-for-2D, and the full CG side. I love that we do it all.

Hank Driskill:  I’ve been here nineteen years now. I came here right after ‘Titanic’. [That] was the last film I worked on before coming here. I started here in a cross-show leadership role and then really missed being on production, so I stepped back into production right as we were [starting] a stint doing visual effects here for a few years in-house. So I worked on ‘102 Dalmations’ and ‘Reign of Fire’ here, then did some stuff with special projects, worked on early pre-production for ‘Rapunzel’, [which] eventually became ‘Tangled’, then rolled onto ‘American Dog’, which became ‘Bolt’. I supervised [the visual effects in] ‘Bolt’, then worked on the stereo [3D] conversion projects for ‘Beauty and the Beast’ and ‘[The] Lion King’. [I] worked with Kyle on ‘Operation: Secret Santa’, which was the Prep & Landing short, then I supervised ‘Prep & Landing 2: Naughty vs. Nice’, did some stints helping out on the floor as a techincal director on ‘Tangled’ and ‘Wreck-It Ralph’, and then stepped onto the early pre-production on ‘Big Hero 6’ to supervise. ITM:  Once you were brought on board ‘Moana’, what did you perceive as being the biggest visual effects challenge in making the movie?

Odermatt:  We’ve talked about the fact that much of our environment was going to be out on the water. We knew that doing water shots in the film couldn’t be as challenging as they were at the time [when pre-production started]. We knew that that would have swamped our effects department if we had to do each shot with the technology we had at the time. So we knew [we had to reach] a level of development that would allow us to make those shots far easier to accomplish, at what we knew was going to have to be a very high creative bar. [That] was the main thing that we talked about early on. We wanted to automate a simple boat shot.

Now, in talking with our heads of effects, we are [currently] running at probably about a quarter of our simple shots [going] through without being touched by anybody. So we did not ever achieve our full goal, but those shots that do need to be touched are far easier and accomplishable because we pushed so hard on automation.

There [were] a tremendous amount of pieces that had to [come together] to make just the simulation successful, and then all of the glue and pipeline pieces to make it so that we could run that whole system without human intervention. So that was one of the biggest things, and that was just simply to accomplish a boat on the water, which we knew we were going to have. Now, the water challenge itself is far, far beyond that.

Driskill:  We knew we had done water in the past. Anna and Elsa’s parents die [in ‘Frozen’] when their ship wrecks, Elsa runs across the lake and freezes it, Baymax and Hiro [in ‘Big Hero 6’] drop off the Golden Gate Bridge and fly across the water. But in both directions, we knew that shot-by-shot those shots have been very challenging in the amount of time and energy we were spending on them in each of those films, and the bar that we were reaching in the end result wasn’t what we wanted to get to for this movie. So we knew we needed to expand both what we were capable of achieving from a visual standpoint as well as make it so we could do hundreds and hundreds of shots like that.

So we spent a lot of time on a new way of solving water, but also a lot of time on the process and pipeline, and all the people who would touch water, how it would be set up, how it would pass through the various departments, so that everyone could see the water, understand what the moving ground plane of a shot was doing, and then make it all the way into the render and behave itself and look beautiful. So there [were] a lot of moving parts to solving the water for the movie.

Odermatt:  It’s actually confusing with my title; I’m the visual effects supervisor, meaning people think that I head up the effects department. But if you take that title on its face value in the industry, on a live-action film, the visual effects supervisor is in charge of all the digital elements in the film. These [animated] films are entirely digital. So yes, everything is an effects shot from a live-action standpoint. In a live-action film, they consider it an effects shot if it has CG in it. Our entire films are CG. So from that standpoint, every shot is an effect shot.

Driskill:  Characters, props, and simple environmental effects like a tree moving or whatever, those happen elsewhere [in another department]. But the water, the lava, those kind of effects happen in the effects department. That’s one facet. And Kyle and I both supervise all of the departments, so effects is one component of what we do. But one of the things about this movie was things like water that in the past was an effects shot, here [it] touches every department in this movie. From layout, [to] animation, technical animation, effects, lighting… all of them are touching the water, doing things that they wouldn’t have, necessarily, on previous films.

Odermatt:  And there’s sort of an order of operations; the fact that the water is our ground plane, as Hank used the term earlier, for much of our film, makes things extremely challenging. So in layout, they have to define the look of the water, the settings for the water for any given sequence, because it’s different in almost every sequence, the wave action, the amount of wind, that kind of thing. Then we need to simulate the buoyancy effect of the boat on the water, so that then character animation, as they place the characters on the boat, can animate to the subtle rocking of the boat as it moves through the water.

So that is a level of complexity that does not exist when a character is walking down the street or through the forest. We have some of those shots too, but we have a lot of the other type. I’m not sure we anticipated all the complexity that would come from the content. We knew it was going to be hard… it’s actually really pretty hard.

“Moana” will be released in theaters this Wednesday, November 23rd.