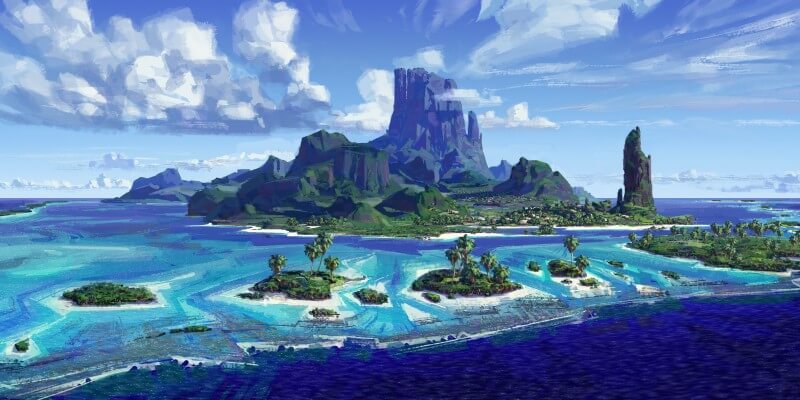 In part 4 of our in-depth interviews with the creative team behind Walt Disney Animation’s latest animated feature “Moana”, I talk with production designer Ian Gooding about how he helped create the tropical environments that Moana and Maui call home.

ITM:  Give us an idea of your history with Disney and which projects you’ve worked on that you’re most proud of.

Ian Gooding:  I started in 1990 as an effects in-betweener in traditional 2D animation, a long time ago on a featurette called ‘[The] Prince and the Pauper’ that came out with ‘[The] Rescuers Down Under’. And at some point along the way I ended up switching departments to [visual development], and then my first art directing gig was “Runaway Brain”. That was a really fun project. We made that in France at the time, at the Paris studio.

I’ve worked on so many different things. I really enjoyed working on “Wreck-It Ralph” and ‘[The] Princess and the Frog’, two of my more recent ones. ‘Wreck-It Ralph’ just had such a fun variety of worlds. And ‘[The] Princess and the Frog’ was similar to [‘Moana’] in that it took place in a real place, but we had to do a lot of research to try and nail what it felt like to be there. 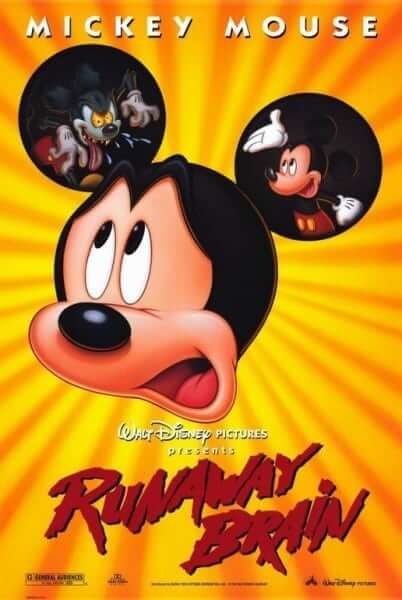 ITM:  How did you come aboard ‘Moana’?  What appealed to you about the project and what were the biggest challenges?

Gooding:  [‘Moana’ directors Ron Clements and John Musker] asked me to work on it, and I love working with them, so that was a gimme right from the start, that I would say ‘yes’. It terrified me [laughs], because there’s no metal, no glass, no architecture to speak of. So how do you get those wow moments? There’s only so many orange sunsets you can put in front of the audience, but I figured, ‘it’s a good challenge, so let’s do it.’

The biggest challenge was just nailing that time and place, so that it couldn’t be the Caribbean, or it couldn’t be Baja, California or something. I had to really feel like the South Pacific two thousand years ago, as close as we could make it.

ITM:  Tell us more about the research process on ‘Moana’ and how your trips to the South Pacific helped shape the movie.

Gooding: You do a lot of research online first, but it’s very confusing. Even if you do something like tattoos, for example, you put in Samoan tattoos, you’ll get pictures of things from New Zealand as well, because of the way the search engine works. So it’s really hard to get your head around it until you actually go talk to the experts and figure out, ‘these designs are from Marquesas and Tahiti, these designs are from Samoa and these are from Tonga, these are from Fiji, and these are from New Zealand,’ so you can have something really authentic in the movie. And we had to research everything like that.

We talked to experts on the pollen records, people who have taken core samples of earth and figured out, [for example] ‘when we carbon-date this layer, this is two thousand years ago and these are the pollen grains that happened back then, so these are the plants that were available to them.’ And you could see the pollen record change when the Polynesians arrived. All of a sudden, you’d see something like taro that wasn’t there before, that they brought with them. So you can tell things like that, too, like what was there and what they brought with them. It’s pretty interesting.

You get really in-depth into things, like I did a painting of the volcanic evil island, this was really early on and I was very pleased with myself. And we showed it to John Lasseter and he [said], ‘this looks like Mordor. This doesn’t look like the South Pacific.’ So I thought, ‘oh my gosh, I have to figure this out. How do I make a volcano look specifically from that area?’ So you talk to people [who] are experts in that, and you learn about the geology and why those volcanoes are different from the volcanoes in the other side of the Pacific, Mount St. Helens for example, [which] explodes but doesn’t have a lot of liquid lava, and why that is, and why the islands are shaped the way they are, and why they have those barrier reefs and all that.

It’s such an amazing learning process and I find myself getting into these things that I never would have thought I’d be interested in before. And you find out fun facts, like ‘there are more creatures that live in the sea that produce light than there are that don’t.’ We only see the fish at the top layer, but once you get past where the light ends, that’s where most of the species live, and almost all of them produce light. And also most of them are tiny, microscopic, so you don’t really see them unless you go to the beach at night and see the waves breaking and glowing. So that was fascinating.

ITM:  Contrast is always a key factor in animation. How do the environments and feel of the movie evolve as the story progresses?

Gooding:  There are a couple big shifts. One of them, obviously, is [Moana] goes to the Underworld, which is an entirely fictitious part of the movie. And that we wanted to have a big punch, so we would sort of gray down the light and the color up to that point, and then when they [arrive], then it’s this bioluminescent place where all the plants are actually emitting light and it’s just crazy colorful and amazing. And then when you come back out again it’s not [as colorful] again, so you get that big contrast. You feel like you’ve been someplace truly magical.

But even in smaller ways, there’s a color, this super-saturated turquoise-green that we reserved just for the [Ocean] character when she’s interacting with Moana. The water that’s just lapping up on the shore will be a little bit more realistic-colored, but when it starts behaving unnaturally and becoming a character, the color is heightened so you have that contrast, so that you know that something’s up. And it feels okay that something more unnatural is happening. 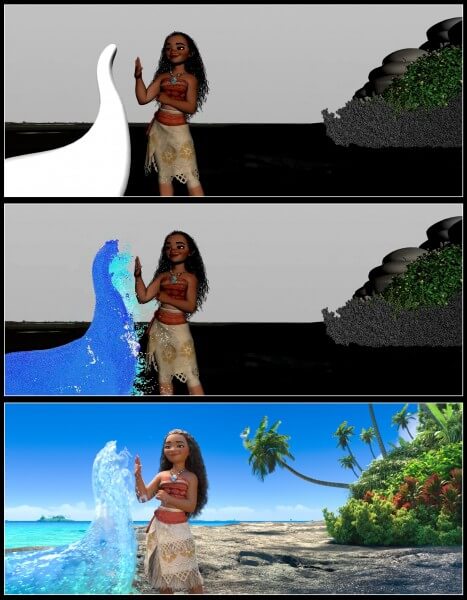 And then the other part of the movie that is really different [is] we have a stylized song sequence that is just really knock-your-socks-off different. You go into a whole other world, just within the context of part of this song, Maui’s song that he sings, called ‘You’re Welcome.’ It’s a great song. And [the sequence was designed] trying to honor the art from that part of the world. It’s all done as tapa backgrounds, like a miniature set made of tapa cloth. It’s really fun and cool [with] colored light. It’s sort of like ‘Friend Like Me’ in ‘Aladdin’, but for the South Pacific, if I had to liken it to something.

ITM:  How much is the environments team working with the other departments on the movie, such as character design? At what point in the process do you have to make sure that all the individual elements fit together?

Gooding:  We would like it to come right at the same time. On this movie, the shape language for the environments came later, because we were trying and trying and not coming up with something that felt like it really honored the location. And in the meanwhile, of course, you have to keep developing your characters. So it was a really great thing that they did end up intersecting, and we took the characters into account when we were coming up with the language for the backgrounds.

I do think that’s particularly important, that they don’t feel like they just don’t belong in that world, and I’ve seen that before. It can be a little distracting.

ITM:  Finally, which locations in the movie do you think audiences will respond to most, and which are your favorites?

Gooding:  I really love when the Ocean parts and [young Moana] walks in and it’s like she’s at the aquarium, and we get to see all the colorful fish swimming around. The magic of the fact that the water is doing something really crazy and unusual, and you see the beautiful colorful coral and that sort of thing. That was really my favorite thing to work on.

The Underworld is another one. It’s much less dignified and adorable and much more goofy and over-the-top, but it’s really beautiful. It’s one of those things that, when we talk to people from the [South Pacific] area [and ask], ‘what’s your picture of how the Underworld would be?’ The only thing that was more or less consistent with their answers was that it was a beautiful garden, so we took undersea life and tried to make it look like a garden. So tube worms look vaguely like coconut trees and so forth. And we used the real colors of these bioluminescent plants and animals from under the sea to make it up. So it’s really stunningly beautiful in sort of a wacky way.

“Moana” will be released in theaters nationwide this Wednesday, November 23rd.