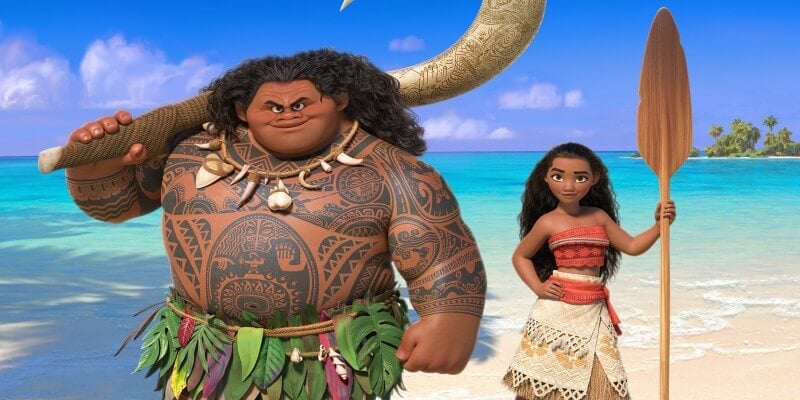 In part 3 of our in-depth interviews with the creative team behind Walt Disney Animation’s latest animated feature “Moana”, I talk with head of animation Amy Smeed and character art director Bill Schwab about what it took to bring the movie to life.

ITM: Tell us how you got started at Disney and what projects you’ve worked on since then.

Amy Smeed: I started here about eighteen years ago. The very first production I was on was called ‘Dinosaur’, and I was in a very different position than I am now. It was my dream to become an animator, and I just wanted to get my foot in the door any way that I could because I knew I would learn from all the people around here. On the project ‘Chicken Little’ was when I got into the training program, and then was assigned a mentor and kept animating. The films I’ve worked on for the last few years were ‘Tangled’, ‘Wreck-It Ralph’, ‘Frozen’, ‘Big Hero 6’, ‘Moana’, and films before that [like] ‘Meet the Robinsons’, ‘Bolt’, [and] ‘Prep and Landing’.

ITM: How were the character designs in “Moana” developed?

Schwab: On main characters, [we] typically do a lot of exploration. We really want to make sure we’re covering anything and everything that a main character to be. But I would say the research, particularly from that second research trip, was a huge influence for me really trying to get her to feel very specific to the Pacfic Islands, and feel like a real person. We wanted, ultimately, [to end] up with a very believable-looking character. We were always going for believability, and I think Moana has that.

And also I’d say one more thing to the design of the characters– the same thing with me on ‘Frozen’, because I did a lot of the design work on ‘Frozen’ and even within your style, there’s always a range. You may have [Moana’s rooster friend] Hei Hei on one end of the spectrum [or the Duke of] Weselton in ‘Frozen’, and then you have Anna and Elsa on the other hand, so it’s always like arriving somewhere and then keeping everyone within that range. I think that historically Disney does that really well, even if you look at Snow White and then you look at the Dwarfs, they all fit in the film, but there’s a huge range.

ITM: And how did the animation department take the designs and use them determine the movement style of the characters?

Smeed: Hyrum [Osmond, co-head of animation on ‘Moana’] and I, we met with [‘Moana’ directors Ron Clements and John Musker] up front to talk about the style and what [they were] envisioning for the film. We had a lot of conversations with them, and we wanted to push things, because we’re always trying to push things, [and] Ron and John have a very cartoony [style] in the past shows that they’ve worked on. So we tried to bring that into a lot of our characters, especially with characters like Hei Hei. All the characters need to live in the same world [as] each other, but some of them we felt like we could push more than others. Tamatoa, who’s a big crab [as well], we felt like we could push those characters [in a cartoony direction] a little bit more. And I think with the main characters, we wanted them to have a little bit more of a naturalistic feel. As a group, as a team of animators, I feel like every project is just building on top each other, and the team just gets stronger and stronger, which is amazing.

Schwab: Yeah, and we’ve all worked together on quite a few films now, and I think there really is a trust that has been built, and you just learn. You learn every time. It’s like, ‘Oh, okay. Let’s try this this time,’ you know?

ITM: During your research trips, you took a lot of photos of the Pacific Island locals. Did those photos combine to help shape the look of the character of Moana?

Schwab: I think so, yeah. It definitely wasn’t [just] one, for me. It was an amalgamation and a feeling of specificity, you know? Regional specificity… being sixteen [years old], also, which comes through in the animation so clearly. But from a design standpoint it was like, ‘she’s not a kid, she’s not quite an adult’, so that was a challenge as well.

ITM: Were you surprised at Auli’i Cravalho’s physical resemblance to Moana after she was cast?

Schwab: It’s amazing. I mean, [the character] was [already] designed and her model was built. She was quite far down the pipeline when Auli’i was cast, and it’s a perfect fit.

Smeed: We were doing animation tests on the character before we knew her voice, and then hearing her voice and getting to meet [Cravalho] after, it is a perfect fit. She has such an energy to her that we were trying to [capture]. One of our challenges in animation is making her feel like she’s a teenager, like she is sixteen years old. And I think Auli’i brings that out with her voice, and then we’re trying to bring that out in our acting performance of what her facial expressions are maybe her hands and just the way she moves.

Schwab: And [Cravalho] is fifteen going on sixteen, and turns sixteen almost the day of the premiere. So it’s pretty incredible.

ITM: How much are you looking for physicality in the casting process? Does a more physical actor help the animation team?

Smeed: We are not part of any of the casting process. I don’t want to speak for them, but I imagine they’re looking for the best vocal performance. [But] we do look at the reference when we’re animating scenes. For us, when we were looking at Auli’i, it was more just to figure out, ‘Okay, she needs to feel like a sixteen-year-old, so what are those little mannerisms that we can take from that?’ So the animators did have access to that, and I think a lot of it was just picking up on those little tiny traits and then kind of sprinkling it through their scenes.

And then a lot of the animators, they’ll do their own thumbnails before they start a scene, and they’ll show that in dailies. Some animators will act out a scene to get the physical performance of what’s happening. But we’re always making sure that we’re putting those sixteen-year-old qualities into [Moana]. And [with Dwayne Johnson], he has that famous eye thing that he does. That was definitely taken from him.

ITM: Dwayne’s character Maui was originally bald. How does that kind of radical change in appearance affect the character?

Schwab: It’s interesting, because when we first tried the hair he was still a much shorter character. [And now] I think he looks great as a really tall, powerful character with the hair. I think it’s just a cool look. And Moana initially wasn’t going to have her hair up, and then we tried it up and she looked so cute. It was one of those things where I was like, ‘Oh, she’ll have her hair down the whole time.’ And then I was like, ‘No, she should put it up while she’s sailing and doing all this stuff,’ and it just looked amazing.

Comments Off on INTERVIEW: Disney animator Amy Smeed and character designer Bill Schwab discuss the look and feel of “Moana”