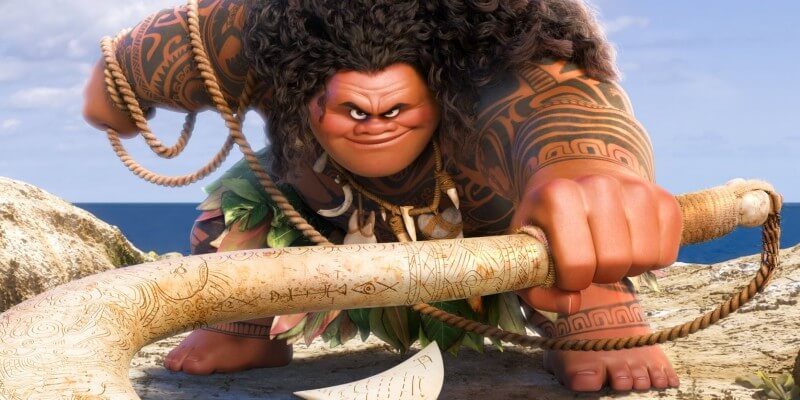 As I’ve said quite a few times over the past year, Disney Animation Studios is on a roll. Hot on the heels of this past spring’s enormous critical and financial hit “Zootopia” (not to mention their innumerable other recent victories), the company is releasing its newest effort Moana into theaters just a few short weeks from now, and all indicators point to another smash success.

This summer, I was fortunate enough to attend a media preview for the film with several presentations by the creative team. Afterward, I had the chance to sit down with some of the key players to discuss the process of making the movie. Over the next week or so, I’ll be sharing these interviews with the Inside the Magic audience in the hopes of giving a better understanding of how a Disney animated feature comes into being.

Up first is the duo of Head of Animation Hyrum Osmond and Character Animator Eric Goldberg, who joined me face-to-face in a discussion of the character of Maui (portrayed by the voice of Dwayne Johnson) and how the animation department brought the mythical demigod to life.

Inside the Magic:  First of all, tell me a little bit about your history with Disney Animation.

Hyrum Osmond:  I came on to the studio back on ‘Bolt,’ and I’ve been here ever since. I supervised Olaf on ‘Frozen’ and then moved onto this project.

Eric Goldberg:  I started here in 1990, my first gig was animating the Genie in ‘Aladdin,’ [I] codirected ‘Pocahontas,’ animated Phil in ‘Hercules,’ directed two sequences in ‘Fantasia 2000,’ animated Louis the alligator in ‘The Princess and the Frog, and [now I’m] doing [Maui’s living tattoo counterpart] Mini-Maui.

Inside the Magic:  What can you tell me about the character of Maui and how the animation team approached his style of movement?

Osmond:  Maui is this larger-than-life character. He commands the respect of the room, he [has] this large presence, and throughout the film, he is helped by Moana to recognize what he needs.

Goldberg:  I like to think of him as, ‘Hey guys, I’m the sun. You all are in the solar system, okay? Everything revolves around me.’ And he’s got this confident bravado that I think is certainly fun to watch, but without giving too much away, it’s a bit of a cover. And we find out more about Maui’s past as the film unfolds.

I think what [Maui animator Mack Kablan] has done with his style of movement, in terms of him being confident, and giving him a swagger and giving him this kind of easygoing attitude, is great, and you see that in the movement. I was describing to somebody yesterday about the process of character animation, and the movement itself is so important. Moana will not walk into a room swaggering, but Maui will. They’re just two separate characters, and you think of ways to show that through their character movement and how that’s physicalized.

Inside the Magic: In the movie, Maui has a Jiminy Cricket-Esque conscience in the form of his living tattoo, Mini-Maui, which was created using traditional hand-drawn animation. Can you tell me a little about what led to that decision?

Goldberg:  I think, first of all, it seemed like a natural fit. If you think of actual tattoos, they’re hand-drawn. Okay, they’re hand-drawn on somebody’s body, but they’re hand-drawn. And so, it seemed natural to have hand-drawn animation represent that. And with [‘Moana’ directors John Musker and Ron Clements’] background, particularly in traditional animation for all the films that they’ve done before, they wanted to see an element of hand-drawn animation in this film as well. And they weren’t quite sure where that was gonna go. You know, maybe there would be vignettes of Maui’s past, or maybe there would be certain design things that they would do, but as they were working on the story, this character [of Mini-Maui] emerged as his own personality, really, and I think that seemed like the perfect fit.

Inside the Magic:  What’s the technical process of getting the hand-drawn tattoo onto Maui’s CG-animated body?

Goldberg:  [laughs] I can’t even tell you all of the technical stuff, but I can give you kind of the layman’s version. We’re collaborating with the CG artists, and we’re back-and-forth. For example, I was just back-and-forth today with [assistant animator Manar Al Tawam] for the fist-bump scene. And we determined the kind of action that will take place, both on main Maui and Mini-Maui, and how the two will interact, what frame numbers will take place on, you know? So that is the first part– we both do our blocking, me with hand-drawn, and the CG animators with CG, and we get that in front of the directors and Hyrum, and everybody gets to see it and comment on it. And then we both go away and address notes and continue backing-and-forthing until it really looks like the two of them are interacting together.

Goldberg: One of the things that are a technical aspect that sounds simple but isn’t is eyeliners. You always have to make sure that the two of them are looking at one another, and if they’re making contact, their contact point has to be right. So if they are doing a fist-bump, for example, you can’t just have the CG animator animate the fist-bump into the center of the area where Mini-Maui is. We have to draw a pose drawing to show where Mini-Maui’s fist is, import that into the CG animation, and then the CG animator has to match that.

If you map a flat drawing onto a three-dimensional surface, it’s going to distort. So they have to find ways of controlling that distortion in those areas so that the 2D graphic still reads properly. Then there’s the idea of how much they have to go through to make it look like it’s actually ink that has bled under the skin and fades out a little bit. And if somebody actually has a tattoo, it might leave a raised portion of the skin, which then lighting effects, if it’s in the hot sunlight. So all this stuff to make it really look like it’s a tattoo on his body, and not just an ink drawing planted there.

Inside the Magic: In broad terms, what was the animation department’s goal when you set out to make ‘Moana?’

Osmond:  What we strive to do on this film and our objective is always our characters’ approach to connect with the audience. There’s a lot that’s involved with that. Understanding who our characters are [and] the subtext of what is going on in their minds at any given point. And I think the amount of research we do as an animation crew is essential. The amount of time we talk with the crew about who these characters help dictates the performance. If you go into the theater and that audience is not connecting with your characters, that’s where we failed in our job. So I think that is a huge priority for us, just making sure that happens.

Goldberg:  Subtext is an exciting facet. If you take a character like Maui, at least until he becomes a little more vulnerable, he’s always got a subtext going. He’s always got an agenda, a plan that he wants to do, whether it tramples over somebody else or not. But he doesn’t give that away. He doesn’t actually show that on the surface. He’s Mr. Charming. There’s always subtext going on with him. And I think that’s a really cool aspect that animators get to play with as well.