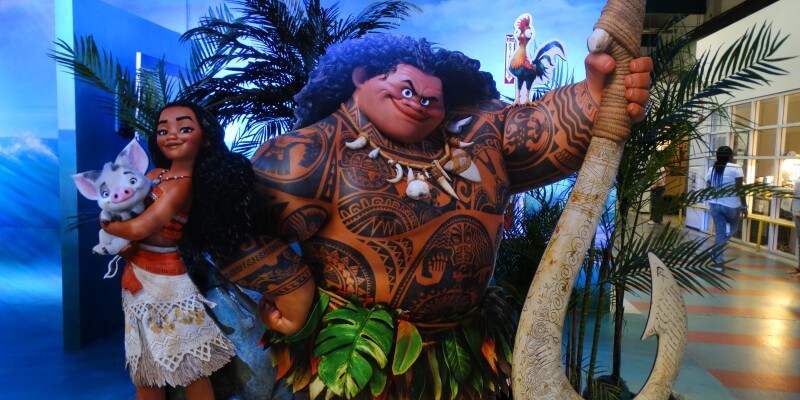 Walt Disney Animation Studios is having a stellar decade. Since 2010, the company has released some of the most well-received and spectacularly popular output in its long and storied existence. “Tangled,” “Wreck-It Ralph,” “Big Hero 6,” “Zootopia,” and of course the mega-smash “Frozen” have all helped reestablish the Disney Animation brand as a creative and financial powerhouse over the past seven years.

Now, as the studio prepares to debut its next feature “Moana” this fall, fans and critics alike are eagerly waiting to see what Disney has cooked up for its second non-Pixar animated release of 2016.

Earlier this summer I was fortunate enough to attend a behind-the-scenes preview of “Moana” at the Walt Disney Animation Studios’ Tujunga campus in North Hollywood. At the event, media were treated to glimpses of the film as a work-in-progress, and had the chance to listen in as members of the creative team discussed the process of bringing such an ambitious, epic movie to life.

On hand were directors John Musker and Ron Clements (“The Little Mermaid,” “Aladdin”) who gave a brief intro to the day’s tour. The duo talked about what appealed to them about the story of a young girl from the Pacific Islands who sets out on an adventure inspired by Polynesian mythology. “Voyaging is a real source of pride for Pacific Islanders, a part of their identity. They were, and continue to be, some of the greatest explorers of all time,” said Clements.

The tale of “Moana” picks up a millennium later, long after the voyages have stopped. Our protagonist, the adventurous young Moana, want to know why. She sets off on a journey that will thrust her headlong into danger and excitement, and pair her up with the pompous demigod Maui (played by Dwayne Johnson) who reluctantly tags along on Moana’s quest to save her people.

The rest of the day’s presentations were divided into five subsections, each exploring one aspect of work that goes into developing and producing an animated movie of this scale.

One of the most important roles in the production of a Disney feature is that of the Story department. Made up of both screenwriters and storyboard artists, the Story team is responsible for shaping both the plot and action of the movie itself.

Research is key in developing a story with such a rich background in existing mythology, and so the Story team made several extended trips to the Pacific Islands to gather information and immerse themselves in the culture.

What Disney movie would be complete without a strong main character? Moana is brave, skilled, and stylish all at the same time. Her father pressures her to remain in her home village, but Moana feels the call of the ocean and her ancestors. Eventually the threat of catastrophe necessitates her following her heart and pursuing a daring ocean adventure to reclaim an ancient gem called the Heart of Te Fiti.

We were treated to a presentation describing how the design of the Moana character evolved, and how her facial features and costumes reflected the look of the young women of the Pacific Islands that the Disney creative team encountered on their research trips.

Water has always been a difficult thing to replicate in CGI animation, and since “Moana” is almost entirely set on the ocean, the visual effects team had to come up with new ways to mimic the way water moves and splashes in real life. Not to mention the fact that the ocean in this movie is a living, breathing, anthropomorphized character who interacts with Moana in emotional ways.

Moana’s sidekick on this journey is sure to be a standout character, mixing humor with bravado and the endlessly charming vocal talents of Dwayne Johnson. One of the more interesting aspects of Maui are his sentient tattoos, animated using traditional techniques and used as a shorthand in the movie to represent his inner thoughts and conscience.

Maui also possesses the uncanny ability to transform himself into human-sized animals, including a hawk as pictured below. As expected, his animal forms still retain the essential characteristics of Maui’s face and his recognizably-overconfident smirk.

THE ISLANDS OF “MOANA”

Finally, it probably goes without saying that location plays a huge role in “Moana,” thanks to its lush, intricately-designed Pacific Island setting.

The environments team also took research trips to the region, in order to get a taste of how color, shapes, and vegetation combined to generate the surroundings of the Pacific Islands.

The day’s festivities culminated with a Pacific Island-style dance demonstration in the lobby of the animation studios building on Disney’s Tujunga campus. It was a great way to cap off a fascinating day peeking behind the scenes of Walt Disney Animation’s new tropical-themed seafaring adventure.

All still images in the body of this article are Copyright 2016 Disney.