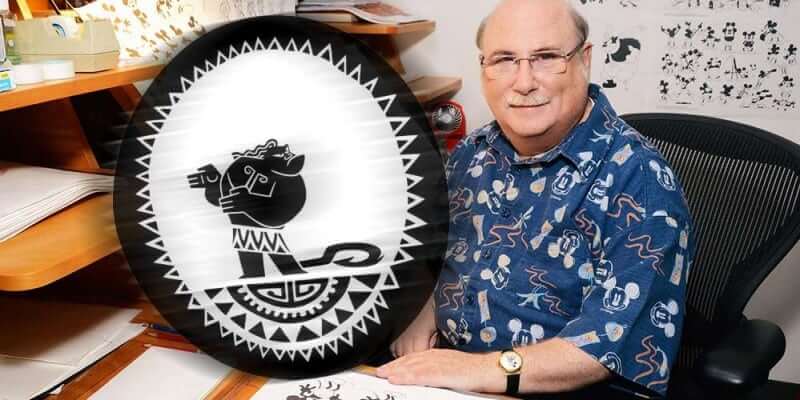 Eric Goldberg has been working steadily in the animation industry since the late 1970s, with major contributions to both Walt Disney and Warner Bros. projects. He oversaw work on the Genie in “Aladdin”, Louis the Alligator in “The Princess and the Frog”, and even co-directed the movie “Pocahontas”.

This week I had the pleasure of talking to Mr. Goldberg over the phone about his latest project “Moana”, on which he was in charge of the hand-drawn 2D animation for Maui’s living tattoo, affectionately nicknamed Mini-Maui.

ITM:  Now that “Moana” has played in theaters and is arriving on home video, what’s your overall reaction to the finished product and to the reception that the movie received from audiences?

Eric Goldberg:  I think the film turned out very, very well. And I’m not just saying that because I worked on it. I think it’s got tons of heart. I think Moana and Maui are great characters. It has the tone of a John [Musker] and Ron [Clements] movie, which I love, where it can be funny as well as being heart-tugging. And I think from what I can tell, for the most part, audiences have liked it very much. It’s always gratifying to work on something that you know millions of people are seeing and enjoying.

ITM:  Speaking of working with “Moana” directors Ron and John, can you tell us a little more about the appeal of being on a project with those two?

Goldberg:  Ron and John are two of the greatest animation directors ever to walk the Earth. And it’s because they have such an inherent understanding of what they can do as directors and what the value of entertainment, Disney-style, is. They just have a complete, thorough understanding of the process. And they are very, very, very collaborative.

I’ve been very fortunate to work with them on several pictures, because they will always allow me to have input in terms of what the characters are doing. I love working that way with them. They kind of give me my head, if you will. And yet a lot of it just comes from having a good time working with them in the room. They like to laugh, they like to bat ideas back and forth, and at this point animators like myself and Mark Henn and Randy Haycock– it’s almost like animation shorthand speak, working with John and Ron. They can say certain things and they don’t even have to finish the sentence, and we’ll know what they’re talking about because we’ve been down the pike with them on several pictures. And it’s always great.

But I loved actually seeing them bring their sensibility to the CG animators, as well. I think that was really fun too, because they will always go for pushing the clarity of an expression, or the strength of a pose, or the humor of an idea. And just watching them work with the CG guys– they work exactly with them in the same way that they would work with us hand-drawn fellers.

ITM:  One of the most popular sequences in “Moana” is the “You’re Welcome” musical number, which features plenty of Mini-Maui. Can you talk about the process of putting together that scene?

Goldberg:  Well first of all, I have to credit the story artists. They are the ones who really initially mapped out that sequence. And even from the get-go, we knew it was going to be a fun, lively song from Lin-Manuel Miranda’s lyrics. It was going to be a fun song to animate. And it’s interesting because it came into production at a time when Mini-Maui’s role was increasing in the movie. So as they were boarding it they were just adding more and more hand-drawn animation into the song. And I’m like, “Yeah, bring it on!” [laughs] “That’s great!” And they gave us lots of opportunities.

To a certain extent, they would board certain ideas, but they wouldn’t really come across until we figured out how we could execute them. It doesn’t sound like it’s a technical nightmare, but the scene where Mini-Maui is being passed from hand-to-hand-to-hand and then flipped up into the boat and then pulls up the island– that took about a week for me to engineer the layouts on that scene and make it all come together.

The timing for the music and all of that– they might indicate that Mini-Maui is tap dancing, but nobody’s saying how he should tap dance. That’s down to me. And so the storyboard pass was a great basis and jumping-off point. And in some cases things just worked directly from the storyboards, beautifully. They’d get a laugh in story and they’d get a laugh in animation. One of those is when Mini-Maui pulls down the scoreboard. I didn’t change an iota of that. It’s exactly the way it was boarded. It’s like, “If it’s not broke, don’t fix it.”

ITM:  Mini-Maui serves as Maui’s conscience, and yet he’s a silent character without any dialogue. How do you convey that kind of characterization using only facial expression and body physicality?

Goldberg:  The Disney [Animation] Studio has always specialized in that– look at Dopey in “Snow White” or, more recently, the carpet in “Aladdin”– they’re both great pantomime characters, and both very very expressive without needing dialogue. In the case of Mini-Maui, yes, we wanted him to be his conscience, but a conscience can sometimes be a kind of namby-pamby do-gooder, too. And we didn’t want that.

Specifically, John Lasseter wanted to see him be a little snarky. He wanted to see him able to give big Maui an elbow in the ribs once in a while, especially when he’s getting too big for his britches. And I had been thinking along similar lines for the character, so when I heard that, I just thought, “Great, I’m going to enjoy this.” And so those opportunities that [Maui] had to actually give it back to Mini-Maui were really fun.

One of my favorites that I got to work into the movie is when he claims he’s not afraid of the Heart of Te Fiti, and you cut down to Mini Maui and he’s biting his nails and running around in a panic. To be able to have that kind of input on a scene like that, and to be able to pull it off in the animation, is really really fun. The relationship that the two of [those characters] had, had to be real.

There’s certain techniques that you use for a pantomime character: you can strengthen the poses, you have to really go for clarity and make sure that people can read what the character is thinking and feeling even though you’re dealing with silent graphics. A lot of it comes with the timing.

What I really like about their relationship is that it’s clear that even though Mini-Maui doesn’t talk, they’re having a conversation together. They are actually on the same page, they’re communicating to one another. And that’s a really fun thing to try and bring off.

ITM:  I have to ask you about something that I got a big kick out of last year: your couch gag for “The Simpsons”. How did that come about?

Goldberg:  Let’s just say the studio gave me permission. [laughs] But it had actually been percolating for a few years. I was at an Annie Awards and [“Simpsons” creator] Matt Groening came up to me and said, “Do you want to do a couch gag?” And I said, “Hell, yeah.” And that was the one I came up with.

ITM:  Another short piece that you directed was the “Rhapsody in Blue” segment for “Fantasia 2000”, which is one of my favorites. Can you talk about putting that together?

Goldberg:  “Rhapsody in Blue” has always been one of my favorite pieces of classical music, and how it evokes New York has always been very near and dear to me. My wife Susan and I met in New York, and to our certain extent [the short is] our love letter to New York City, even though it takes place in the 1930s. There’s a lot of things that we remember about the New York that we lived in at various times.

Basically what happened was they were doing “Fantasia Continued”. It wasn’t even called “Fantasia 2000” at that time. And I had been wanting to make this piece for like seven years. We had talked to [cartoonist] Al Hirschfeld about possibly designing it, and he eventually gave us permission that if the project went forward, we could adapt any of his existing work, which was wonderful. Working with him was wonderful. He was our official artistic consultant. I can’t think of two things that express New York better than Hirschfeld and [“Rhapsody in Blue” composer George] Gershwin. That’s kind of a one-two punch, actually.

One thing that always struck me about living in urban areas is that people constantly affect one another in the hustle and bustle of an urban environment, without even realizing how profoundly they might be affecting one another, and that’s really what I wanted the piece to be about. [Disney] had said, “Maybe Gershwin is too modern a composer for ‘Fantasia’.” So they let us start it as a stand-alone short, which was being done concurrently with the “Fantasia” schedule, and we happened to be the lucky beneficiaries of inheriting the crew from “Kingdom of the Sun”, when it was down for retooling and came back as “The Emperor’s New Groove”. They had an entire animation crew with nothing to do, so they finally said, “Okay, go ahead and make it as a stand-alone short.”

So we started down that road and we were also working concurrently on “Fantasia 2000”. We had a screening where it was fifty percent of the original sequences and fifty percent of the new sequences, and it just didn’t work. It didn’t work because stylistically, it was so different, both in the timing and in the draftsmanship. Things had moved on since 1940, and so it was kind of an uncomfortable mix. So at the time, while we’re making “Rhapsody in Blue” as a stand-alone short, the lights come up and Roy Disney turns around and says, “So Eric, is ‘Rhapsody in Blue’ going to be ready in time for ‘Fantasia 2000’?” And I said, “Yes, actually it is!” [laughs] So we managed to get into “Fantasia” after all, when Roy realized that that was actually its proper home.

ITM:  The art of animation has changed drastically since you began with Disney. What are the pros and cons, the advantages and disadvantages, of working with CGI animation on something like “Moana” versus more traditional cel animation techniques?

Goldberg:  I think both media, CG animation and traditional animation, have their strong suits. I think both are great at various things. And what I love these days is blurring the line. I can see a lot of the CG animators getting more enthusiastic about using traditional approaches to their CG animation. I think you can see it in “Moana”, actually. I think you can look at, say, Moana’s facial expressions and her poses, and you can see that that’s got quite a bit of 2D influence on it. They’re caricatured a little bit more. They’re pushed a little farther. The poses are a little stronger. And I think a lot of that has to do with John and Ron themselves having a 2D influence on the film as well. I think both are great. Both can coexist; that’s what I say.

Disney’s “Moana” is already available on Digital HD and Disney Movies Anywhere. It will also be released to Blu-ray and DVD this coming Tuesday, March 7th.

Comments Off on INTERVIEW: How Disney’s Eric Goldberg made ‘Mini-Maui’ 2D tattoo move in “Moana” (and more from legendary animator)