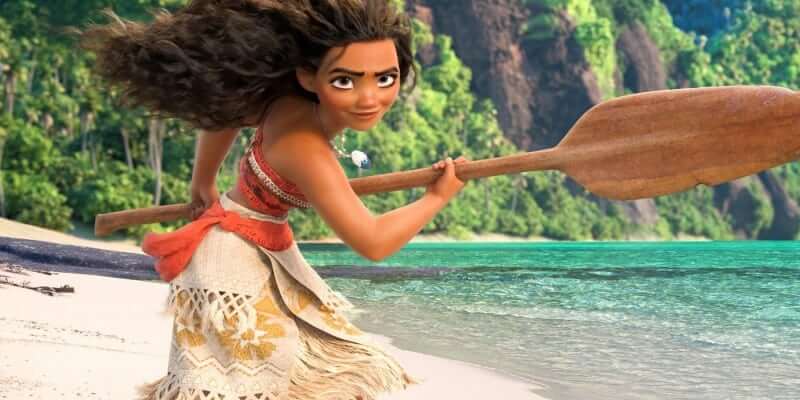 Disney’s latest animated feature “Moana” is hitting the home video market this month, and we’ve put together this fun series of interviews in celebration of the occasion. So far we’ve already talked with actress Rachel House (Gramma Tala) and animator Eric Goldberg (director of Mini-Maui).

This week I spoke with Disney costume designer Neya Bové over the phone to discuss her work putting together the outfit for the movie’s title character.

ITM: Can you give us a little bit of your background with Disney and how you were first brought on to “Moana”?

Neysa Bové: I’m actually pretty brand new to working here at Disney. I’ve been here for two years now, and I got brough on specifically to do costume design on “Moana”. I came from Mattel, I was doing toy design there; I was designing Barbie dolls. And so I got a phone call from Disney and they brought me in.

ITM: How early in the development of “Moana” did you join the project?

Bové: I think they were a couple years in, but as you know, they can work on these films [for] up to six years. So I came in at a pretty good time. They had Maui’s costume done, but we were still working on Moana’s costume.

ITM: When you were first brought in, what was your initial approach? In what direction did you want to guide Moana’s costume design?

Bové: Coming from a background in fashion design, I wanted to bring what I know. I noticed the costumes were looking a little plain. And based on the research we did with the cultures of the people from the [Pacific] Islands, they had so much intricate details in their textiles, and the way they embellished their costumes in real life, that I thought, “Hey, we need to bring this onto our characters.” So we started from there.

ITM: The production team took a few research trips to the islands and brought back plenty of photos and video. How did you implement that research in your own costume design work?

Bové: A lot of the inspiration that I got for designing these costumes was from [those] trips. They brought so many references with images, and they brought a few materials back. These definitely set the mood for the whole look. They brought textiles like pandanus and tapa, which is what Moana wears. And we got to see how these feel in real life. You know the grass skirt Moana wears? It’s actually really heavy, but you would not expect that, because it [looks] like it would be light. So there’s different things [like that] that it’s really cool to know in real life.

ITM: When I interviewed producer Osnat Shurer last summer, she mentioned that she had some input on Moana’s costume design. Can you talk about her influence?

Bové: Not only did Osnat have an input, but also the directors [Ron Clements and John Musker] and everybody else working on this. Everybody’s opinion matters, so when we show stuff anybody can spin ideas so we can work together to come up with solutions for these things. And when we’re working on it, like she’s saying, we want to make a costume that makes Moana feel empowering, but also speaks to her culture. And that’s why I brought in the embroidery and the beautiful textile design on her bodice and her sash, to give it a little bit more life and authenticity. And then her necklace just brings it all together, making a strong woman with that costume.

ITM: Can you talk a little bit more about working with Ron and John? Everyone always seems to have great things to say about them.

Bové: We had so much feedback from [those] guys. [They] know what they want, which is great for any designer to get that kind of feedback. They have very specific things that they want from these costumes and sometimes you could present something that maybe they didn’t think about, and they’ll let you take a stab at it. So it’s really nice to be able to work with someone that has been doing this for so long, but they’re open to try new things.

ITM: Did you inspiration from any of their previous films, and were you already a fan of Disney in general?

Bové: I’m a big Disney fan, and I grew up with Disney films in Spain. I would watch them in Spanish. My favorite movie was “The Little Mermaid”, and I remember how magical it was for me as a child. So now being able to do that for other children and adults, it just gives you inspiration to remember that. Because once we’re adults, we tend to be a little more cynical, and you have to remember that you’re going to inspire another little kid out there, so to keep that in mind. So that’s how I got inspired [by] some of the films they did.

ITM: Can you describe the technical process of going from your initial designs to actually getting the costumes on the characters in the computer?

Bové: You would have the drawing stage, where you get your drawing approved, which then moves to modeling. And the modeling department basically does a digital sculpture of this costume. And then they move to the simulation department, and they’re the ones that add that weight and gravity to the costume so it feels like real life. But it’s so technical because, like I was telling you before, feeling the skirt in real life, they’re like, “Okay, it’s heavy.” So when they’re simming the skirt, you have to keep that in mind. It’s good to have all these materials in real life so you know how they behave. And then after sim, then it goes to animation I believe, and then they animate the costumes with the characters.

ITM: Is there a part of the process where you’re actually physically putting the costume on a real-life model?

Bové: Well, with a material like tapa, which is what Moana wears on her top and sash, it’s a material that you can’t really buy in a fabric store here in the U.S. The closest thing to it that I could get access to right away is a napkin. So I would grab a napkin or a paper towel and I would drape it on a Barbie doll. And that’s how I was able to see how these clothes could be draped and manipulated. And then I would show those to our different departments so they could make it digitally. But it’s sort of like pattern-making with napkins.

ITM: What was your reaction when you finally got to see the finished movie? How do you feel your designs looked up on the big screen?

ITM: Tell me about your featurette on the “Moana” home video release.

Bové: I got really lucky because I don’t think they’ve ever done this before. So I was like, “Cool! That sounds awesome.” We did a piece on island fashion, and it’s about the work I got to do on “Moana”. Once you get to watch it, you’ll come on board with me for one day and pretend you’re designing with me and see what it’s all about.

ITM: As a final thought, what was your overall experience like working on “Moana”

Bové: My overall experience was just different for me, because again, I was brand new coming into animation so I was learning all kinds of stuff. It feels like being back in school, and you are learning so much about animation in every single department. And then when you can bring something to the table that these very talented people can take away and get inspired by, that just hit a really good spot for me. It felt good to be able to collaborate with them.

ITM: What do you hope viewers take away from the movie and from your costumes?

Bové: I think to open up their eyes to see what other cultures are like. For me, it was definitely that. It was taking a deep dive into history with these different cultures, and how beautiful it is to see the different fabrics they use, and the execution. And I think we can take away that from this film. You can even freeze-frame Moana’s dancing, and you can see all the different details that are on just her skirt. So every scene you see has a different piece of detail you can look at.

ITM: Your next project for Disney is “Gigantic”. What can you tell us about that?

Bové: Well, it’s Disney’s take on the story of “Jack and the Beanstalk”, and I think costume-wise it’s going to be unbelievable. So just wait for that, and that’s all I’m going to tell you about that. [laughs]