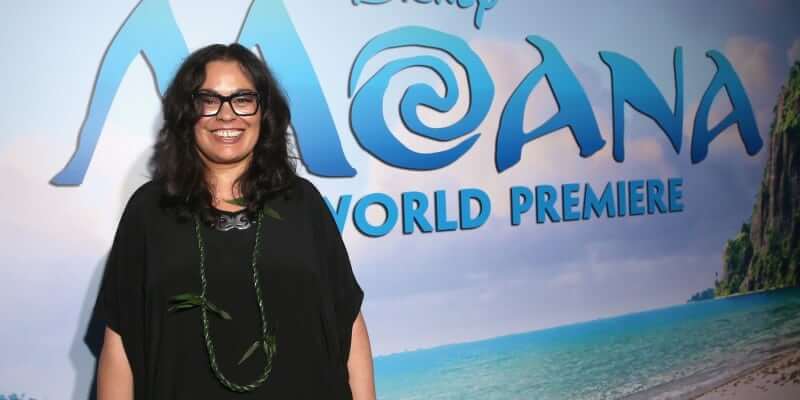 New Zealand-based actress Rachel House has been appearing in television and movies since the late 1990s, with a breakout supporting role in the acclaimed 2002 film “Whale Rider”. This past fall she starred in Disney’s most recent animated feature “Moana” as the voice of village elder Gramma Tala.

I had the wonderful opportunity to speak with Ms. House over the phone from her home in New Zealand this past week in celebration of the release of “Moana” on home video. Enjoy the interview below!

ITM:  Did you grow up on Disney?

Rachel House:  Of course. But we only had one [television] channel in my home town when I was very young. Then as I got older we finally got another one. And with that second channel came “The Wonderful World of Disney”, which happened every Sunday night at 6:00, I think. So we’d be riding our bikes around the neighborhood, and we’d count down to “Wonderful World of Disney”. [Then] we’d drop our bikes and run. It was the highlight of our week. And of course I watched all of the wonderful [Disney] films as I grew up. So it felt like a real honor [to be cast in a Disney movie].

And the first time I went to the [Disney Animation Studios in Burbank], down the corridors were those extraordinary images from all of those beautiful films: “Bambi” and “Dumbo” [for example]. It felt like I was walking into a legacy, which felt very special at the time.

ITM:  You’ve worked with fellow New Zealand-born writer/director Taika Waititi before (on “Eagle vs. Shark” and “Hunt for the Wilderpeople”), and he wrote the first draft of the “Moana” screenplay. Did you come on board this project through him?

House:  No, but I’ve had people think that. It was an ordinary audition process.

ITM:  Disney made it known that it was very important to them to cast actors from the Pacific Islands in “Moana”. How did you feel about that dedication to authenticity?

House:  Companies don’t always do that, so I was very impressed. And just the fact that Taika was on board already, and that they were going to such trouble to find these actors from the Pacific made me feel very heartened.

ITM:  Once you found out you had gotten the role of Gramma Tala, what was the actual process of recording your voice for the movie?

House:  Well, I was very lucky to be flown [to California] over the course of about eighteen months. I think it was about five or six times. Obviously it wasn’t a huge role, but they are so precise about what they want. So often I’d go back to re-record dialogue, or they’d have made slight alterations so I’d have to go back for that. And then eventually they recorded me here in New Zealand. They found a studio that fit into their criteria in Aukland.

I’m sure you know this, but we didn’t have the other actors in the studio with us. We had [screenwriter] Jared Bush, actually. He was the main person in the studio in terms of who we acted with. So that was fun.

ITM:  Were you inspired by any of your own family members in approaching the role of Gramma Tala?

House:  Of course. My mother is in her mid-eighties. She’s actually Scottish, although she has an English accent because her mother was English. She still has the qualities of many of our older Maori women. That’s sort of a hard thing to explain, but she was very much immersed in Maori culture since she arrived in New Zealand. So she has that wonderful quality that a lot of older people do, which is that they are quite free. And I think that’s what I loved about Tala the most, is that she was so free. She didn’t care too much about what people thought. She’s a self-proclaimed “crazy lady”, so she was in charge of that label, in my opinion.

But also, there are so many inspiring older Maori women in our country, so there was no shortage of inspiration.

ITM:  Was there anything about yourself that you brought to the role, that you related to in the character?

House:  Her wisdom, and her approach to Moana. I love how often, especially in our culture, the wise older people in our community don’t give you a direct answer. They give you enough of an answer that you still have to work it out. I feel like Gramma Tala was like that, and I related to that. I don’t know that I’m particularly like that, but I certainly admire that quality.

ITM:  You have a song in the movie (a verse of “Where You Are”). Was that presented to you early on or did that come in later in the process?

House:  I believe there were a few songs that they had in mind, but as the story strengthened, they had to lose some of the songs, as is always the case. But the song that I ended up with, I’m not sure when that was written. I know that there was another one, a lullaby, that didn’t make it into the film. That’s because the story changed. But I love the songs.

ITM:  Did you already have a background in music?

House:  I trained as an opera singer. It sounds a lot flashier than it is. It was only for a period of about a year and a half, before I realized that I may not have a career in opera singing. My mother desperately wanted me to be the next Kiri Te Kanawa. I don’t know if you’ve heard of her; she’s a very famous opera singer from here. It didn’t work out. [laughs]

But I also got involved with a popular band in the 90s and did some backup singing for them as well. So [singing is] not foreign to me at all, but I don’t consider myself to be a singer particularly.

ITM:  Gramma Tala also provides some of the comic relief early on in the movie, before the character of Maui is introduced. Did you appreciate that element of the role?

House:  I loved that. I love how funny Gramma Tala is. It’s that wonderful wry humor that a lot of our elderly people have. So it was a real joy, absolutely. She really cracked me up. It was a great character in that respect, when it came to the comedy. And I think a lot of that came from her not really caring what people think. Because she’s so free, she gets to say whatever she wants.

ITM:  You’re also the first character we hear speaking in the movie, and the introduction to the world and the mythology of the story. Did you feel a bigger responsibility being in that important of a role?

House:  You know, I didn’t think about it, to be absolutely honest with you.. Many actors don’t think too much about those sorts of things because otherwise it’s a little distracting.

The way that she tells that story— [in] Polynesian culture, we are great orators, and we have relied on the passing on of stories through oratory, because we didn’t write things down. For so many years, we didn’t have that, so our storytelling was always passed on orally. I suppose if anything, I related to that aspect: here is a story that was being passed down to the younger generations. And so that was the important part for me, really, is that that was her role, and my part as well—that of the orator. The passing down of our history.

ITM:  And finally, what was your reaction when you finally had the chance to see “Moana”? Did you get to attend the premiere here in Hollywood?

House:  I did! I actually saw a rough cut early on, and was quite gobsmacked. But as I said, it was a rough cut. So when I saw the first screening, which was a private screening at the studio, I was completely blown away by the animation, and the sound, and the singing. What an extraordinarily beautiful film.

It wasn’t until the actual premiere that I really caught up with all the other fantastic work in it, but the animation is just mind-blowing. I couldn’t get over it. It was so beautiful.

Disney’s “Moana” is already available on Digital HD and Disney Movies Anywhere, and will be released to Blu-ray and DVD on Tuesday, March 7th.

Comments Off on INTERVIEW: Actress Rachel House on playing the wise Gramma Tala in “Moana”