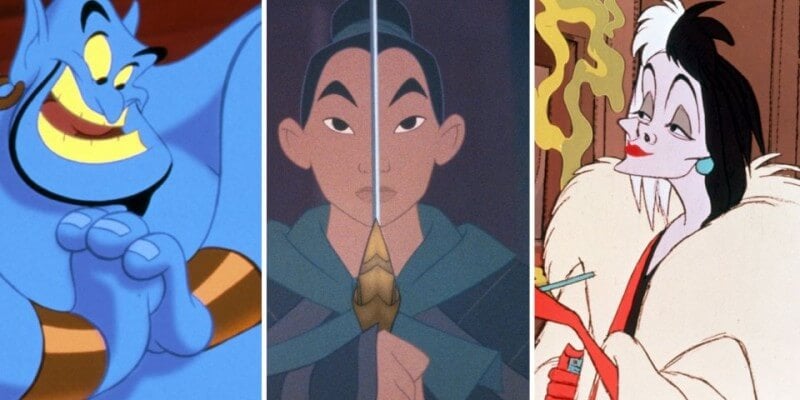 Disney Studios has been hugely successful lately with their live-action remakes of their old animation classical movies such as Alice in Wonderland, The Jungle Book and my personal favorite: Cinderella.

The future is looking bright for these type of movies as Disney currently has 16 more of them planned, all in different stages of production. Thanks to Hollywood Reporter, we have a great list of all the upcoming “animation to live-action” movies we will see in the future! This is a sequel to Tim Burton’s Alice in Wonderland from 2010 and is originally based on Disney’s original 1951 movie Alice in Wonderland. Starring Johnny Depp and Sasha Baron Cohen Alice Through the Looking Glass sure looks to be just as crazy as its the first one.

Here is a remake that nobody saw coming, Pete’s Dragon. The original 1977 movie about the dragon Elliott did not receive much attention but nonetheless showed how great Disney was at combining live-action and animation back in the day. The remake will feature Bryce Dallas Howard and Robert Redford with quite a different look for the dragon. Of all the remakes on the way this is one that has the most hype surrounding it. You just don’t take a classic from Disney’s renaissance period and make a remake of it without having people’s expectations be really high. So far the casting choices Disney has revealed have been splendid with Harry Potter star Emma Watson taking the role as our heroine Belle. In other roles we have Emma Thompson as Mrs. Potts, Ewan McGregor as Lumiere and Ian McKellen as Cogsworth. The hotness level will also rise with Luke Evans and Dan Stevens fighting for Belle’s affection as Gaston and The Beast. This movie has already received a live-action remake once, starring Glenn Close, but apparently Disney felt it was time to give it another shot. Just as like with Maleficent this remake will tell the villain’s story and focus on Cruella de Vil. Emma Stone is apparently in talk to star as Cruella and the studio is eyeing to shoot sometime in late 2016.

Talking about Maleficent, she will be back on the big screen herself soon too. The first Maleficent movie grossed $758 million at the international box office so it comes as no surprise that Disney wants to try their hand on a second one. Angelina Jolie is rumored to return and quite frankly I couldn’t see anyone else doing the role justice. The first live-action remake of the Jungle Book may just have premiered last weekend but a sequel has already been green lit by the studio. Again money talks and the first movie earned $314 million at the international box office during its opening weekend. Director Jon Favreau is in talks to return for a second go at Mowgli and Baloo’s story. We all want to go return to Neverland and so does Disney Studios. This live-action remake will be based on Disney’s 1953 animated movie and David Lowery will direct. This movie is in its early stages of development but if we are lucky Pinocchio will get to become a real boy soon. The original animated Pinocchio movie is quite scary to some but luckily this new remake will only be loosely based on the animated classic. Tim Burton will get another shot at remaking a Disney animated movie with his take on Dumbo that will feature both CG and live-action. The story will be quite different from its animated tale with the script featuring a “family story that will parallel the circus Elephant’s odyssey”. This live-action remake of Sword in the Stone will have ties to sword fighting as the writer of the script is current Game of Thrones writer-producer Bryan Cogman. The 1963 animated movie was the last movie Disney Studios released before Walt Disney’s death in 1966 and was about the young boy Arthur who wanted to become a knight. Warrior Mulan will get yet another chance to show her skills as a soldier in this live-action retelling of her story. Disney has bought a script by writing team Elizabeth Martin and Lauren Hynek. A tale of Winnie’s pal Christopher Robin returning as an adult to revisit his hangout in the Hundred Acre Woods is in the works at Disney. The writer Alex Ross Perry is tied to the live-action project. We are certain that honey will somehow play a part too! Yes, Peter Pan’s pixie friend Tinker Bell is also going to get her own movie. Big names such as Reese Witherspoon and Victoria Strouse, who wrote the script for Pixar’s upcoming film Finding Dory, is attached to the project that will be an origin story of the cute but feisty little fairy. Snow White and the Seven Dwarfs was the movie that started it all for Disney so it doesn’t come as a shock that they would look back at this fairy tale for some new inspiration. Snow White’s sister, Rose Red, did not appear in the animated classic but she did have a role in the original Grimm’s fairytales. This live-action remake will play around a bit with the tale and have Snow White takes a bite from the iconic poison apple and fall into her deep sleep. Her estranged sister, Rose Red, will instead of the Prince be the hero of the story and undertake a dangerous quest with Grumpy and the other dwarves to find a way to break the curse. Disney’s animated movie Aladdin definitely had a breakout star with the Genie, as voiced by the late Robin Williams. This live-action remake will focus on the live of Genie and how he ended up in that cursed lamp. The adventure comedy will be written by Damian Shannon and Mark Swift. The prince in Disney movies such as Cinderella and Snow White often get regulated to just a supporting character to the much more fairer princesses. But in this script by Matt Fogel that Disney has bought, the prince stereotype will get a new spin.

Which Disney live-action movie are you most looking forward to?