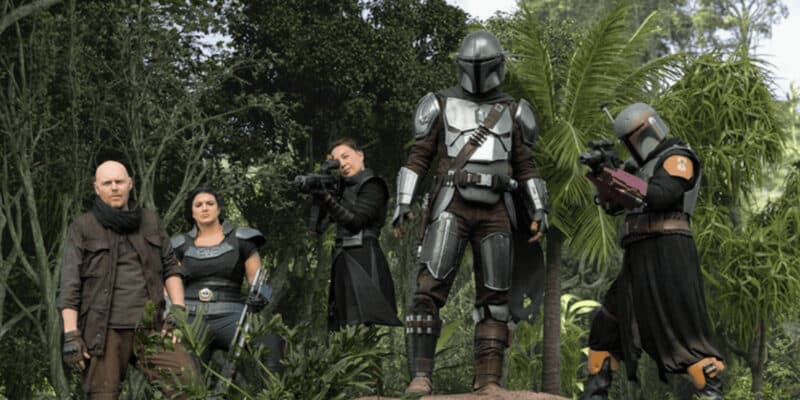 With the massive success of The Mandalorian, it wouldn’t be a bad idea…

Though the star of other successful projects, Jon Favreau’s The Mandalorian introduced Pedro Pascal to an entirely new demographic. The samurai/space western brought the star of Game of Thrones and Narcos to the Galaxy Far, Far Away, and the Disney sphere. With the negative fan reaction to contemporary Star Wars releases, no one could have guessed that The Mandalorian would be the breakout hit that it has been!

Returning the franchise to its roots, season one of The Mandalorian offered fans a completely original story. A space western with old-world samurai movie themes, the story followed a new bounty hunter, Din Djarin/Mando (Pedro Pascal), as he fought to survive in a post-Empire Galaxy. Along the way, he encounters one of the cutest creations from Star Wars – The Child/Baby Yoda/Grogu (himself).

The first season didn’t even rely on any cameos, and the only lightsaber present was wielded by a non-Force user and a villain to boot! This paved the way for an impressive second season that brought many fan-favorite characters from Dave Filoni’s Clone Wars to live-action, including Bo-Katan Kryze (Katee Sackhoff), Luke Skywalker (Mark Hamill), and later on, in The Book of Boba Fett, Cade Bane (Corey Burton).

Throughout The Mandalorian, Pedro Pascal carried the action and story with outstanding skill. One of the most valuable tools for any film actor is facial expression, and Pascal has had very little opportunity to use that, but somehow, still helps the audience feel what he’s feeling. It takes a very skilled actor to pull something like that off, and one that could have the range to jump franchises!

In a recent Wired interview, reported by The Direct, Pascal was asked almost dismissively if he had “popped into national consciousness” earlier if he would have been interested in being a part of the Marvel Cinematic Universe, “the cape and the CGI and all that?” Pascal responded briefly but clearly:

When pressed further about being a hero in a “tense political moment,” Pedro Pascal opened up a bit more and shared his views on humanity at large, despite setbacks in the modern era:

“There’s so many ways to misunderstand people and to forget that, at the end of the day, your neighbor is very likely to give you the shirt off their own back. The interchanges that you have with strangers are, more often than not, human…I just remember that everybody I come in contact with is sort of, in their own way, heroically kind.”

Could audiences see a “heroically kind” Pedro Pascal as part of the Marvel Cinematic Universe soon? With the huge slate planned for Marvel Studios, there are any number of roles the actor could fill. Until then, fans can count on seeing Pascal in the upcoming season of The Mandalorian.

The third season of The Mandalorian premieres on Disney+ on March 1, 2023, and stars Pedro Pascal as Din Djarin/The Mandalorian, Katee Sackhoff as Bo-Katan Kryze, Grogu as himself, Giancarlo Esposito as Moff Gideon, and Carl Weathers as Greef Karga. Things will be coming to the boiling point in this third season as Mando (Pascal) returns to Mandalore to reconcile his past and face the future.

What do you think of Pedro Pascal in the Marvel Cinematic Universe? Let us know in the comments below!