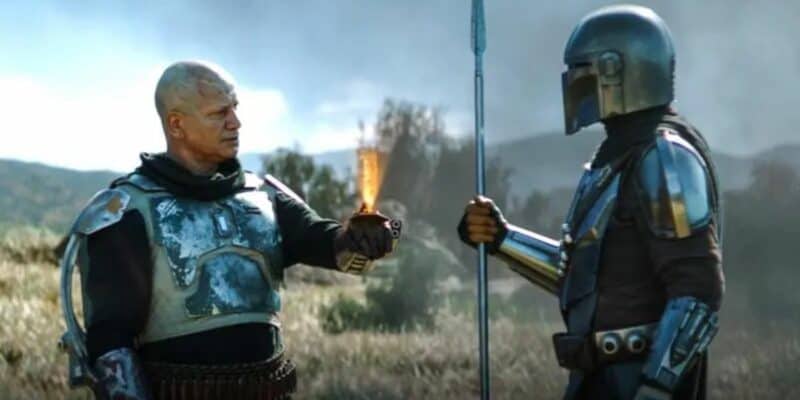 Star Wars can’t help but continue making more Disney+ series, but they have to connect to Pedro Pascal’s The Mandalorian.

Since 2019, Disney+ has created several Disney+ series with more on the way, and a lot of them are starting to explore every corner of the galaxy in the years between Star Wars: Episode VI — Return of the Jedi (1983) and Star Wars: Episode VII — The Force Awakens (2015).  With a 30ish-year gap between the two movies, Star Wars has a lot of room to tell more stories about the Remnants of the Empire and the start of the New Republic.

Before Star Wars removed its entire library of books and comics from canon, Timothy Zahn wrote what would be considered the Legends version of the Sequel Trilogy. Since George Lucas didn’t immediately make a sequel to continue Luke, Han, and Leia’s story, Zahn wrote three books to explore what happened after Return of the Jedi.

Thrawn was the main villain and made the group of heroes struggle to keep the galaxy safe and challenge in new ways as he wasn’t prepared to face a genius like Thrawn. Now that the Star Wars canon has changed, the Sequel Trilogy exists, but far later, leaving room for Disney+ to establish a foundation before creating a potential new trilogy that would be more like Zahn’s original vision for the characters.

Din Djarin and Grogu had changed the Star Wars universe completely with The Mandalorian as fans grew to love the series during a time when fans struggled to like anything Disney created. The Sequel Trilogy wasn’t what fans wanted, and The Mandalorian helped explore familiar themes while also bringing iconic characters like Boba Fett and Ahsoka Tano into the series in a meaningful way.

Related: After 10 Years, Two Fan-Favorite Jedi Are Finally About to Be Reunited

Now, fans have started calling the series and its spin-offs the “Mandoverse” as The Book of Boba Fett, Skeleton Crew, and Ahsoka continue to explore the new era of Star Wars as spin-offs. Fans are very excited for Season 3 of The Mandalorian and for Ahsoka to explore what happened to Ezra Bridger and Grand Admiral Thrawn.

The code name for the project is “Ghost Track 17,” which immediately seems like Hera Syndulla’s Ghost might have a large role in the new series. As The Mandalorian grew in popularity and more spin-offs were announced, Kathleen Kennedy did confirm that a crossover event was imminent. This new project could be the crossover event fans have been waiting for, with Thrawn as the iconic villain.

For now, fans will have to wait and see, but The Mandalorian Season 3 will debut in just a few months and reunite fans with Grogu and his shenanigans while Din tries to earn back the right to be called a Mandalorian.

Are you excited about a new Mandalorian project? Let us know how you feel!