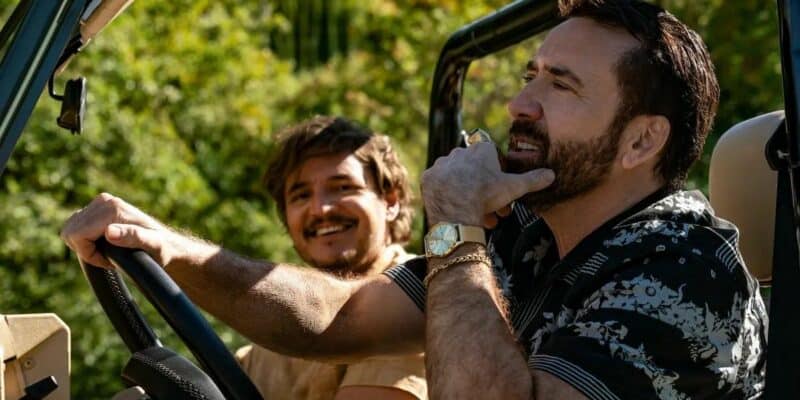 Pedro Pascal, the actor best known for portraying Din Djarin/The Mandalorian in the Star Wars television series of the same name, recently revealed that he wanted action-movie legend Nicolas Cage to appear alongside him in the faraway galaxy.

Last year, the pair starred in The Unbearable Weight of Massive Talent (2022), a “meta” action-comedy in which billionaire Nicolas Cage super-fan Javi Gutierrez (Pedro Pascal) invites the Hollywood star (Cage) to his birthday party, but together wind up taking on arms dealers.

The chemistry between the two is palpable, and the film definitely leaves you wanting to see more from the unlikely duo. Evidently, Pascal feels the same, because when asked by Yahoo! Entertainment at last year’s D23 Expo if he would like to work with Cage in Star Wars, he said, “I already suggested [it]. I already said he would make a great Mandalorian.”

The Mandalorian (2019) producer, director, and writer Rick Famuyiwa, who was also at the event, then asked: “But would he wear a helmet or not?” Well, Mandalorian or not, the truth is that we’d be happy to see Nicolas Cage play any character in Star Wars.

Now, in a new interview with Yahoo! Entertainment, Cage has broken his silence on Pascal’s comments. While promoting his new film The Old Way (2023), the interviewer brings up Pascal’s comments from Disney’s D23 event, asking Cage if there has been any progress on that front.

Unfortunately, the Con Air (1997) actor’s response is very disappointing, as he reveals that he’s not actually a Star Wars fan. Check out his full comments below, which was shared on the Yahoo! Entertainment interviewer’s official Twitter account:

“No…,” Cage says. “I’m not really down [to appear in Star Wars]. I’m a Trekkie, man. I’m on the Enterprise, that’s where I roll. That’s a fact, I grew up watching Shatner, I thought Pine was terrific in the movies, I think the movies are outstanding, I like the political and the sociological… To me, what I think science fiction is all about… and Star Trek really embraced that. They got into some serious stuff.”

Nicolas Cage does not want to be in The Mandalorian or the Star Wars universe (sorry, Pedro Pascal).

So, it turns out that Cage is a huge Star Trek fan, and as such, it’s unlikely we’ll ever see him appear in The Mandalorian, or elsewhere in the faraway galaxy, for that matter. Should Cage decide “to boldly go where no man has gone before”, it will likely be via the USS Enterprise first.

Check out the official trailer for The Mandalorian Season 3 below:

The Mandalorian Season 3 will premiere on Disney+ on March 1, 2023.

Would you have liked to see Nicolas Cage in Star Wars? What kind of character do you think he could have played? Let us know in the comments down below!